Guys, I would like to introduce you a friend who has smooth skin and slim body. Happy or not? Mangrove Skink (Emoia atrocostata) is one of the most common animals spotted in Sabah mangrove forest. Normally it has smooth and brownish to grayish metallic skin. This small, short-legged lizard is usually less than 1 foot (30cm) long. Like other lizards, it can detech its tail easily as an escape mechanism. 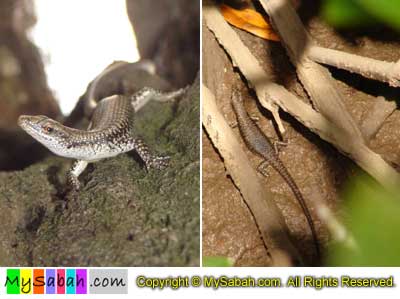 Basically they are everywhere anytime in mangrove forest. I always see dozens of them in KK Wetland Centre, on the broadwalk, under the mangrove root, on the sandy ground, open space… It looks very much like a skink that lives in our garden. In Hakka, we call it “Choa-Ma-Sa”. Choa-Ma-Sa is smaller and got beautiful red stripes on its body, while Mangrove Skink doesn’t. 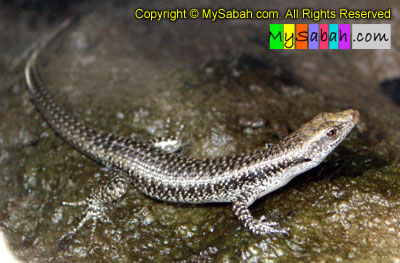 They are timid but not quite afraid of human. They always keep a distance from you. If you come too close, they would jump into the water, so I assume they are good swimmer. During low tide, you can always see plenty of them roaming on the ground to look for small crabs, insect and other food.

I notice that they use only one eye to observe something. What I mean is — they don’t look at you face to face. Instead, they turn their head to side, using only one eye to look at you. I am not sure if they are trying to act cute or what. If you don’t believe me, just look at all the photos shown here.

Other two different skink species that I saw were spotted in Sepilok virgin forest and Klias wetland. The later one is only found in Borneo. 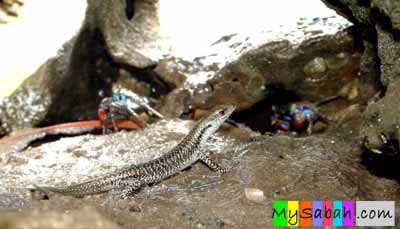