Girls… be careful if you find an ant on your dress, it could be a SPIDER!!! Hahaha… scare or not? This cool ant, no… I mean sipder, is also found in Sabah Borneo. It looks and moves like a normal ant, even the REAL ant also cannot tell the difference. We should call it “SPY-der” instead. If I am not mistaken, this is a type of jumping spiders (family Salticidae) belonging to the genus Myrmarachne.

I discovered it because I was taking some pictures of ants, otherwise I wouldn’t find it. At first, I noticed a funny ant that has a BIG head. Curiosity made me to examine it more closely. It was alerted, so it jumped quickly and hide behind a leaf. I never saw any ant with such agility. And it got 8 legs! We all know that insects such as ant only have 6 legs. This spider is less than 1 cm, so I had to use an additional close-up len to magnify its funny face. 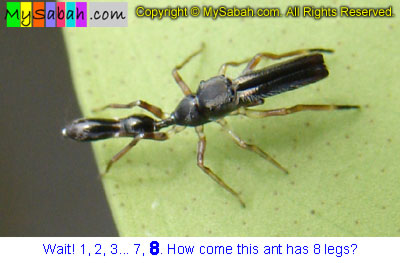 There are two reasons it masquerades as an ant:
1) Most animals do not dare to upset ant, which will risk calling a whole kampung (village) of angry ants to beat them up. By acting and looking like an ant, the ant-mimicking spiders have better chance of survival, as most predators will avoid them like plague.
2) It uses ant disguise to hunt ants. Its deceptive look allows it to get closer to ants. 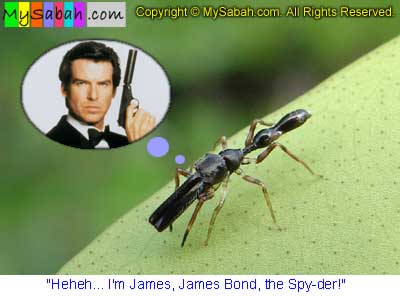 The long “nose” of this ant-mimicking spider seems like the one owned by arthropod Pinocchio who told lie. Malayan Naturalist, Vol 51 No. 1, August 1997 has an interesting description about it:
“This ‘nose’ is in fact a pair of chelicerae (jaws bearing sabre-like fangs) which are normally held together. These oversized chelicerae are a second sexual characteristic… These fangs are also used for killing prey. Spiders normally paralyse their prey by injecting them with venom through ducts inside their fangs…

However, due to the exaggerated length of their fangs, Ant-Mimicking Spiders have lost the ability to inject venom to immobilize prey. They resort to the less elegant method of holding down the prey and stabbing it with their fangs. Also because of their unwieldy chelicerae, feeding is a messy business for the male spiders. They have to stab their prey repeatedly in order to suck up nutrients through the holes.” 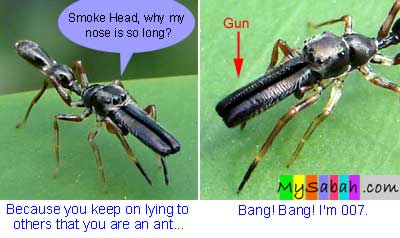 One thought on “Ant-Mimicking Spider”