The carnival was from May 10 to 12 at Gaya Street. Frankly, they had carnivals for Christmas, Chinese New Year, etc., but all look the same to me. Same stalls, same firework, same programme… A bit bored already… The only new stuff is a Rungus longhouse, where handicrafts were sold and traditional Rungus dance was performed regularly.

One thing that caught my attention was the two long queues at the Traffic Police booth, as if there was some big sales going on, always full of people. Seem like there are more drivers kena saman nowadays. This sort of 50% discount promotion really pissed me off. “Good” citizens (like me), who pay on time, will have to pay in FULL, while those who purposely delay payment will get special offer later, WTF. This is how our country “penalises” good citizens and users. If you don’t give them a damn, they will beg you to pay, by giving you deep discount, lucky draw, free gift, etc. So slowly the people learn to be “smart”. The government keeps on blaming Malaysians are “last-minute men”, without realising that they are THE ONE who have been cultivating and promoting such bad habit. 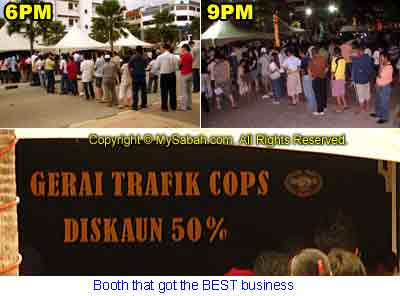 There were still thousands of people came to this event, but relatively less people if compared to previous carnivals. May is a month full of grand events and celebration. Probably people get tired of it. For them, it just looked like a Gaya Street Sunday Market in night time. 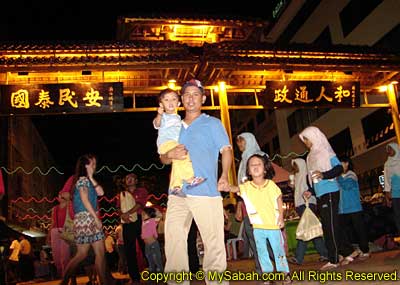 This should be a Harvest Festival celebration for KK district. 15 KadazanDusun ladies were joining the Unduk Ngadau (Harvest Festival Queen) beauty pageant. I didn’t take their photos this time, as it was too dark and the stage was far away for any clear shot. I have too many Unduk Ngadau photos already.

Don’t know why I sound so negative… The carnivals become bigger and bigger, but also becoming more and more formal, with more boring protocol setting. I still prefer it in small stage setting and people can gather near to enjoy the performance. If you want me to sit more than 30 feet away to watch a show, I would prefer watching TV at home. 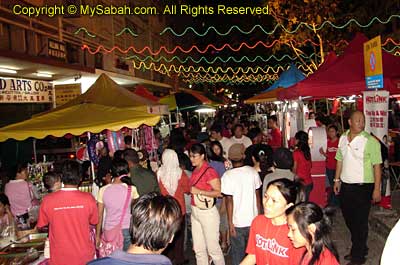 Sabah Art Gallery, a Basket of Creativity and Imagination

Jambatan Tamparuli, the most famous bridge of Sabah