Come and meet Pepsi-Cola, a well-dressed Dachshund dog (characterised by very short legs and long body) that I found in Gaya Street. I guess most KK folk had seen a Dachshund dog dressed in colourful costumes and walked on the street with its master. Most likely it is “Coca-Cola”, the mother of Pepsi-Cola (I wonder if they fight with each other, like Pepsi and Coke).

Pepsi-Cola is only five months old. Her master, Mr Wong, always brings her to Gaya Street every week, in case you would like to ask for autograph from this new celebrity. Unlike her mother (more sociable), she is a bit afraid of strangers, so she might bite people who touch her. But this doesn’t stop children and adults being attracted to come near to play with her. 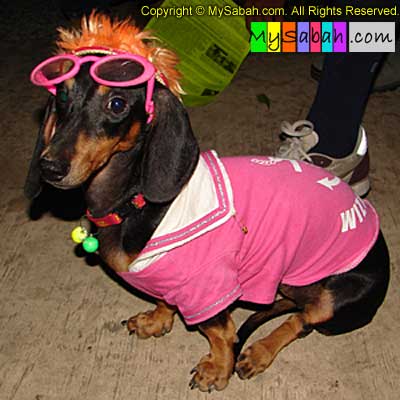 Her mother, Coca-Cola, is probably the most popular dog of Sabah, and it was once on the newspaper for weeks in 2005. This was because her master Mr. Wong decorated Coca-Cola with KadazanDusun costume and Waki (basket) in Kaamatan of year 2005. I was also there and it was so adorable. I think one reporter snapped its picture and published it on Daily Express (I also posted the pictures online but later removed them). Suddenly Coca-Cola became a controversial figure. There were mixed opinions. Some found it insulting to KadazanDusun community, while some thought that it was cute and no big deal about it. 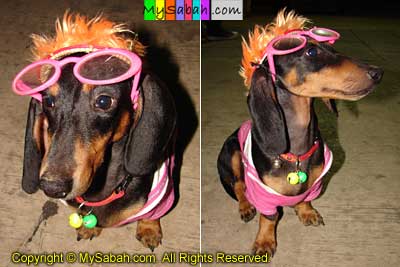 Well, I personally believe Mr Wong had no intention of offending anyone. He also dressed up his dog with Chinese costume in Chinese New Year, and I don’t feel anything wrong with it. Anyway, there are bunch of smart ass who are very CREATIVE in sensualising and politicising everything, so just be careful… Actually pet lovers, especially those orang putih overseas, like to dress up their cats and dogs in fashion costumes. So, be open-minded about it loh… 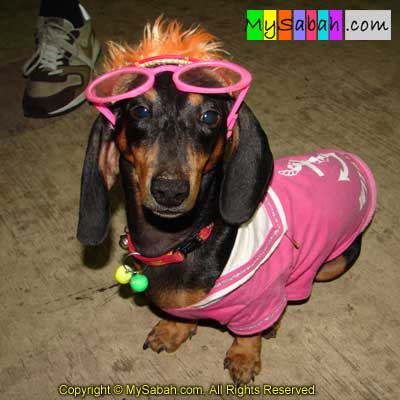 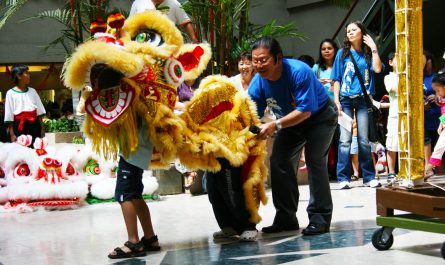 One thought on “Most Popular Dogs of KK City”