Since the great success of 1Borneo launching, every developers seem to start loving the idea of promoting their new shopping centre via grand opening event. This time Asia City Complex even invited the artistes (Wang Shi Xian and Siao Hui) of popular Taiwanese TV series “Spirits of Love” to perform in the opening on May 5. 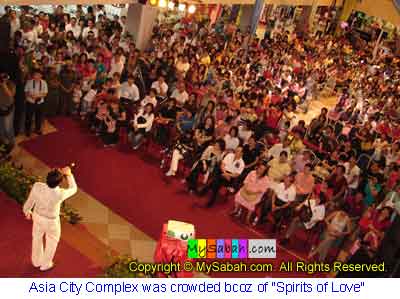 “Spirits of Love” is currently shown on Astro’s AEC (channel no. 19), at 6PM, from Mon to Fri (repeated at 12pm the next day). At first I didn’t watch it coz it speaks in Taiwanese dialect “Min-Nan” (sound almost identical to Hokkien dialect), and it looks like a low cost production film, always the same faces talking and acting in same fixed indoor venues. As my mom is always busy cooking at 6pm, so she asks me to tape record it. In the drama, Wang Shi Xian acts as “Wang Sheng Tian”, one of the main actor, while Siao Hui acted as Li-Zhu’s mother, who loved money and gambling (she is no longer in the show). The storyline is quite interesting. I thought only old aunty uncle watch this series. I knew I was wrong, when I saw hundreds of young fans came and supported them. 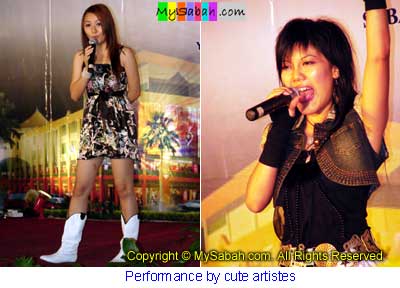 Now 400+ episodes have been broadasted in Malaysia. Basically those actors fight endlessly among themselves, from their generation, until their next generation. My mom has felt tired of it, so she wanted me to ask the actors when is the last episode. And the answer is – Taiwan has shown about 600+ episodes (correct me if I am wrong) and has no sign of stopping. Guess they will fight until their great grandchild generation then, haha… 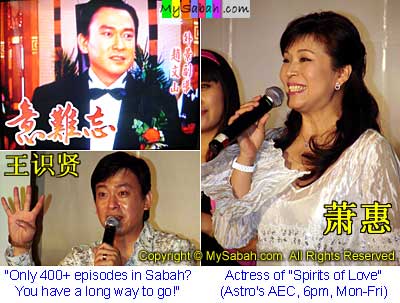 BTW, they also went to see the Miss Sabah 2007 Final later that evening. See if you can spot them in the photos.