Kinabalu Park has one of the richest assemblage of flora in the world, with an estimate of 5,000 to 6,000 vascular plant species that cover the habitat from warm lowland forest up to cold alpine mountain zone inside a park area of 754 KM2. Though Kinabalu Park has become the most popular destination of Sabah, most tourists can’t even name 3 plant after a trip there. A short visit to its Botanical Garden will improve their travel experience considerably when they learn the wonders of our flora kingdom. 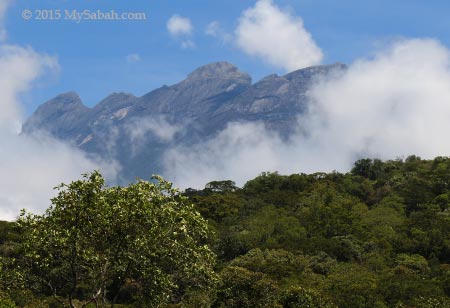 Pic: Kinabalu Park is an UNESCO World Heritage Site because of its mega flora diversity

“The interest, and uniqueness of Kinabalu lies largely with its mountain flora.” -van Steenis, plant geographer 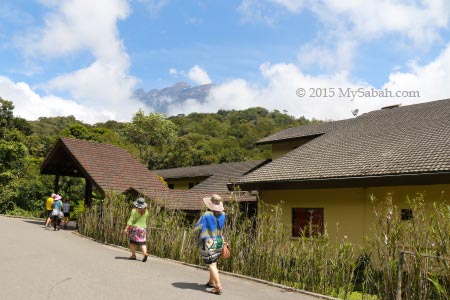 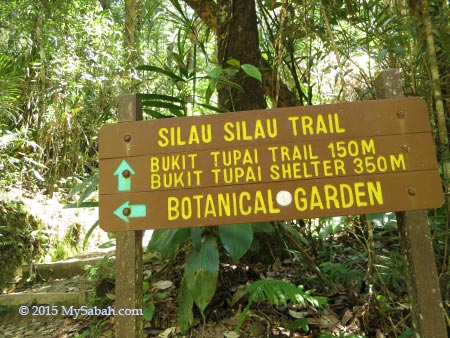 Mt. Kinabalu Botanical Garden (a.k.a. Mountain Garden) is completely concealed by dense trees and pretty much neglected by tourists. The “secret” entrance is located in the wood between Liwagu Restaurant and Kinabalu Hall (Dewan Kinabalu). Just follow a small trail to the forest from road side and look for the direction sign. Some locals may have visited the park a dozen time, but they never discover this garden. Like my father, he was so surprised to see this “hidden garden” and didn’t know it has existed since 1981. 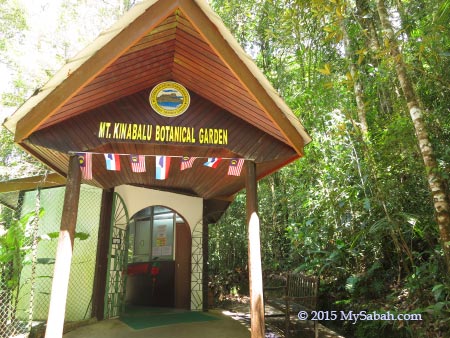 The garden is about 50 Meters away from the sign and you will see the long stairway leading to the entrance and ticket counter. The surrounding here is quiet, in contrast to other park areas full with noisy tourists. I heard many bird’s chirping and squirrels skulking behind the leaves. The air is cooling and refreshing too, as the garden is about 1,520 Meters above sea level, with a mountain stream named Silau-Silau River (the mean temperature of the water is 16°C) running through it.

The garden is only 1.4 hectares in size and there is a 700 Meters garden trail (see map above) with labels, so you can explore the garden on your own (but not so advisable). I strongly recommend you to join the 1-hour guided tour (at 9am, 12pm and 3pm daily) for a very small fee, or you will be disappointed and give it a thumbs down in TripAdvisor. Even botanists have difficulty to identify 25% of the flora in Kinabalu Park, so normal visitors won’t have much fun if they wander on their own. 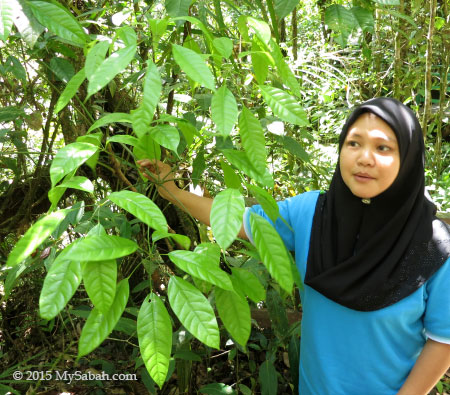 Mt. Kinabalu Botanical Garden is not only about flowers, it also shows the endemic flora, fruits, ornamental plant, trees, local herbs and other special plant from Kinabalu Park. Though most plants are green, they are not made the same. A guide from Interpretative & Education Unit of Kinabalu Park will provide a 1-hour interpretive walking tour in the garden, in English or Malaysia language (depending on the nationality of the audiences). I forgot the name of my guide. Let’s call her Sumandak here. The first interesting plant that Sumandak presented was an Umbrella Tree, which is used by locals for birth control (female). 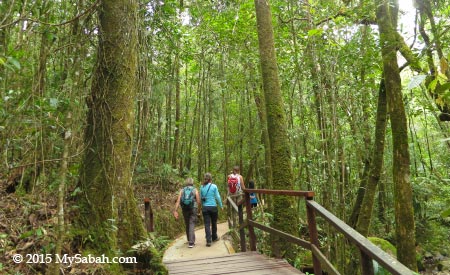 The garden trail is paved by concrete and boardwalk. The place looks more like a natural forest than garden. While listening to the guide, we couldn’t help to turn our heads around to appreciate the beautiful lush environment of lower montane forest. 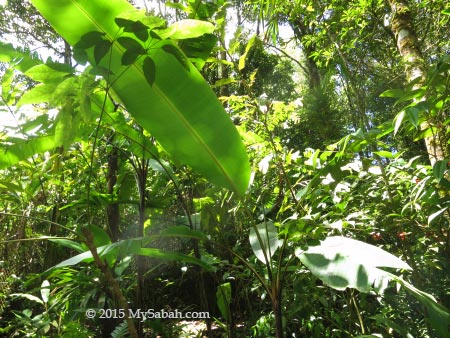 There are five wild banana species in Kinabalu Park. Their fruits are edible but contain plenty of oversized seeds, unlike the seedless banana that we buy from supermarket. 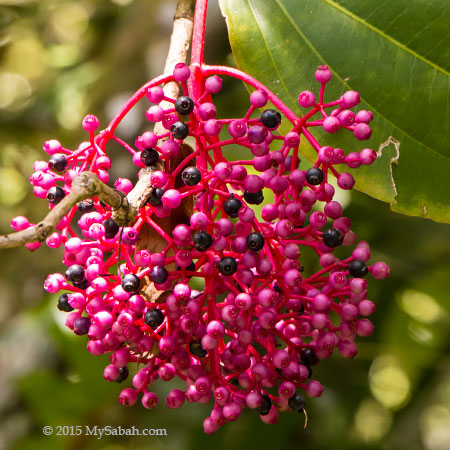 Nicknamed as Showy Asian Grapes, Medinilla Speciosa fruits all year round and its ripe berry (in dark purple) is an important food for birds and wildlife. The fruit is edible with sweet taste and might protect you from eye diseases. Medinilla is also a popular landscaping plant in highland. 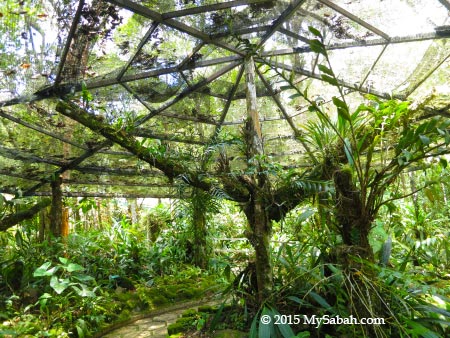 It’s an enjoyable experience to hear Sumandak to explain the features of interesting plants. Everything said is in plain English, she didn’t use much scientific names and jargons that only botanists could comprehend (unless you request). You can ask questions too. Many plants are not pretty but very useful. Without an introduction from the guide, you won’t know the awesome things it does. It’s like knowing a new friend who looks low-key from outside but has charming personality. 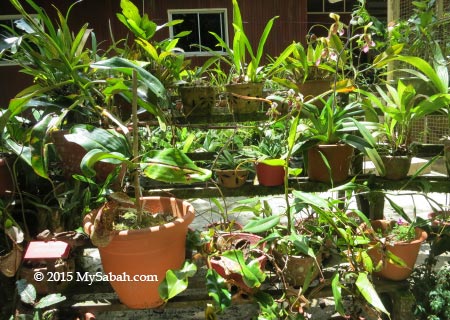 Then we came to the nursery area of the rarest orchids and pitcher plants of Kinabalu Park. To prevent people to pluck them, the nursery is fenced, but you still can have a good look of them through the wire mesh. These fully protected species are highly sought-after items in black market. 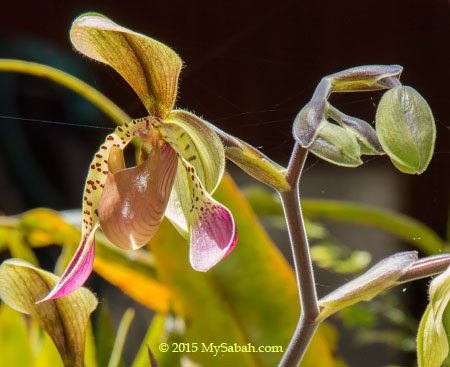 Sabah is well-known among orchid mania, because more than 1,200 orchid species are found in Kinabalu Park. In general, the blooming months for most orchids are between Sep and Dec. However, whatever day you visit, you won’t see them all blooms at the same time. 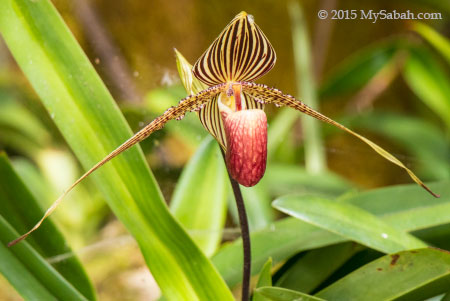 Pic: Rotchcild’s Slipper Orchid (Paphiopedilum rothschildianum) is the State Flower of Sabah and has many names such as “Aristocrat of all slipper orchids”, Gold of Kinabalu and Sumazau Orchid. It’s endemic to Sabah and a highly endangered species. You have better chance to see it flowering if you visit in Oct or Nov. 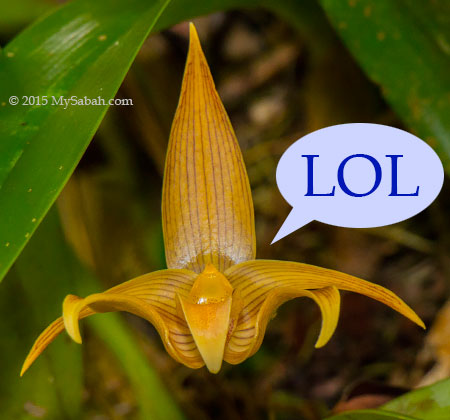 When gently shaken by breeze, the moving lip of Laughing Orchid appears like a naughty boy sticking out his tongue repeatedly. Actually the “tongue” is called labellum, which serves as a landing platform for visiting insects (pollinator). The blooming months of Laughing Orchid are Jan, May and Jun. 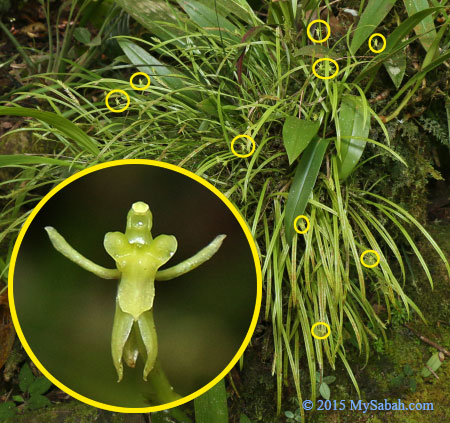 Pic: The Sexy Lady Orchid or Dancing Lady Orchid (Stikorchis species). I guess you can see how it gets this name lol. 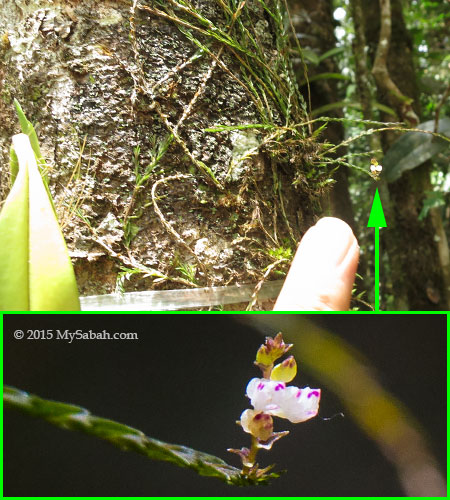 One of the highlight of this tour is sighting of Pinhead Orchid (Podochilus tenuis), the smallest orchid in Borneo (some says it can be the smallest in the world). Its tiny flower is about 2 MM across (note my finger next to it). The funny thing is – it grows on a tree near the entrance but none of us notices it. See, that’s why you need a guide or you will miss many things. 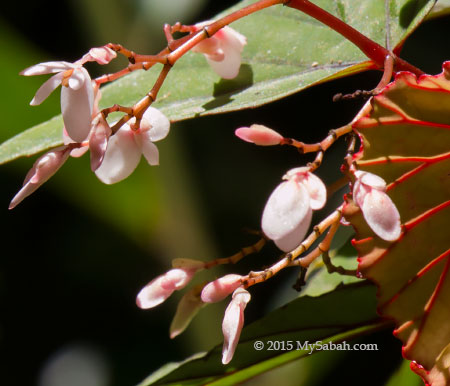 Pic: Begonia has the most variable form of leaves in plant kingdom. Researchers estimate that there should be at least 600 species of Begonia in Borneo but only 194 are scientifically described at present. 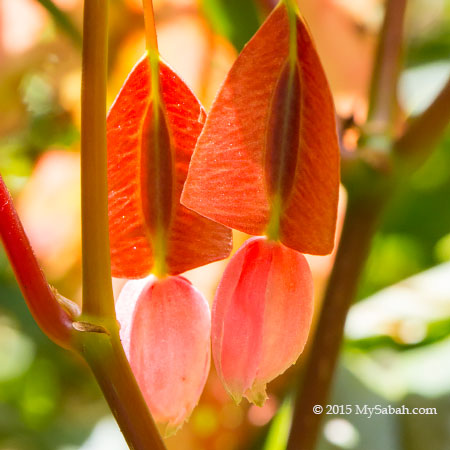 Sumandak also showed us some Begonia flowers. There have been many publications about Begonia in recent years because over 50% of Sabah Begonia are unnamed and all Bornean species are endemic. It is an exciting botany territory filled with new discovery and surprise. 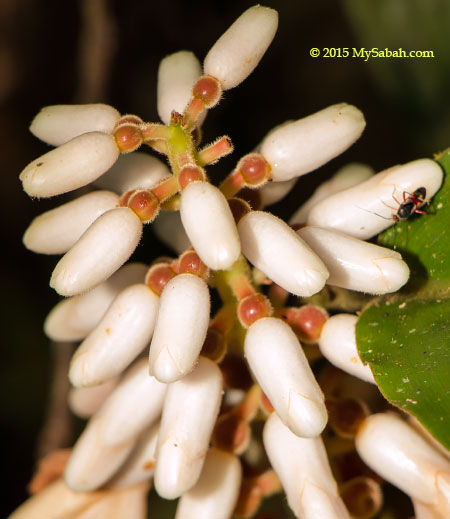 Who would relate colorful flower with pungent ginger? I’ve been hiking in many forest of Sabah and always impressed by variety of colors and shapes of ginger flowers in the wild. Without ginger flowers, the view of rainforest will be less spiced up. 30 species of non-edible ginger are planted in Mountain Garden. 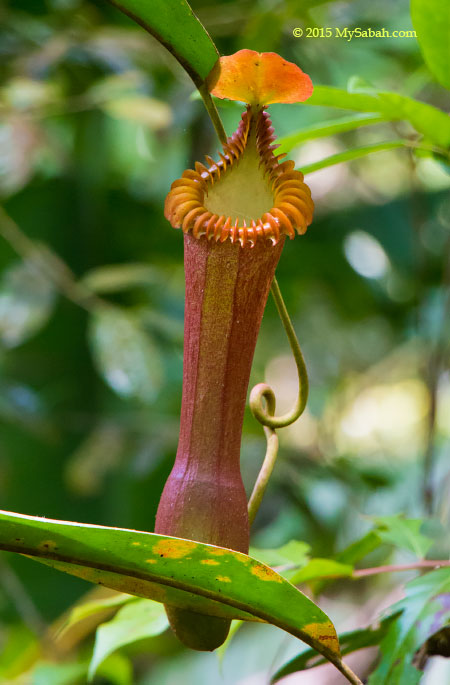 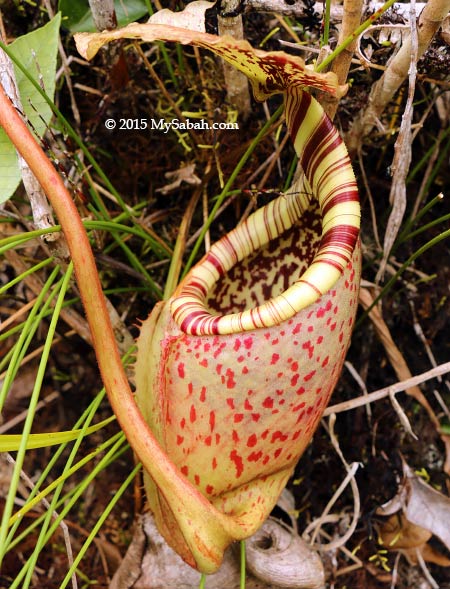 Pitcher plant (or Monkey Cup) is a peculiar carnivorous plant which traps insects as food. Its genus name, Nepenthes is a Greek word meaning “removing all sorrow” (Go figure). The Mountain Garden has 5 species of them (all endemic to Sabah), including the most magnificent Nepenthes edwardsiana that has the most developed ribs on its peristome (rim), and Nepenthes rajah, the largest pitcher plant in the world (can hold up to 3.5 litres of water. Sometimes rat, lizard or frog is found drowned inside). 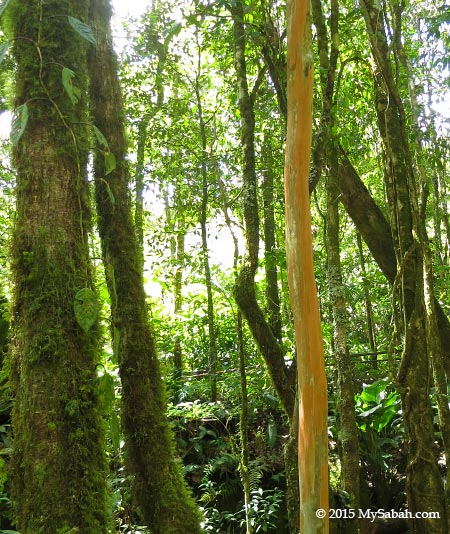 The exposed smooth orange-brown trunk of “naked tree” (Species: Tristaniopsis bilocularis) will catch your attention. It is endemic to Kinabalu Park and its bark peels in scrolls constantly. Villagers use its bark as mosquito repellent. 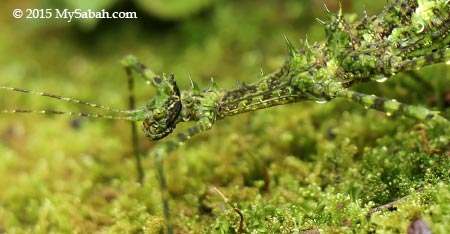 Then Sumandak spotted something moving on the floor. It’s a well-camouflaged stick insect that blends perfectly into mosses. It was busy pressing its tail to the ground to lay eggs. Nobody would see it if it stayed motionless. You may see it in action in following video: 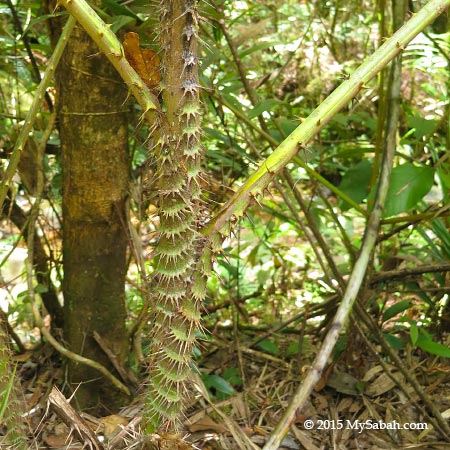 The largest of the mountain rattan is Plectocomia elongata (see photo above). Its thorns look so nasty that I want to stay 10 feet away from it. This rattan only flowers once in its life and it’s one of the 40 rattan species live in Kinabalu Park. Malaysian parents like to whip naughty kids with rattan, luckily they don’t use the species that has thorns. 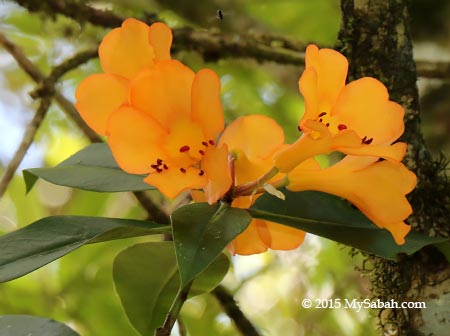 Rhododendron is also called wild rose. There are 24 species of Rhododendron in Kinabalu Park (5 are endemic to Borneo). Observant climbers of Mt. Kinabalu would see at least 6 species along the trail to the summit, if they are keen to stop and smell the roses. 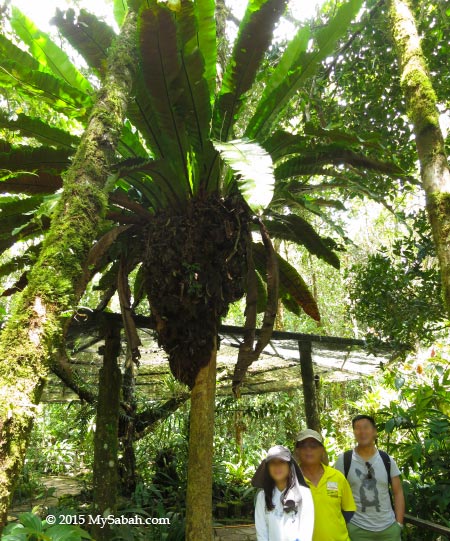 608 species of fern are found in Kinabalu Park. Most ferns at or above the altitude of this garden are not found in other parts of Malaysia.

Near to Mountain Garden, there is another nature tour starts at 11am daily. A guide will take you for a 1-hour walk in Silau-Silau Trail nearby, a great bird-watching area. If you are interested, you may purchase ticket and wait at Kinabalu Hall before 11am. The fee is RM3 (≈US$0.90) for Non-Malaysian and RM2 for Malaysian (50% discount for visitor below 18 years old).

There is a Video Show at the theater in ground floor of Liwagu Restaurant at 2pm every day (and 7:30pm on Fri-Mon & Public Holiday). Ticket fee is RM2 (≈US$0.60) for Non-Malaysian and RM1 for Malaysian.