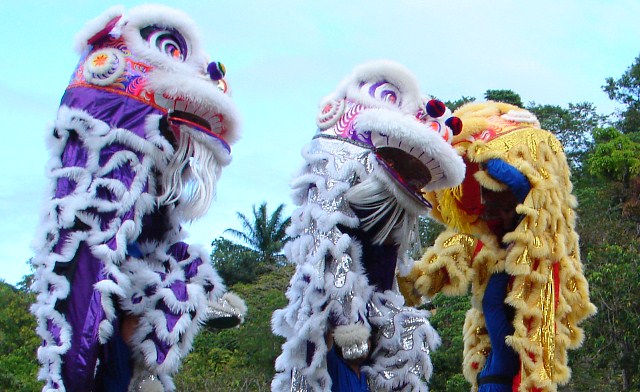 You may not love Chinese food, but it’s hard not to be mesmerized by the lion dance of Chinese culture. Not only lion is a symbol of strength and prosperity, wherever it goes, it brings joy and happiness, especially to kids. If you are a big fan of lion dance, you must not miss the Lion, Dragon and Unicorn Dance Festival which is held annually in Padang Merdeka (Merdeka Field) of Kota Kinabalu before Chinese New Year. I have some videos for this fest last Saturday. 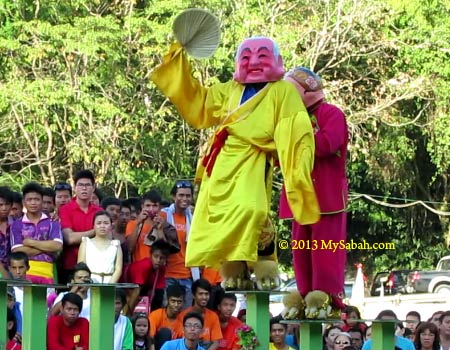 In lion dances, Big Head Buddha wields his palm fan to tease or to tame the lion. His presence is to do some funny acts to liven the show. 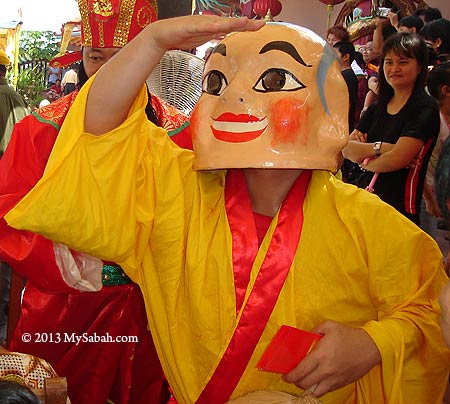 There is no other festival where lion dance fans can watch lion dance FREE from 3pm to 8pm. The field was crowded and everyone wanted to see lion up close, so it was a bit out of control. Lion dance is so well-received that many lion dancers in Sabah are non-Chinese. 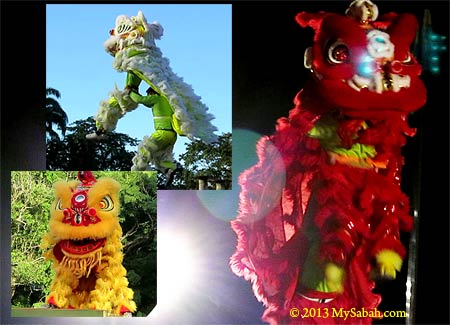 The appearance of lion has “evolved” over the years. Nowadays, lion is more colorful, fluffy and kawaii (cute). In old day, a dancing pink lion would cause heart attack to the traditional old dudes like Huang Fei Hong (黃飛鴻).

Whatever color it is, high pole lion dance is definitely no playing matter. It is a dangerous stunt and falling is not uncommon, like what I captured in video above. A good lion dance team can bring life to their lion, turning it into an intelligent animal full of expression.

Actually my favorite is Unicorn, which I personally call “lion on ecstasy” because of its vigorous head shaking movement, hehe.. Unicorn is a gentle and sacred animal that looks like a mix of deer and horse with colorful fur. 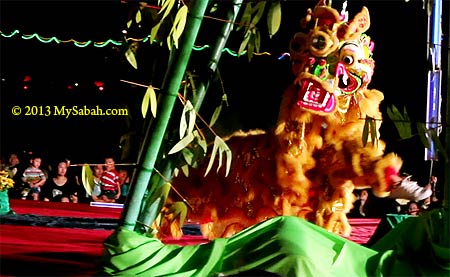 With funny protruding eyes and swift movement, unicorn always looks excited and highly curious, and its behavior is also very puppy-like. During the dance, it will do a lot of scratching, sniffing and exploring. Finally, it would find gold or treasure as a happy ending.

Most lions we see in Malaysia are Southern Lions, mainly originated from Guangdong of China. Beijing Lion is from the north.

Usually Beijing lion dances in pair. The one with red ribbon on head is male, green is female.

The Wushu performance from Tien Nam Shi Buddhist Temple (镇南寺) of Kinarut is interesting too. 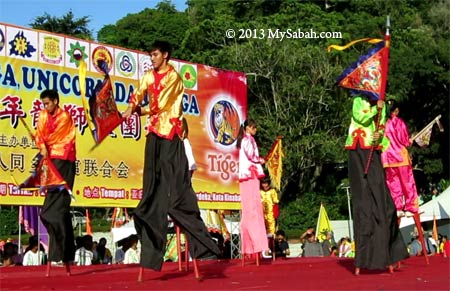 Techno 3 Princes (电音三太子) was one of the highlight. They were dancing in Gangnam style. I uploaded the video but YouTube kept on warning me about the music copyright, so I had to remove it. 🙁 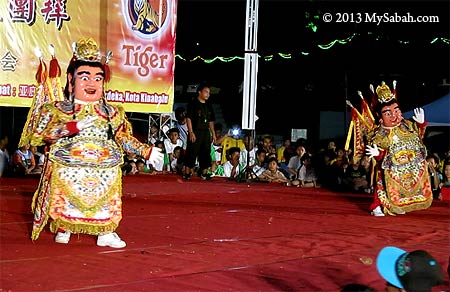 The highlight is the Fluorescent (or UV) Dragon Dance. The dragon danced in darkness and its body is illuminated by UV light. The effect is really cool, with a touch of mystery. 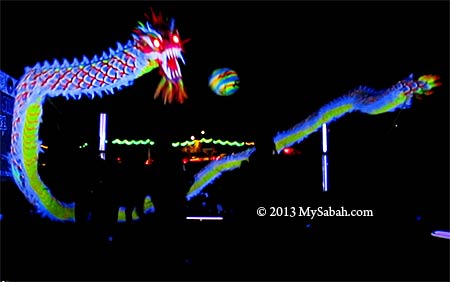 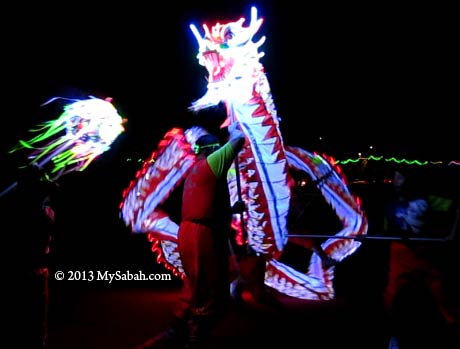 The LED dragon dance by lady team (except the dragon head) also won a lot of applause from audiences. 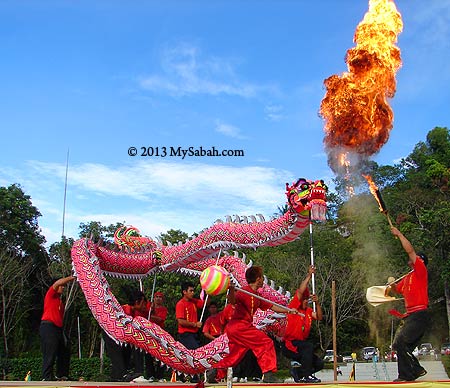 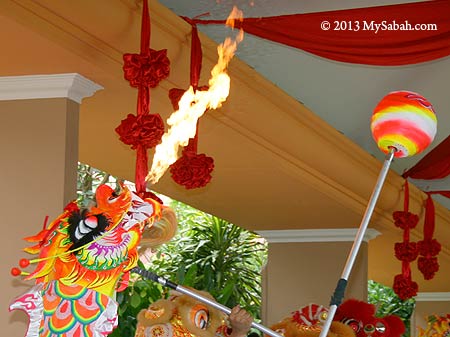 I would like to see fire dragon, but it didn’t show up this year. 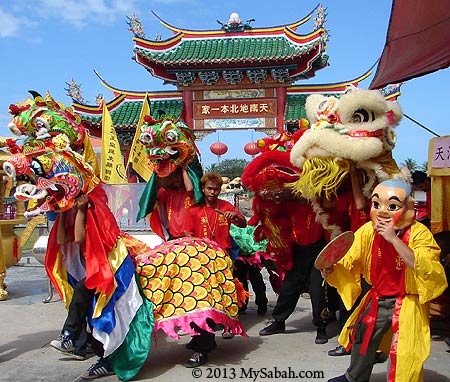 Hope you like the videos. Happy Chinese New Year to you!!! 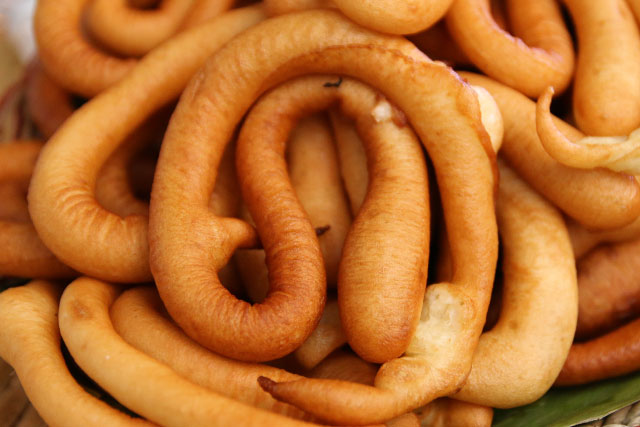 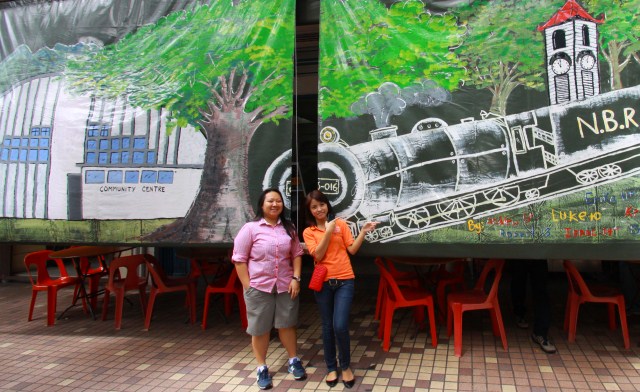 Bonding with Gaya Street, the heritage street of Sabah