Half of the popular attractions of Malaysia are sea and islands. Besides the tropical weather, white sandy beaches and crystal clear seawater, the islands of Sabah are rich in marine biodiversity. The sea of Semporna lies inside the Coral Triangle, “The Amazon of the Seas” that covers six countries, and Malaysia (North and East of Sabah) is one of them.

With an area equal in size to half of the United States, Coral Triangle is home to 75% of coral species, more than half of the world’s reefs, 3,000 species of reef fish, and seven species of marine turtle. In year 2014 there were about 65,139 tourists came to dive in Sabah. You can bet most of them dive in one of the recommended islands below:

Pom Pom is 45 minutes by boat from Semporna. This island has almost everything what a tourist expects for a dream holiday on island. The chalets are built with traditional local methods which make them blend nicely with the ambiance of the island. 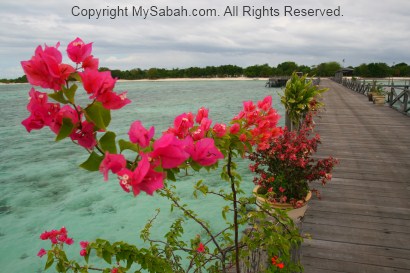 What I really like about Pom-Pom is its environmental-friendly approaches to operate the resort. For example, they have a turtle hatchery to protect the turtle eggs, a reverse osmosis re-cycling rainwater system to cut down pollution from importing of water, and the waste water and residual waste is re-cycled and used for irrigation and fertilization for their gardens. 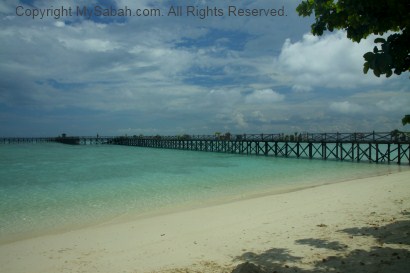 As tourists are getting more conservation-conscious, green resort like Pom Pom should Resort should be a role model for other island resorts to follow. 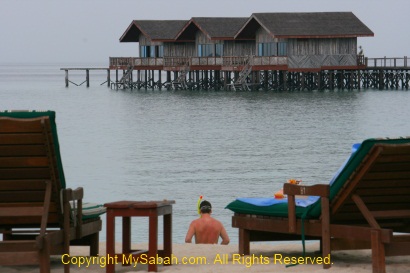 Mataking is well-known as a romance island, even for newlyweds from Italy. In fact Mataking is a 2-in-1 island, with 20 acres of land divided between two islands, namely Mataking Kecil and Mataking Besar. During low tide, you can walk to other island on long stretch of sandy beach that connects two islands. 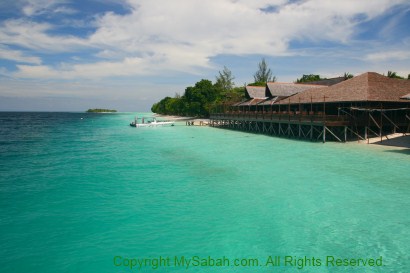 For divers, you can post a letter in “Underwater Post Office”, the first of its kind in Malaysia. The mailbox is on Mataking 1, an old 40-foot wooden cargo ship sank by Mataking in March 2006, to create an artificial reef. 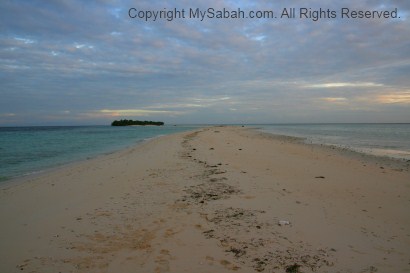 For non-divers, you may laze on the beach or try activities such as Jamu Spa, batik painting and kayaking. You also can join night trekking to see fireflies, turtles and the rare coconut crab. 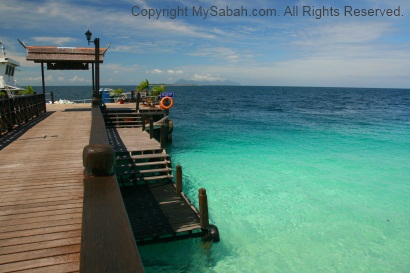 Kapalai is a magic island, as the island will “disappear” during high tide. Kapalai was once a beautiful island 200 years ago, but due to land erosion, now what remains is a narrow sandy bar only visible during low tide. This makes its wooden accommodation looks like a floating resort. 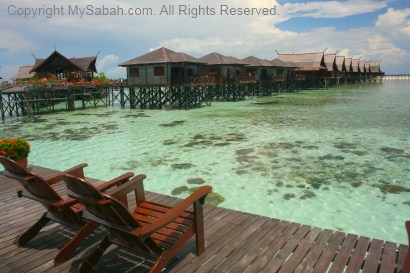 The chalets are built on high wooden stilts on the sand and connected by boardwalk. At night you can see marine lives such as lionfish, sting ray and even turtle swim under the walkways. There is an opening on the deck of the restaurant. You can see schools of fish passing under the viewing hole. 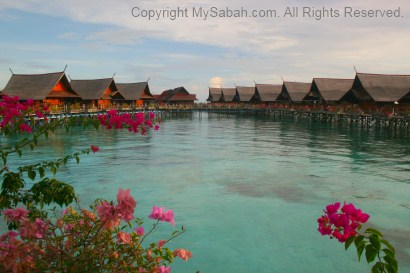 On Kapalai, you feel like you are living in the middle of the ocean, not just an island. 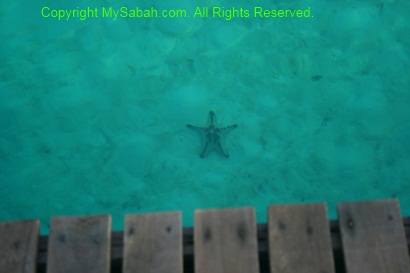 Mabul is one of the best muck-diving sites in the world. When I saw Mabul, I was amazed by abundant of corals growing so near to the shore. This is quite impossible when the island has over 2,000 of residents. Thanks to the tour operators who engage the local community on conservation, the marine ecology of this island is recovering from its history of fish bombing. 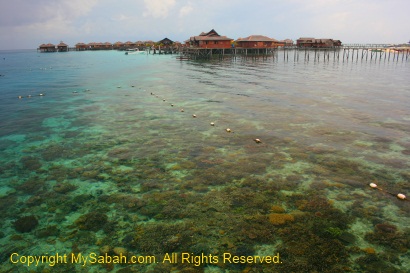 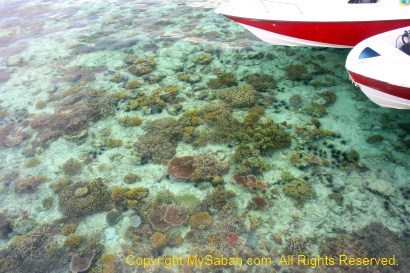 Just drop off from the end of the jetty for a dive or snorkeling, you would see variety of macro life such as flamboyant cuttlefish, blue-ringed octopus, spike-fin gobies and frogfish. Mabul is near to Sipadan, an ideal stop-over for divers who want to dive in Sipadan. The resorts and dive operators on Mabul have been trying to involve the locals in beach and underwater clean-ups, coral transplanting and environmental education. One of them even pays the villagers to collect the garbage, which otherwise would end up in the sea. For some guest houses, I hope they could be more eco-friendly, for example, I don’t feel comfortable to see my bath water goes directly into the sea. 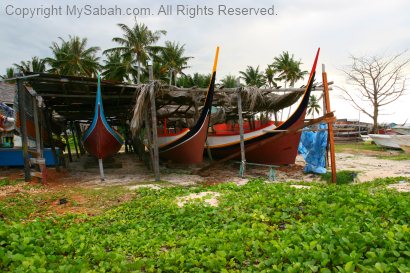 As one of the top 10 dive sites in the world, Sipadan doesn’t need more introduction. Sipadan is the only oceanic island of Malaysia. This mushroom-shape island was formed by living corals growing on top of an extinct undersea volcano, which rises 600 Meters from the ocean floor. 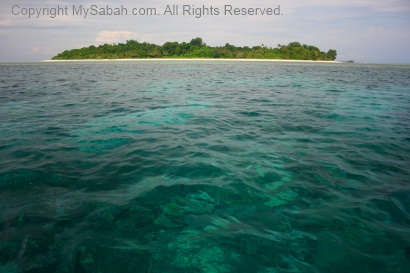 There a total of 12 dive sites in Sipadan, and the most recommended dive sites are the Barracuda Point, South Point, Hanging Garden and Turtle Cavern. Most divers can spot many green and hawksbill turtles, sharks and school of large fishes in a single dive. 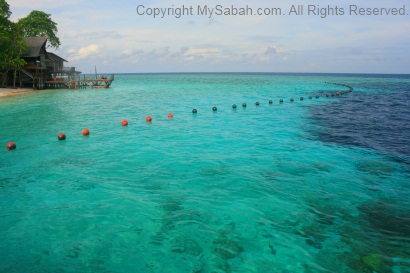 However, please save Sipadan (best) for the last. I feel uneasy when divers, who just earn their cert, say, “Now I want to go to Sipadan!” The water current in Sipadan is a bit strong. We don’t want those clumsy new divers, who cannot control their buoyancy totally, kick and crush the fragile corals by accident. And please stop chasing and touching the sea turtles! 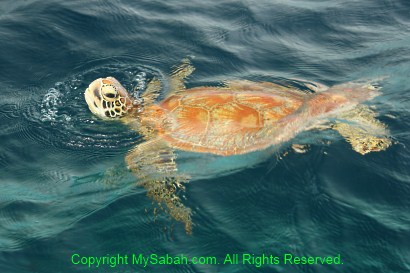 That’s a right decision that the government asked all the dive resorts moved out of Sipadan in year 2004, to preserve the island’s pristine state. The number of divers allowed to dive in Sipadan is also limited to 120 persons a day. Although the tourism ministry is constantly pressured by the tour operators to increase the daily quota, I am glad that government’s determination to protect the marine ecosystem doesn’t change.

In photo exhibition of Sabah, if you see those beautiful photos of primitive stilt houses over turquoise sea water, usually with a kid paddling a boat in foreground, very likely they are taken in the islands of Tun Sakaran Marine Park (TSMP). 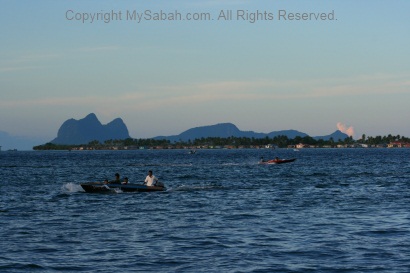 Also known as the Semporna Islands Park, TSMP consists of eight islands (i.e. Bohey Dulang, Bodgaya, Sebangkat, Selakan, Mantabuan, Sibuan, Maiga, Church Reef and Kapikan Reef) and is the largest marine park of Sabah. With a size of 350 sq KM, it also has the largest concentration of coral reefs in Malaysia. 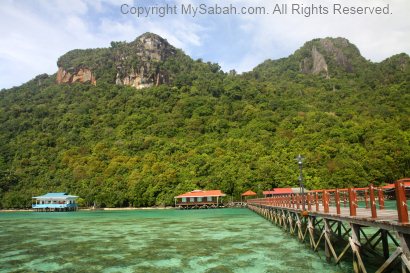 Even though this park is not as popular as Sipadan, TSMP has more biodiversity in terms of species and habitats. Total species recorded in TSMP includes 544 species of coral reef fish, 255 species of hard coral, 70 species soft coral, 140 species sponge, 265 species mollusc and 109 species echinoderms. I think it is better to keep the Park as pristine as it is, rather than promoting it as a dive paradise. 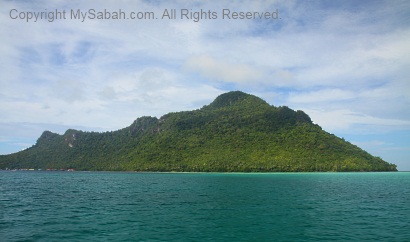 How to get there?

Semporna is a small town and doesn’t have any airport. To go there, you need to take a flight (by Malaysia Airlines or AirAsia) from Kota Kinabalu City, capital of Sabah, (or from Kuala Lumpur of Peninsular Malaysia) to fly to Tawau airport. You can hire a taxi from Tawau Airport to go to Semporna, which takes about an hour. It costs about RM200-RM250 (≈US$50-US$62) per taxi, which is a standard sedan that can take 4 passengers (but may end up only can take 1 or 2 people, if you have diving equipment and lot of big luggages). Taxi is always available in Tawau Airport, because the taxi drivers keep track of the arrival of flights. 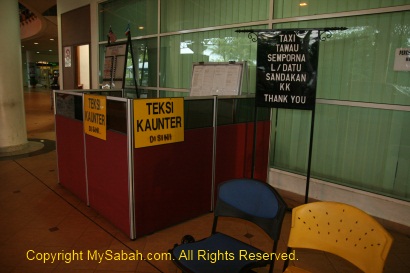 The best arrangement is to book the accommodation or tour in advance, and request the resort / dive operator to fetch you at Tawau Airport. They would charge a fee of RM50-RM60 per head (≈US$12.50-US$15) and normally pick you up by van (more space).

Do not go to Tawau city and take a taxi to Semporna from there, it’s a waste of traveling time (take nearly 2 hours).

Jackie, orangutan who owns a house

4 thoughts on “Islands of Semporna”