Whenever I was on a plane, I would always try to get a few aerial shots (and end with disappointing result). Finally I had the chance to try aerial photography from a helicopter with a few photographers, about a thousand feet above the ground. Though the joyride was short, it was an exciting experience.

We gathered at the Sabah Air helicopter terminal about 7:30am at Tanjung Aru. The weather was good and the sky was clear. After weighting our bodies and photography equipments, we were presented a 10-minute video about safety briefing and onboard procedures. We met the pilot, then we started flying at 8:09am.

The helicopter flied at very high speed (higher force of gravity). My ears felt the air pressure and I got a bit of motion sickness. But very soon my body was adapted to the change. The window at the side was open, so I could hold the camera a bit outside the window to take the aerial photos. It was hard… The wind was so strong that my len was like being pressed by strong hand, and had difficulty to auto-focus. If I am not mistaken, the speed was 90 Mile/Hour (Note: not KM/Hour).

The flight was only 15 minutes, we started from Tanjung Aru, then passing by STAR Hotel, Sutera Harbour, Tunku Abdul Rahman Islands,
Kota Kinabalu city, Likas Mosque, Yayasan Sabah, Penampang, etc. High in the sky, everything was so small on the ground.. the buildings looked like toy houses, traffic looked like running ants.. KK city is so beautiful.. 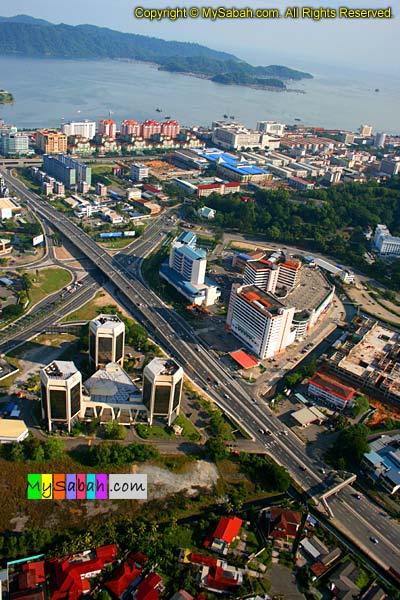 We were so busy shooting photos. We only had a few seconds to shoot decision. Due to the vibration of the helipcopter, I use Shutter Priority and take the pictures in JPG+RAW format. Every scene passed so fast, we really had no time to adjust camera setting and preview the photos on LCD. The flight ended at 8:25am. “AH! Return to base so soon?!” We all wished it could be longer. I like the photo below coz it looks like a typical scene from 007 movie (James being attacked by enemy from helicopter). 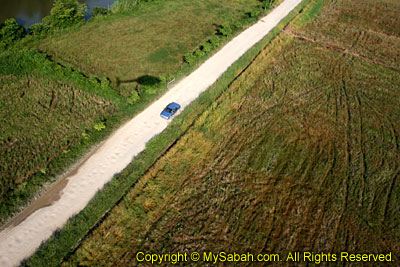 Now I can call myself an “Aerial Photographer.” Since Sheikh Muszaphar also can call himself an “Angkasawan,” I don’t see any problem here. Below are more photos. Click each of them to see bigger photo. Some places I have no idea where they are (the photos between Likas Mosque and STAR Hotel). Probably someone could tell me.