Don’t be so happy yet. Due to overfishing, the two largest species, Tridacna gigas and Tridacna derasa, are now considered critically endangered in Sabah (some say they are locally extinct). All species of giant clams are listed in “Convention on International Trade in Endangered Species of Wild Fauna and Flora” (CITES), which means they are endangered and should be protected. 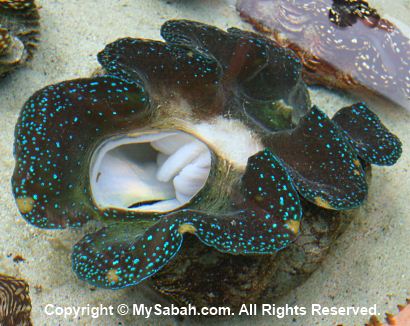 Above: Tridacna gigas, the largest species of giant clam, can reach 2 M in length, weigh over 200 KG, and live to more than 100 years old! But sorry, locally extinct already. 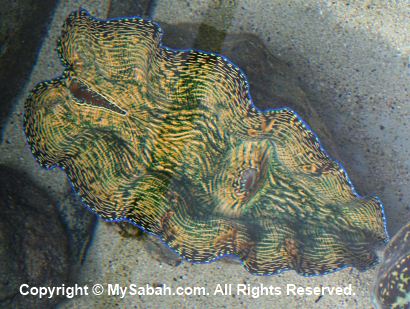 Above: Tridacna derasa, also a locally extinct species. Very rare in the wild. 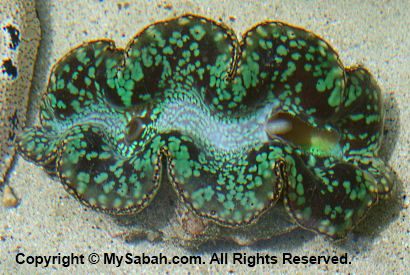 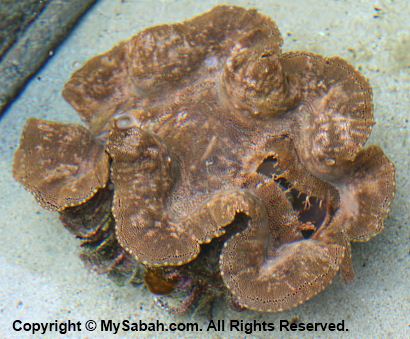 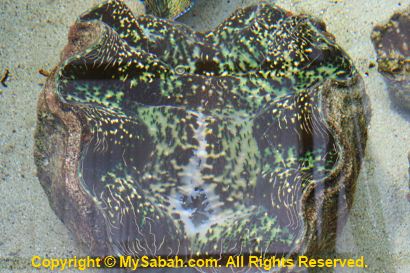 Giant clams live like a plant, as their main diet is organic nutrients which come from the photosynthesis of millions of symbiotic algae (zooxanthellae) that live inside their mantle. In return, giant clams offer the algae a safe home.

Harvesting, trading and buying of giant clams are prohibited under the Malaysian Law. However, enforcement is different story. Just went to tamu (native market) in Kota Belud and see it yourselves. The hawkers sell and slaughter the giant clams openly. They don’t feel anything wrong about it, and didn’t even bother when I was photographing them. 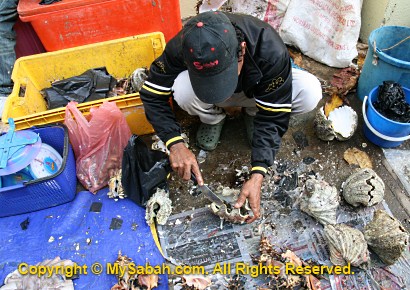 Above: see the yellow and red boxes and two big white sacks behind the seller? They are all giant claim shells! There were many happy buyers and many giant clams were sold in just a few minutes. 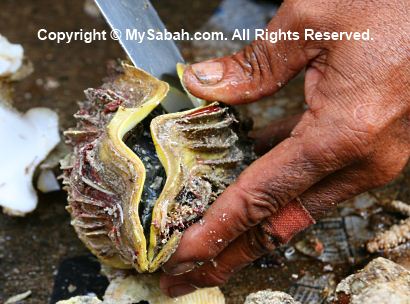 Poor giant clams. They may have taken more than 3 years to grow to these sizes. They are eaten before they are mature enough to breed. 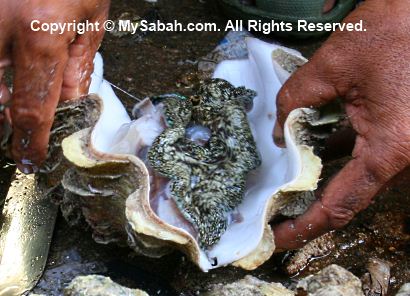 Giant clams live in shallow lagoons, reef flats, and the sandy and rubbly substrate of coral reefs in the tropical Indo West Pacific. 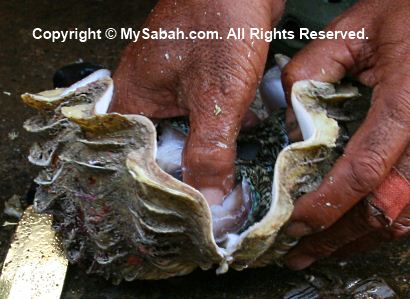 Giant clams were once everywhere. Now they are getting rare because human eats their meat. Humans are the worst predators of giant clams. 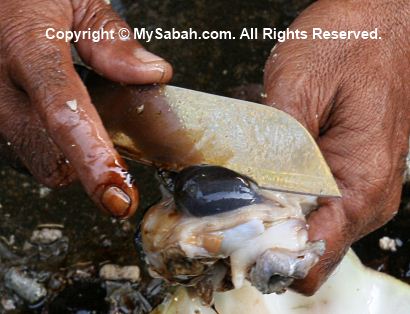 Giant clams do not get enough attention like sharks and turtles, though they are one of the most fascinating marine creatures. 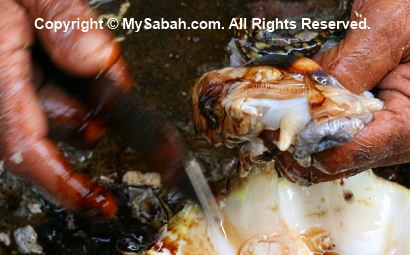 Giant clams also uses a siphon to draw in water to filter and consume plankton. By absorbing and filtering nitrates, ammonia and other organics that are harmful to coral reefs, giant clams help to clean the water in marine ecosystems. 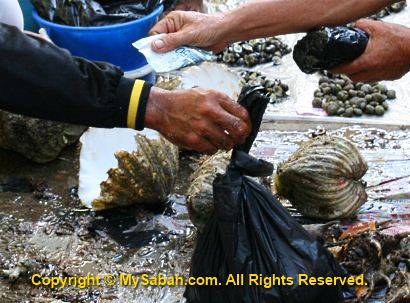 These giant clams were slaughtered for their meat and sold for RM5 (small) or RM8 (big) each. 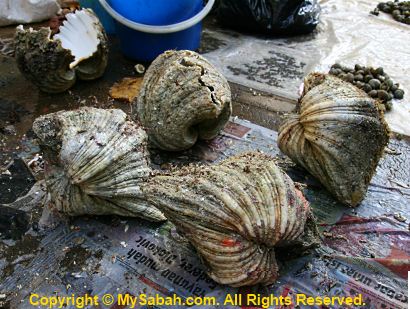 Above: giant clams waited to be slaughtered alive. Business was good and they were unlikely to survive until sunset.

I also went to Gaya Street Sunday Market on the same day. More than 100 giant clam shells were sold as handicraft items such as soap dishes, ash trays, shell lamps and ornaments. 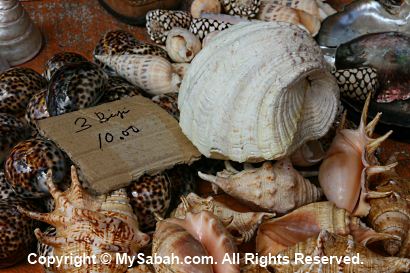 There were tourists buying giant clams. Under the regulations of CITES, giant clams, whether dead or alive, cannot be carried out of our country. I don’t blame the tourists don’t know they are sponsoring an illegal trade. But what the heck is happening to our authorities (Fishery and Wildlife Departments)? Are they blind? 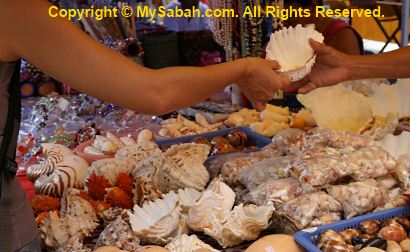 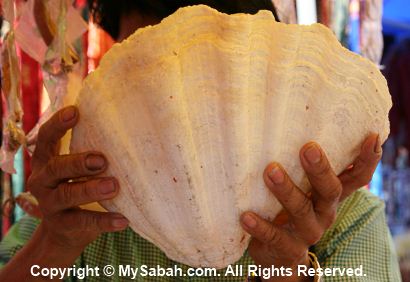 More photos of giant clams sales in Gaya Street… It seems like giant clam trade has become an “industry”. It is very hard to find the whole complete set of giant clam shells on the beach, so very likely these shells were taken from live giant clams. 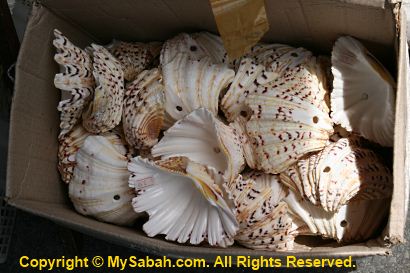 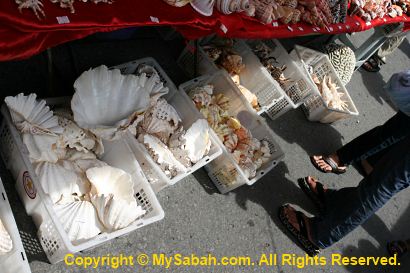 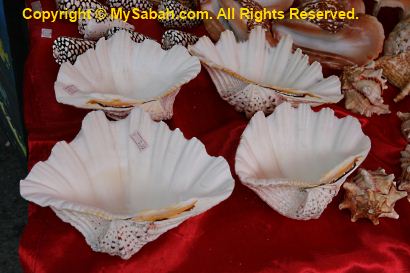 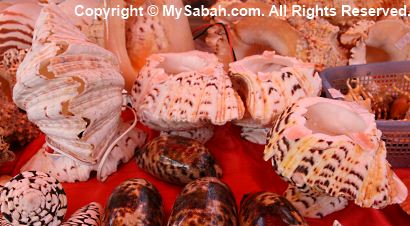 So you think that the problem is not serious enough? Just take a walk in dried seafood market nearby. You will see giant clams (as dried seafood) everywhere. 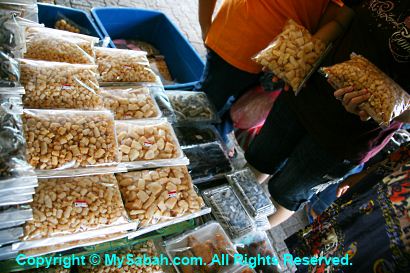 The most valuable part of giant clam is its adductor muscle, which is commonly sold as scallops, which cost over RM100 for a small pack in dried seafood markets. 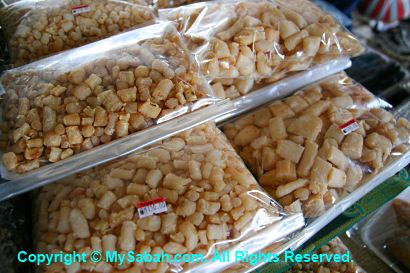 Overfishing of giant clams is a serious problem, as they are considered as a delicacy and profitable seafood. Besides overharvesting, climate change and pollution are also factors that speed up the extinction of giant clams. Excessive CO2 from atmosphere makes the sea water more acidic and lessens the ability of giant clams to grow their shells. The rise in sea temperature will also disturb the symbiotic relationship between the clams and the zooxanthellae that nourishes them. The introduction of a coal power plant in Darvel Bay, which is located inside the Coral Triangle, would pose a threat to giant clams.

More giant clam handicraft items sold in handicraft market… My heart is broken.. FYI, giant clam in movies is always portrayed as a man-eater because it snaps swimmers’ legs by surprise and drowns them. Actually this is impossible. First, you have to find a really huge giant clam, which is extremely rare. Second, giant clams close very slowly and most do not close completely. They do not snap. They are not monsters ok. 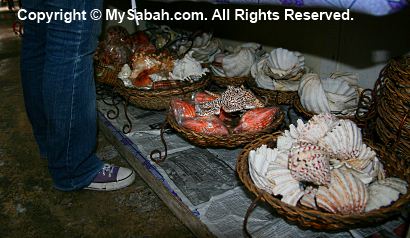 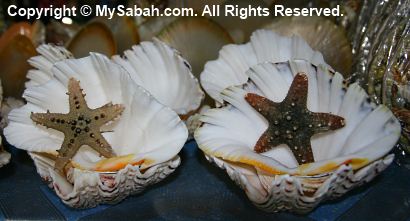 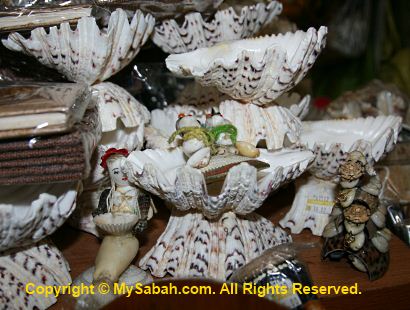 Currently Sabah has two places that spawn and propagate giant clams and you can see all 7 species of giant clams in their sites. The first one is Marine & Ecology Research Centre (MERC) in Gayana Eco Resort of Gaya Island, and another one is Sabah Parks Hatchery at Bohey Dulang Island (see photo below) in Tun Sakaran Marine Park off Semporna. This hatchery was built in year 2004 and fully operational with a completed laboratory in 2009. 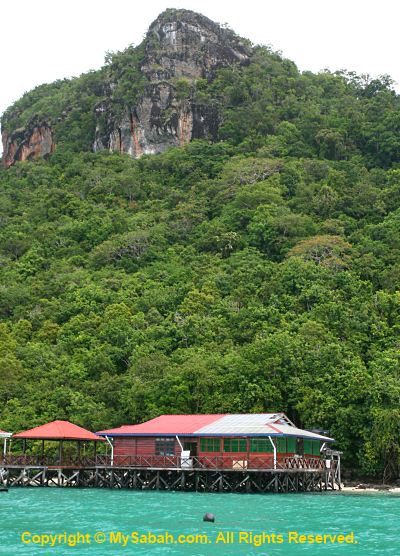 To start, the giant clams will be induced (by temperature or injection of chemical) to release their eggs and sperms for fertilisation. The eggs will be collected. A week later, the larva of giant clams will settle and find a spot to grow, then they are moved to settlement tanks. 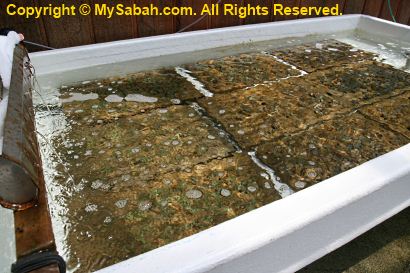 The giant clam larva will spend half a year to grow up to 3 cm. Then they will be released to the sea inside a cage (to protect them from predators), until they grow to 9cm or more after a few months. At last, they will be released independently to the ocean bottom without a cage. Less than 10% of the eggs will survive at the end. 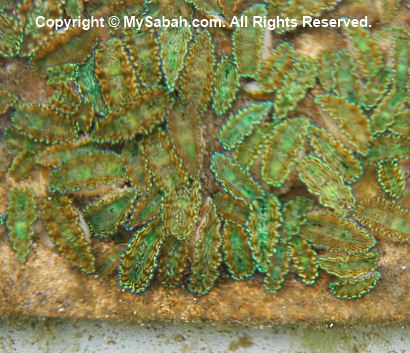 T. gigas and T. derasa have the fastest growth rate. They may reach up to 9-12cm after a year. The suitable release spot will be clean and well-illuminated sea about 10 feet in depth or less with mild water current. Giant clams reach maturity very late, at about 7 to 8 years old. 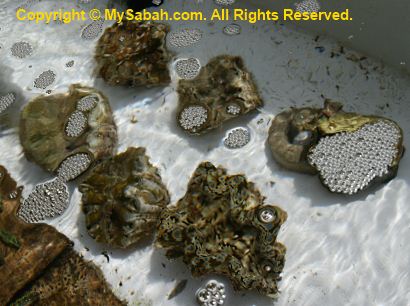 Bohey Dulang Hatchery Station has a mini exhibition hall and a settlement tank area, which are open for public to visit. You can see at least 5 species of big giant clams in their display tank, great for an education tour. To visit the islands of Tun Sakaran Marine Park, you need to get a permit from Sabah Parks first. 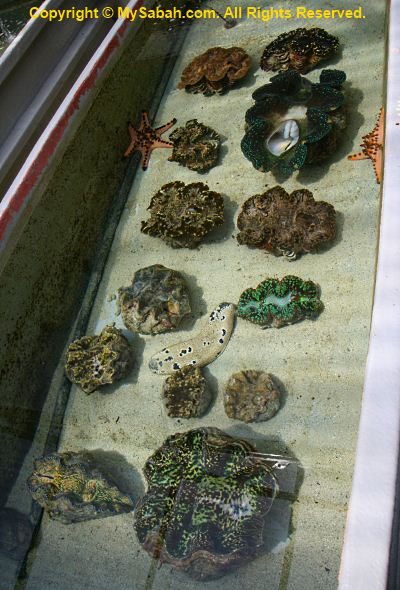 However, no matter how hard and how long these two centres try, they are only able to increase the population of giant clams in limited scale, not the whole ocean around Sabah. The conservation has to be started from you, the consumers. Just don’t eat and buy any giant clam product and the killing will stop. Eating giant clams is as bad as eating shark fin and turtle eggs. The key obstacle of all conservation efforts in Malaysia is the mentality of “if I don’t kill them, others will”, a selfish excuse for greedy mouth of Malaysians. Well, that’s why our country is so dirty, as everyone thinks, “if I don’t throw rubbish, others will.” Anyway, if I can make only one of you to stop consuming giant clam, this blog already worths my time and efforts.

How to Climb Mount Kinabalu and How Much it Cost?

6 thoughts on “Giant Clams of Sabah”