It was my good and bad day. I had to photograph the event for my company even though I got flu. We don’t have F1 in Sabah but we have our second F2 powerboat race at Waterfront of Sabah. The best thing was we didn’t need to buy any ticket to see the world cup. The day was so hot that I almost got stroke and forgot my name. 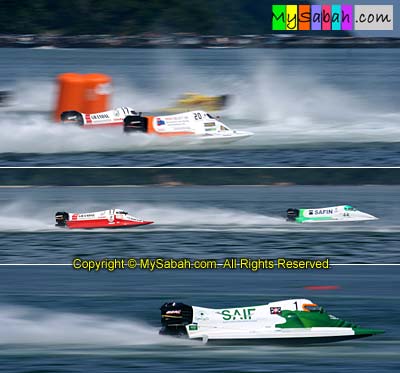 Anyway, I still enjoyed the show. It took only about 30 minutes for the powerboats completed 35 laps on the sea. There were more than 10 powerboats competing and below are some photos of them.

Colin Jelf from Great Britain won his 3rd world champion. You may google the net for result and more news.

There was a prize presentation and farewell dinner in Le-Meridien Hotel later that day. I have included them in the photo album. I lost my tripod in the hotel coz I left it in the ballroom after the event. I checked with the hotel next day but it could not be found anymore. So unhappy though it is only a cheap tripod. I suspect it was stolen by the someone there, but I don’t have the proof. Just be careful with your belonging lah if you go to any function in that so called 5-star hotel.

The Mania of Flag