More than half of Sabah is in wilderness, so there are something which we should watch out for, or they will remind us that they deserve our respect. I sweat whenever I hear ignorant tourists say something like, “Oh dear, the orangutan / hippo / sun bear is so cute!!!” Wildlife is not our house pet. They never like human so don’t expect they love our caress.

Bornean Pygmy elephant (Elephas maximus borneensis) is the biggest mammal in Sabah, and there are less than 1,500 of them left. With 2.5 Metres in height and body weight in tons, you know you can’t afford to trust this giant babe. 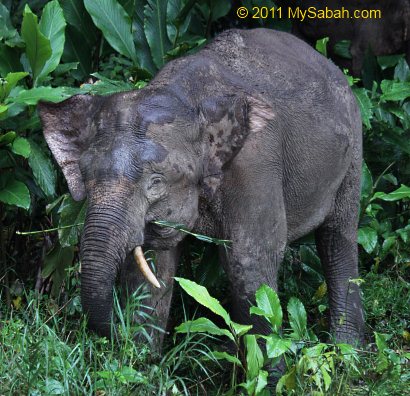 Above: the habitat of our elephants is destroyed by logging and oil palm plantation. Read more here…

Due to oil palm plantation, logging and land clearing for farmland, the loss of lowland forest has brought the elephants into more contact and conflict with people. Bornean Pygmy Elephant is timid but also a very protective parent. The overexcited tourists, who come too close to the herd that has calf around, would find themselves in danger. 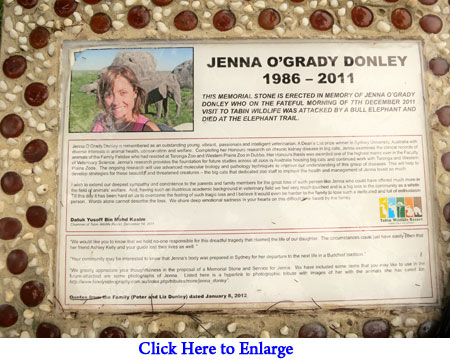 In 2011, a Australian tourist, Jenna O’Grady Donley, was stabbed to death by a bull elephant in Tabin Wildlife Reserve. She was an animal lover and sadly she was too close to a bull elephant which was said to be mentally unstable. Rest in peace Jenna. 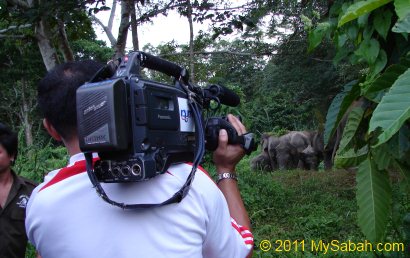 Above: the elephants are in stress even at this distance. They round up to protect the calf. Photo of Kinabatangan.

In the video below, you can see that an elephant was agitated when we were too close to them:

In contrast to their domesticated cousin (pig), wild boars are agile and the favourite target of hunting game because they are difficult to catch. Wild boars are elusive and prefer to flee from our sight in most cases, so it is hard to believe that they have the record of killing bears and tigers in battle. They can pose a threat to people if they want to protect their young. Jungle trekkers are best to move away quietly and leave them alone. 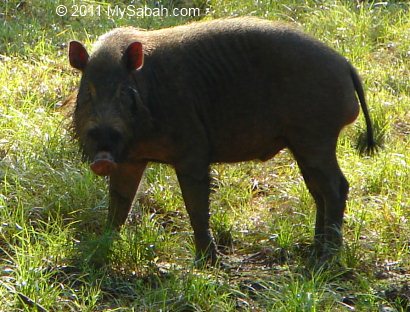 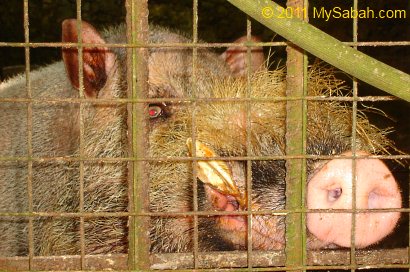 Above: adult wild boar has long teeth that can kill.

Tembadau (Banteng) is supposed on the list. It is a wild cattle similar in size to domestic cattle and is totally protected under the Sabah Wildlife Conservation Enactment 1997. However, I find the domesticated cattle are far more dangerous, as they always roam in middle of the road. You will need to be extra careful when you drive in the countryside. Do not honk them, otherwise the group will disperse and running like mad cow in all directions on the road, causing danger to other motorists. Well, I will not pay a single cent of compensation for accidentally knocking down cattle, because it is illegal to let them wander around in the first place. 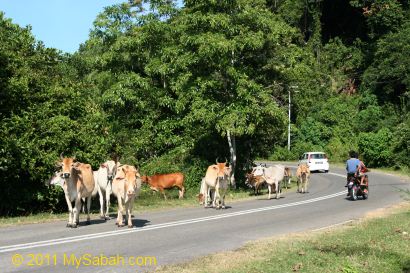 Saltwater or estuarine crocodile (Crocodylus porosus) is the largest crocodiles in the world and they are found in rivers and swampy areas of Sabah. Crocodile is the master of sneak attack, so it was a big threat to the villagers who washed their cloth and fished in the rivers. 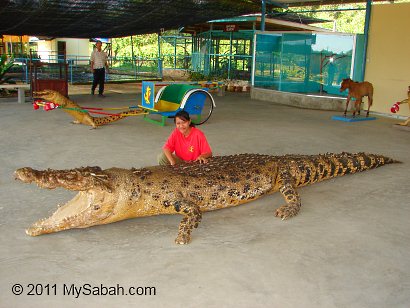 Above: this crocodile killed a few villagers. Photo of Tuaran Crocodile Farm

Basically there is no hope for survival when we are grabbed by the powerful jaws of this 4-Metres aggressive monster. Sometimes people see them having sun bathe in unlikely places such as Tuaran and Papar. 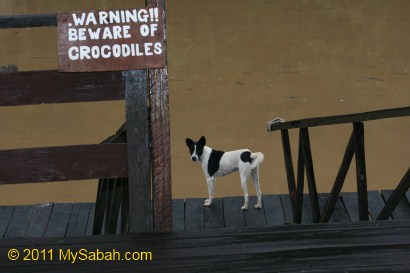 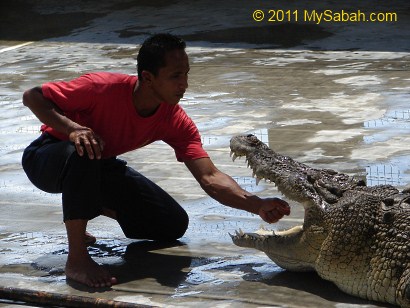 Vipers and cobra are the most famous among them, but you should fear the banded sea krait or yellow-lipped sea krait (Laticauda colubrine) the most, because one drop of its venom can kill three adult and there is no antidote! 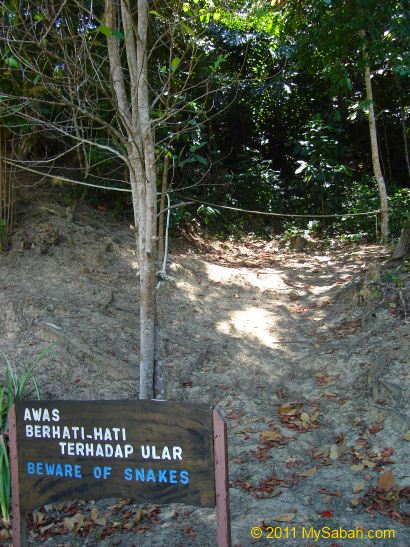 Sea snakes are trapped in the fishing net occasionally. When the unlucky fisherman is busy sorting out the fishes, he might be bitten by sea snake without knowing it, due to the anesthetic effect of the venom. The poison will dissolve the muscles of his body and his urine will turn into cola red color. At last, he dies in enormous suffering. Good news is – sea snakes are not aggressive unless threatened, though all sea snake species are highly venomous.

Above: sea snake is more poisonous than cobra but it’s not aggressive. Photo from Banggi Island 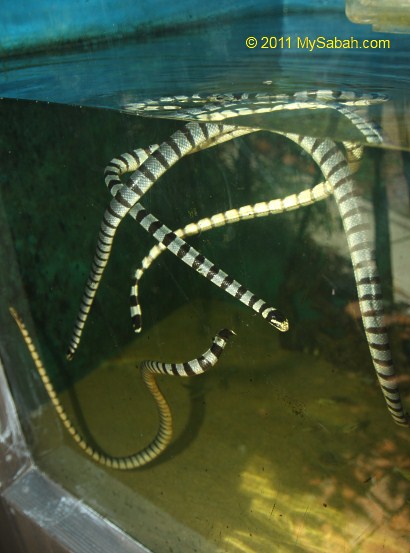 Above: yellow-lipped sea kraits in fish tank of the Green Connection 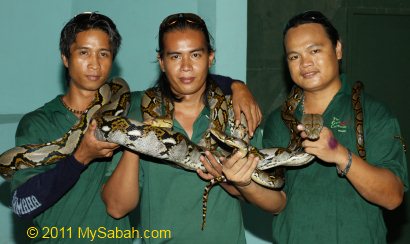 Above: reticulated python can eat a human if it is big enough

This passive little semi-transparent marine life lurks in the sea, but can kill the unfortunate swimmers by its deadly touch. The two dangerous species found in our water are the Box Jellyfish or Chironex fleckeri, whose toxin could kill victims in less than five minutes, and Ubur-ubur merah. 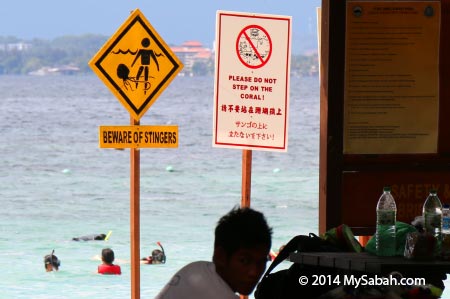 Above: jellyfish warning on Manukan Island

The application of vinegar, which contains acetic acid, can disable the jellyfish’s nematocysts that have not yet been discharged into the bloodstream. After the death of a few tourists, vinegar is always available for such first aid in islands of Tunku Abdul Rahman Park. If you are stung, look for the lifeguard on the beach immediately, they know what to do.

Let’s forget about the honey. You will not hesitate to get away from their nest as far as possible. If one stung is painful, 100 stung will be a painful death, so terrible that nobody would want to commit suicide by intentionally provoking the hornets. It is also advisable not to agitate a hornet near a nest, as the distress signal will trigger the entire colony to attack. If that happens, submerge into the water is probably the only way to save you. For your info, perfumes can be mistaken as the pheromone of hornets and set off the attack too.

Hornet also likes to build nest under the roof and water tank of houses. The nest may be as small as a tennis ball in the beginning. But if you don’t eliminate it in early stage, it will grow to the size of sandbag and pose a serious threat to the residents. By that time, only Fire Department can help you to remove the huge nest safely. 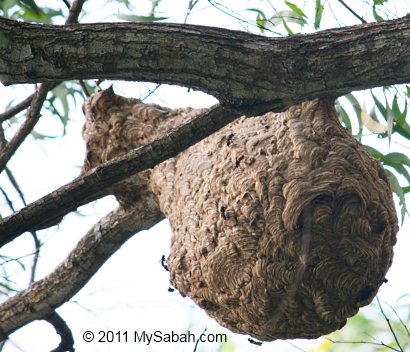 If you are too close to a bee hive, the patrolling bees will come and buzzing around you to investigate if you are a threat. It’s very important that you stay still and don’t agitate them (with sudden move or swatting them). After the guard bees leave, move slowly away from their territory. In contrast to honeybee, a hornet can sting multiple times. If a child has anaphylactic reaction to bee sting, attack by one hornet is deadly enough.

Finally the last one but not the least is mosquito. If one mosquito gets into your room, you know you will have problem sleeping whole night long. Anyway, causing bad sleep is not how mosquito kills hundred of people every year. Mosquito is deadliest disease vector which spreads infectious diseases such as Malaria, Dengue and Yellow Fever. Sabah is the red zone for Malaria. Therefore, please make sure your house is free of stagnant water that serves as a breeding ground for them. 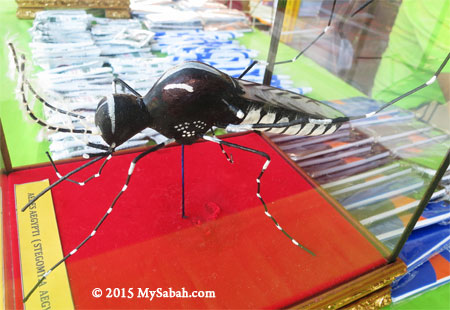 Pic: Among all mosquito species, Aedes aegypti (locally known as Nyamuk Aedes) is the most dangerous, as it can spread diseases such as dengue fever and yellow fever. It is easily recognized by white stripes on its legs and body.

There is no tiger in Borneo, in case you wonder why it isn’t on the list. As you may see by now, dangerous animal is not necessary a man eater or a big animal. Even if it can look friendly and adorable, wildlife is wild, never treat it like a pet. Most of the time, those wildlife look timid and afraid of human, and tourists can get away 99.99% of the time. But you need only one incident to lose your life.

4 thoughts on “Dangerous Animals of Sabah”