Owning a car is a “symbol” of freedom to most school leavers. I’ve gotten a taste of freedom at 9 when I got my first bicycle. With a bicycle, 5 KM radius around my house was my territory. I could go fishing and exploration far away from home (parents). Even today I still like bicycle, as it is environmentally friendly and a good exercise. Not only that, I can get in touch with the big world on a bike, because I can see, smell and feel the surrounding. No matter how expensive your car is, the driver is locked in a small space inside a car. 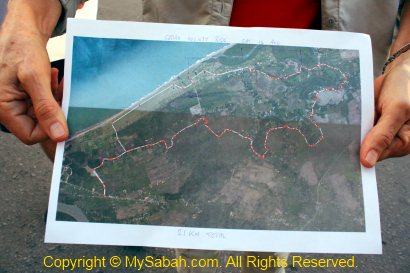 Last month I was invited to join a cycling day trip around Kuala Abai of Kota Belud town. I accepted it without second thought coz I loved to feel the freedom once again. The cycling trip was nearly 30 KM on the countryside road. Since we are beginners, the ride is mainly on flat ground with mountain bike. The organizer got our body height to adjust the mountain bike, so we could peddle with our legs fully extended. Cycling with squatting position is inefficient and waste energy. 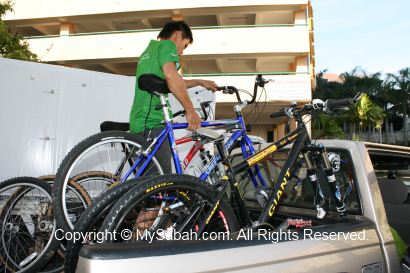 After a short briefing in the morning, we loaded our mountain bikes on a truck. There was a truck to keep our pack-lunch and water in the icebox (I called it “Ice-Cream” truck haha). This truck would follow slowly at a distance behind the cycling group, in case of emergency. Then we departed to Kota Belud. 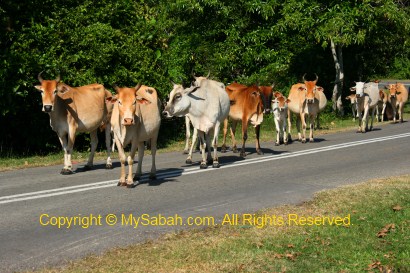 We reached the starting point in Kota Belud after an hour. You know you are in Kota Belud when you see many cattle roaming on the road. They are always on the way, but motorists should not horn them. Or they will turn panic and run like mad cow, endangering everyone on the road. 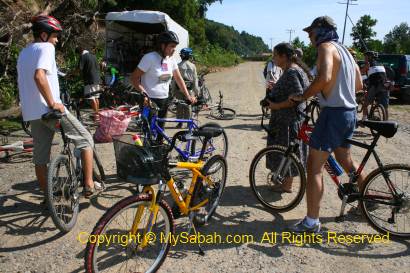 To avoid absorbing heavy dose of UV ray from the sunlight, we put on our sunblock. We did some final test on our bikes then off we went. Luckily my legs still remember how to ride a bicycle. That brought back my childhood memory! I can even hold the steering with one hand, taking photo with another (don’t try this outside your home). 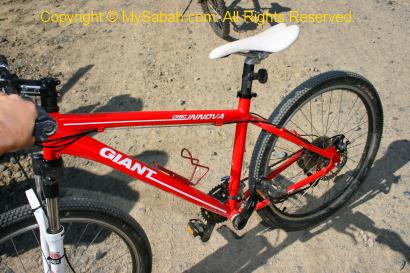 Oh ya, above is my mountain bike that lent by the organizer (Fieldskills). They say this is imported from Australia and costs a few thousands Ringgit. 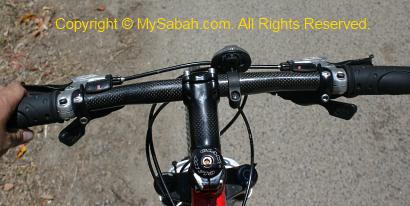 This bike has gear setting next to both handlers to control front and rear wheel chains, for different speed and strength. Honestly, I find it more complicated than my car. Anyway, you can always try to play with the control, to get maximum speed and comfort. 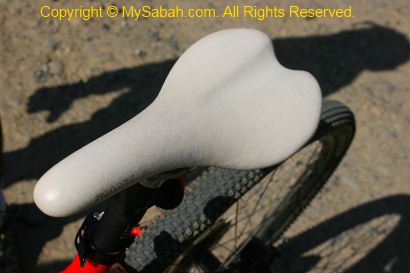 This is a typical sport bike that has no seat padding. I was not wearing a cycling short that has padding and chamois (“shammy”) under my butt. During the bumpy ride later, I was like being sodomized by this egg-crusher seat (just kidding). Because of the extra weight from my camera and bag, my butt was quite painful at the end. Next time I will eat more to get a fat ass for extra padding. 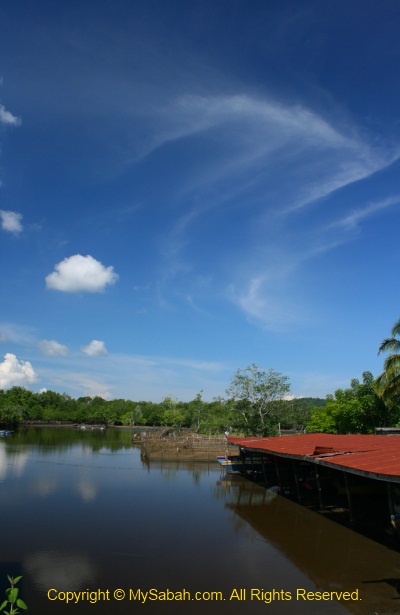 Thanks to the good weather. The sky was so blue and I enjoyed the breeze on the bike. The road in countryside is small but not many cars. Shortly I saw a beautiful river. 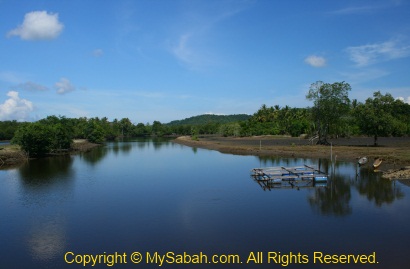 As I didn’t want to be left behind by others, I took most of the photos on the bike. I only stopped when the view was really scenic. Actually there is always a staff cyclist follows behind, to take care of those slower movers like me. 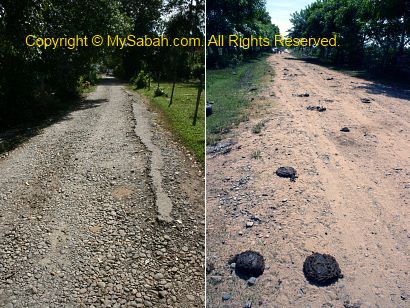 Besides paved road, about half of our cycling trip was on bumpy gravel, dusty and sandy roads. It was quite an “egg-crushing” experience. Luckily mountain bike is designed to deal with irregular surfaces. Its absorber kept my eggs intact. 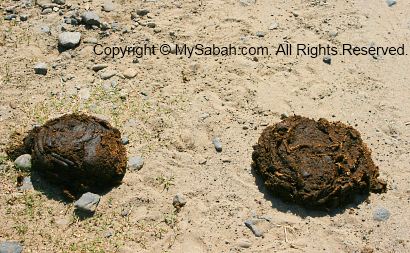 We also needed to keep alert for those “land mines” (cow dropping) that seemed to be everywhere. 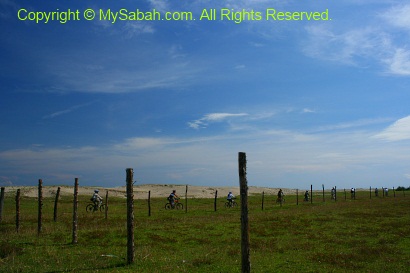 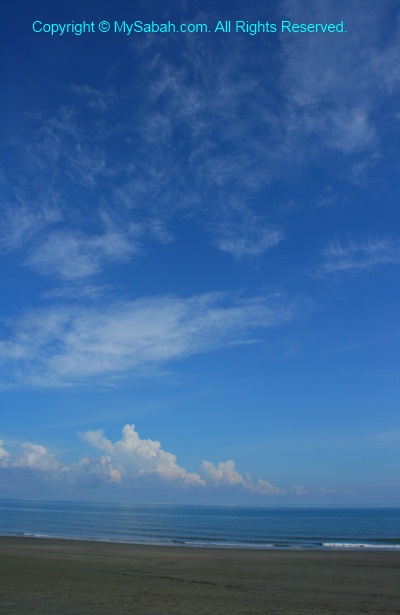 We passed by Pantai Emas (Golden Beach). I didn’t know Kota Belud has such a long and beautiful beach. It is a private land. I think this area can be sold to big hotel for millions. You can see Mantanani Island from there. 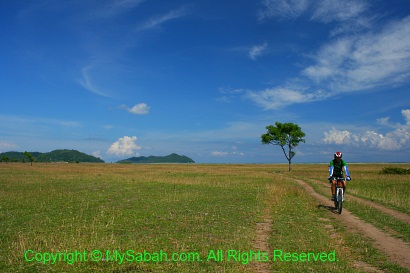 Everything is green in countryside, and it becomes a picturesque place with blue sky. There was no busy moving cars and noisy people around, so the time was like frozen, so relaxing that I wanted to play guitar to sing a song or something. 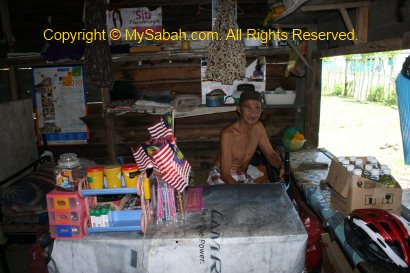 Cycling under the scorching sun for only an hour, everyone was already hot and tired. We stopped briefly at a local grocery store for a short break. We did not even reach quarter way yet. The villagers here were very friendly. They even waved hands at us. 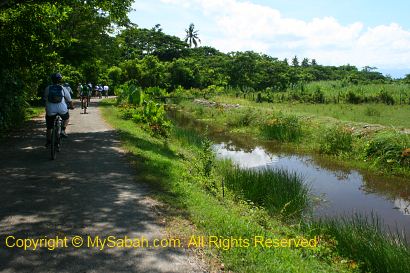 For many years I didn’t cycle around, I live in city, and sharing busy road with cars only means danger. One of the cyclists told me that he ever tried to cycle 11 hours to the Tip of Borneo (in Kudat town). That’s 200 KM! Sound so crazy. If I were him, I’ll cycle with wheelchair the next day. 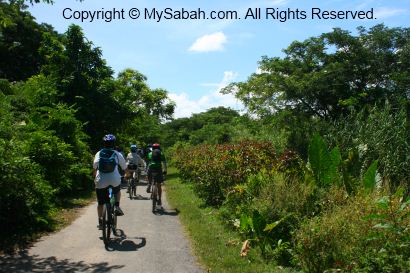 Sabah doesn’t have any cycling lane for the bicycles. On the road of Malaysia, road users are “expected” to give way to whoever is bigger than their vehicles, so cyclists get the least respect from the trucks, buses, motorcycles and cars. Government is also like that, they even remove the pedestrian lane to expand the road for the cars. 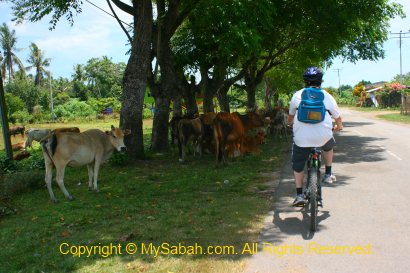 You can see many cattle along the road. Cattle is not meat eater so they will not attack human. But just don’t get too close to their calf. I believe Devil also doesn’t take meat, as any animal with horn is a vegetarian.

You know you are in a “kampung” (village) when you see people let their livestock roaming freely. If you scare the chicken, they will try to outrun you, heheh.. You also know you enter a Muslim village when you see no dog. Most Bajau people in Kota Belud are Muslims. 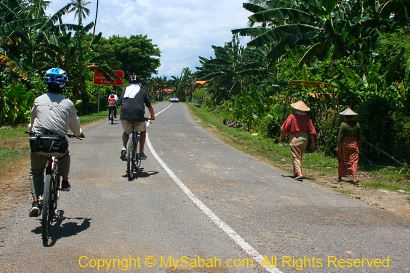 We also smiled and waved hands to every villagers we saw along the road. We were acting like peace ambassadors, bringing peace and love wherever we went, haha.. 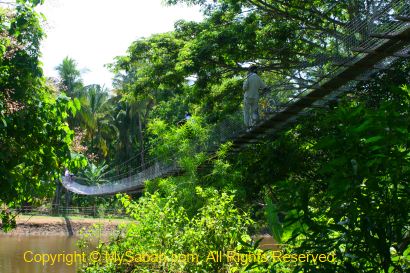 Then we needed to cross a suspension bridge on a wide river. 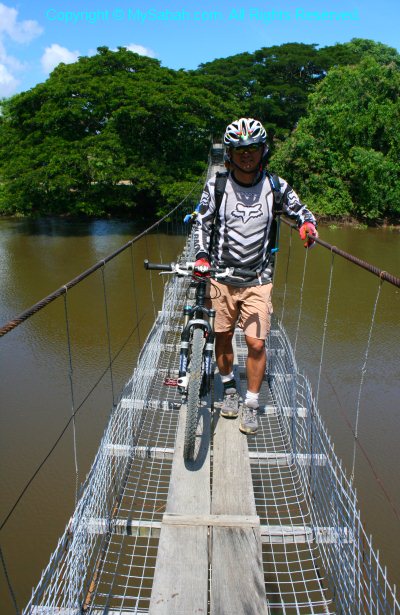 We got down and walked our mountain bikes to other side of the river. 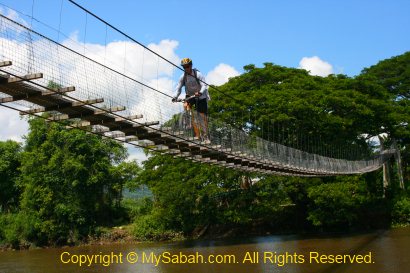 Then Simon, an advanced biker, showed us the “right” way to cross the bridge. He just ride over this 100-Meter bridge. To beginners like us, this is such a WOW stunt. 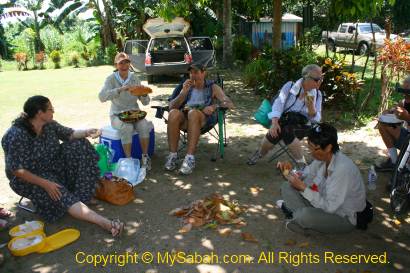 We enjoyed our pack lunch under a tree shade about 12pm in Merabau Village. Gee… it was such a hot day. I drank two bottles of 100Plus to rehydrate myself. Though we were only halfway and exhausted, our spirit was still high. It has been an interesting and fun experience. 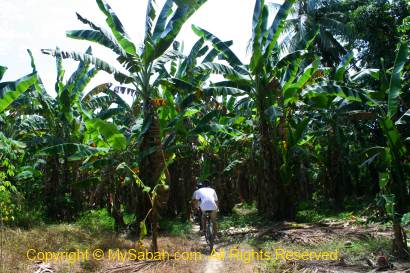 After a short rest, we hit the road again. We even cycled inside a banana plantation. That again reminded me of my naughty boy childhood, when I cycled to any corner, like nobody’s place. The good thing about bike is you can reach any narrow path that no car can get in. 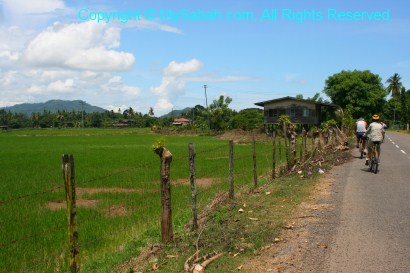 Kota Belud also produces lot of paddy (rice) so do expect to see many paddy fields. 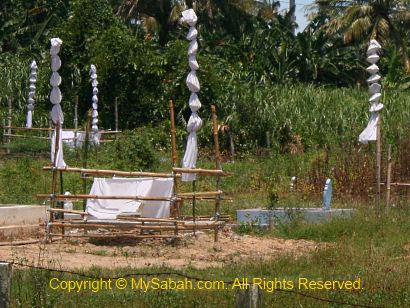 There is a small cemetery next to the road, I don’t know what the white decoration means. Is it a Muslim or Bajau tradition? 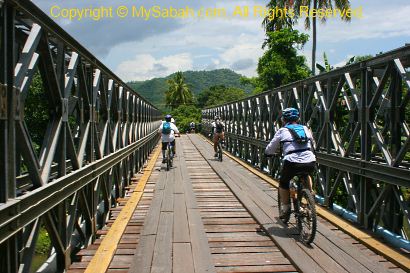 We passed by wooden, cement, suspension as well as steel bridges. 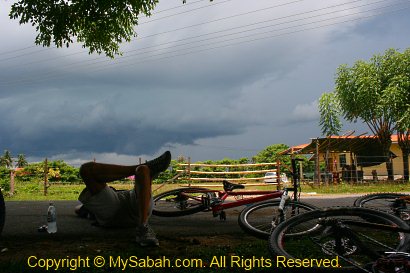 The afternoon sun was getting hotter, again we took a nap under a tree around 1pm. This is not a race, why rush to finish the trip, right? Then we heard distant thunders, a dark and dense cloud was coming to our way slowly. The sky became shady, but it was more pleasing for cycling. 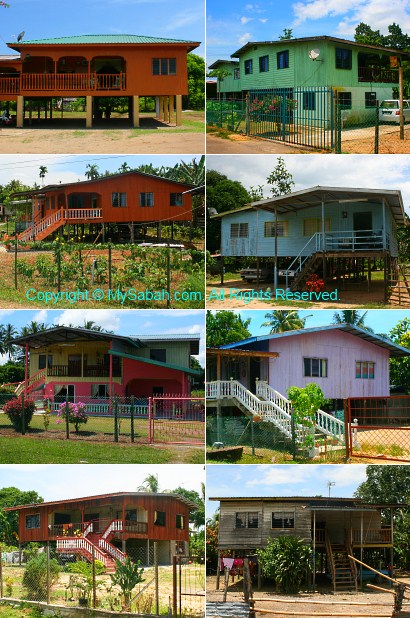 The Bajau people in Kota Belud is the most colorful indigenous tribes of Sabah. They love bright colors such as yellow, red and green. This reflects on their handicraft as well as their houses. If you visit Kota Belud, do pay attention to their traditional stilt houses in different colors. Even though many wooden houses are replaced with cement houses today, they still keep the interesting design and colors. 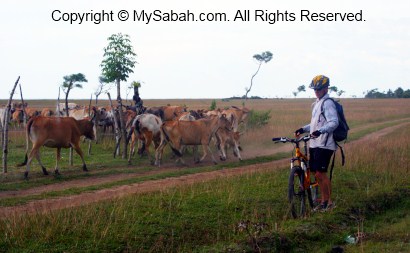 It started to rain heavily after half an hour. Worry that my camera got wet, I handed it over to our Ice Cream truck. I peddled quickly in the rain. On the way, we saw some cattle taking shelter in veranda of a small shop. It was so funny but the camera was not with me. I got totally wet in the rain, but it also washed away my tiredness. In fact, it was only a few KM left, and we were back to our starting point at 2pm. This ended our trip and we went back to Kota Kinabalu (by car, of course).

Here is a story about myself. Due to a near-to-death cycling accident in Peninsular Malaysia, I didn’t go cycling for many years. Many years ago in Christmas Eve, I was cycling on a road in high speed. Without signaling, the car in front of me made an abrupt left turn. Too late to brake, my bicycle knocked on the left side of the car and the tremendous momentum threw me and my bicycle over to other side of the car. In second, I felt that the world was spinning and I landed on my back. My back was so painful that I thought I would die. Laying on the ground for nearly a minute, finally I managed to stand up. I remember the “Oh sh*t! Oh sh*t!” face of the driver. Only my elbow suffered minor bruise and no bone was broken. He drove away after I assured him that I was fine.

Actually it was partly my fault too, I don’t blame the driver coz my bicycle had no light and I didn’t wear any reflective safety vent, so it was very hard to see me at night. Anyway, just to share the lesson with you. If I landed on my head, the force was enough to break my head. So a helmet is a must for cycling. Nowadays, there are more and more hit-and-run drivers in Sabah after they learn that police has problem to trace them. And also thanks to JPJ for cultivating so many “Kopi-O” licensed drivers on the road, turning driver license into license to kill. In other countries, it is very hard to pass driving test in first time, unlike Malaysia. So be extra careful when you have fun cycling in city.

10 Best Souvenirs to Buy in Sabah

7 thoughts on “Cycling in Kota Belud, the Cowboy Town”