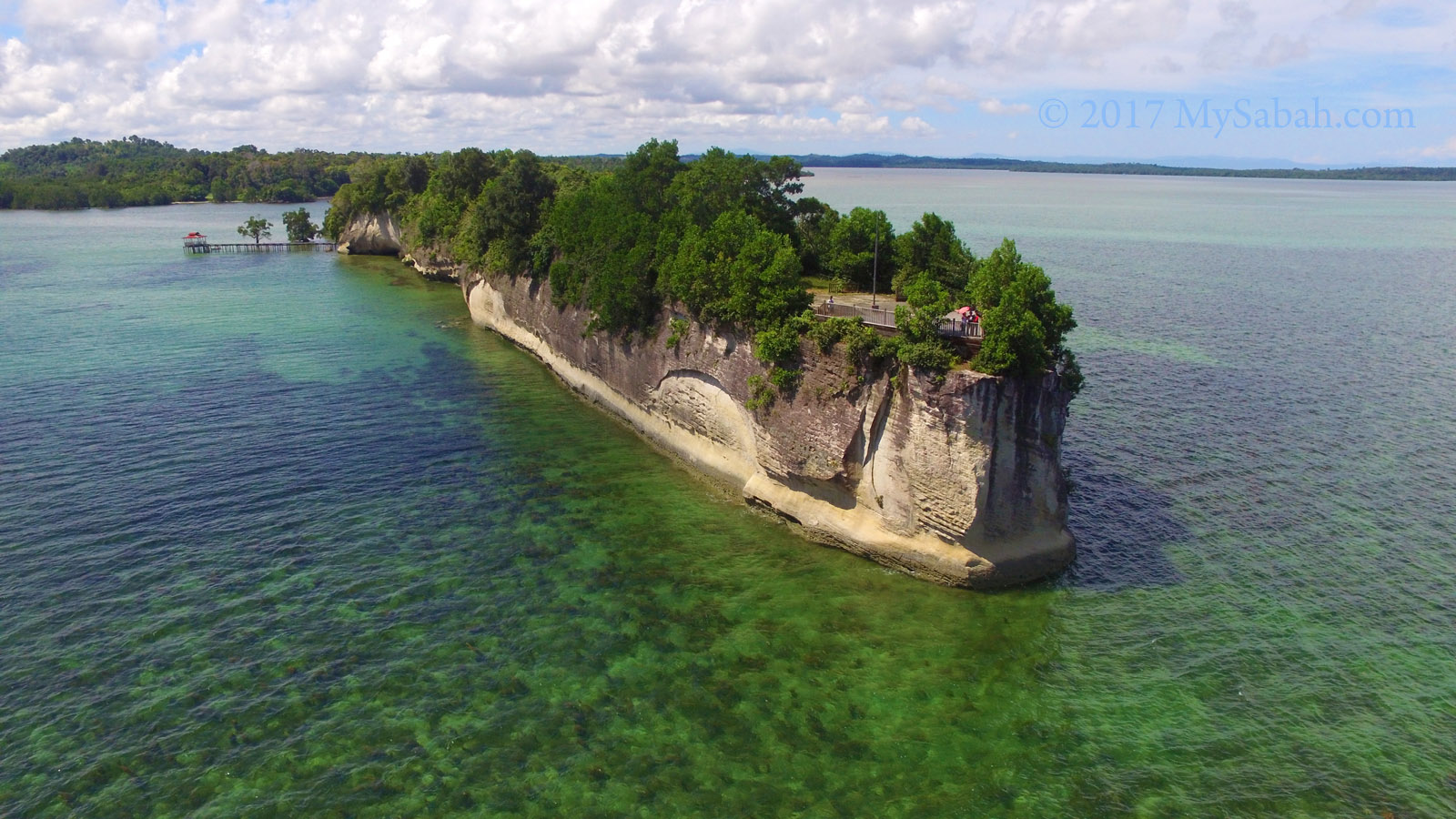 Are you a tourist who loves sightseeing at popular attractions, or a traveller who enjoys exploring destinations off the beaten path? If you are a traveller, visit Pitas, a remote area of Sabah that even Internet doesn’t know much. If you google Pitas, you will find a round pocket bread named Pita instead lol.

Kampung Malubang (or Malubang Village), a peaceful fishing village in Pitas, has the saddest legend in Sabah. This story debuted in musical theater of Sabah Fest 2017 and received overwhelming responses. Tickets were sold out to people who wanted a good cry.

Supirak Island is amazing because it resembles a petrified big ship. Locals say it was a ship turned into a rock due to a curse from a mother to her son. It’s really shocking because mothers would never want to harm their son. Why did such terrible thing happen?

Ok, the legend goes like this. Long time ago in Kougun Village there lived a couple. The man was a fisherman, who went missing in a fishing trip and left behind his pregnant housewife, Supirak (or Odu Gerawang). She gave birth Si Ragam, a boy grew up as a responsible and hardworking man who really cared about his mother. He built a small hut for both on the seaside of Torong Puteh. To Supirak, Si Ragam means everything to her.

One day, a ship docked at Torong Puteh to be resupplied. Being ambitious, Si Ragam asked for his mother’s permission to work on-board for better prospect. He promised Supirak that he would return home one day. Before he left, his mother took a strand of his hair as a keepsake.

Due to his diligence and intelligence, Si Ragam became the captain of the ship. A few years later, his ship landed on an island called Pulau Intan. He met the king in Istana Bahkiah with his merchant boss. During the visit, Ragam fell in love with the princess, Dayang Dundunai, and married her months later.

One day Si Ragam was on a voyage with his wife and parked his ship at Torong Puteh. The villagers were so excited when they recognized Si Ragam. They held a big party to welcome Si Ragam. Supirak was so happy when everyone told her that her beloved son was back.

She boarded the ship to meet her son. Unfortunately, seeing Supirak in ragged clothes, Si Ragam was too ashamed of acknowledging her as his mother in front of his royal wife, and he disowned Supirak and chased her out of the ship.

Devastated and disheartened, Supirak rowed back to the shore. She was then mocked by the villagers. In deep resentment, Supirak took out Ragam’s hair and cursed her son. Suddenly, a heavy storm came to rock the ship. Ragam regretted his wrongdoing and cried aloud begging for forgiveness. It was too late too little. The ship and its occupants turned into stone.

Even today you can see the six “relics” of the legend, which are located near to one another in Malubang. FYI, Batu means “Rock” in Malay language.

The ship, Supirak Island, is the highlight of the legend. It’s accessible as you can hire a boat from Malubang Village to send you there.

The boat ride to Supirak Island takes less than 10 minutes from Malubang Village. In good weather, the shallow sea is in beautiful emerald color, like something from the world of legend.

The district government tries to develop this island as a tourist destination, so jetty and structures were constructed on the island.

When I reached Supirak Island, there was a local fisherman family fishing and swimming around the jetty. Though they are not used to tourists, they are very friendly to outsiders.

We walked on the 30-Meter wooden boardwalk to enter the island, followed by a 12-Meter steep staircase that helps us get to the top of Supirak Island.

When the government developed the island, a few 2,000-year-old skeletons and relics were found. I don’t know whether these are Si Ragam and his followers.

In the centre of the island, there is an observatory platform with some exhibition about the legend in English and Malay languages. However, the pictures are faded and the text are barely readable.

Then we walked about 200 Meters on a paved path under the tree shade to reach the bow (front) of the island. I saw a few Megapode nests along the way.

The tip of Supirak Island is pointing to the north of Sabah, so you can see Banggi, Balambangan and Maliagin Islands from its top. In fact, Banggi Island is only 20 minutes away by boat ride.

There is no toilet and other recreational amenities on the island, so nothing much you can do there, except playing Titanic pose and pirates of the Caribbean. The view up there is nice anyway.

At the beach facing Supirak Island, you can find the house of Supirak, which is a stone arch now.

Imagine she was standing there looking at the ship with broken heart. What her son did to her was unthinkable. Abandoning parents is simply an inhuman act in any culture.

Not far in front of Batu Gerawang are three freshwater wells, which were the water supply for Supirak.

During my visit, these waterholes were submerged in high tide, so I wasn’t able to taste it to tell if it’s freshwater. Anyway, it’s confirmed freshwater by the locals.

One of the wells is enclosed in cement structure which is meant to preserve it (see pictures no.1 above). However, the wall obstructs the flow of the freshwater, causing sand piled up and cover the opening, not good.

Batu Talam is said look like a food cover.

You can land on it and make funny surfing pose under its wave rock lol.

Next is the Batu Berunsai islet that looks like a group of people.

The locals said these standing stones are the villagers who were turned into rocks in the party for Si Ragam.

This is a beautful islet with mangrove trees grow between the rocks. At one side of the island, I saw rocks that look like killer whale and shark fin.

One of the rocks looks like a woman in grief. Could it be Supirak?

These three rocks with flat surface were the plates or containers for the food, our guide said.

You can climb onto the rocks to take some interesting shots. It’s kind of cool, like a music album cover.

The following video gives you an overview of these rocks:

These six rock wonders are in the sea. You need to get a boat to reach them.

Just ask around in Malubang Village. Most villagers own a boat, so you can easily charter a boat for less than RM80 (about USD$20) for a half-day cruise. The small boat can take about 5 passengers, so each person pays less than RM20 after sharing the cost.

A day trip to these rocks is possible, though overnight stay is recommended. From Kota Kinabalu City (KK), there are two ways to reach Supirak Island and other rocks. Try to arrive Malubang before noon, so you can have more time to enjoy the tour.

In KK city centre, you can get a long distance bus / van / taxi readily near Padang Merdeka (Merdeka Field, see Location Map) to Kudat town, which takes nearly 3 hours one way. Then go to the harbour at the edge of Kudat town to charter a boat. That would cost around RM500 (about USD$125) per boat, and it can reach Malubang within an hour (one way).

This requires you to drive a total of 220+ KM (5 to 6 hours road trip), so consider this option only if you plan to overnight in Pitas or Malubang. You need to own (or rent) a transport, preferably 4-wheel drive. First drive from KK to Pitas town (160 KM) on asphalt road, then drive another 60 KM on gravel road to Malubang (and enjoy 2 hours of free butt massage). At Malubang Village, you can hire a boat to visit the rocks. For accommodation, you can stay in Malubang Homestay in Malubang Village.

The GPS Coordinates of Malubang Village is 6.959509, 117.060136 (see Location Map). Please keep in mind the village is so remote that it has no data and Internet connection. You would have problem if you navigate with Waze or Google Map.

FYI, the plot of Supirak legend is 90% similar to story of Si Tanggang, which is very well-known in Peninsular Malaysia. However, you only can see these legendary rocks in Sabah. 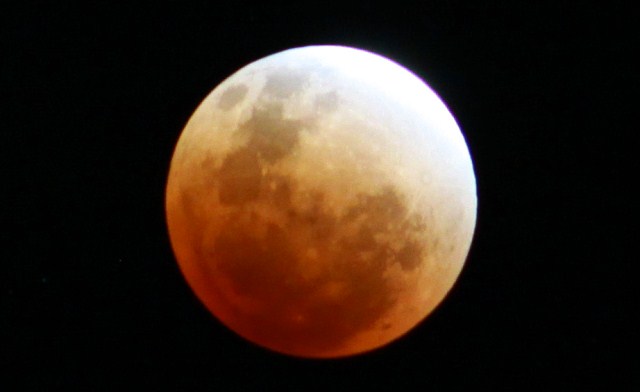 The red moon in Sabah