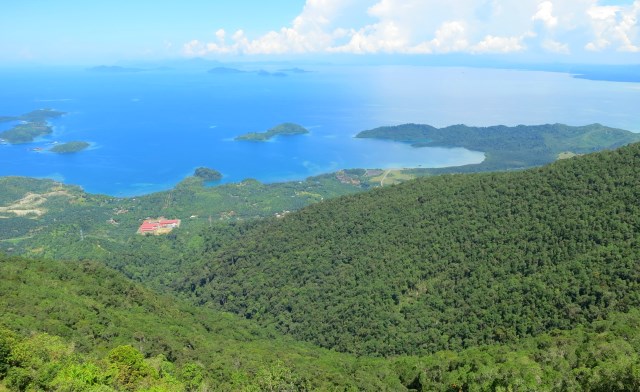 Looking at the increasing luxurious condominium built on the hill of our city, you will have no doubt that people are willing to pay a lot for scenic view from the top. For Lahad Datu town of Sabah, the best view point will be on Mount Silam, which is only 10 Kilometers away and one of the highest place in this district. From its top, you can have a bird’s eye view of Lahad Datu town and its surrounding mountains, forest and the beautiful Darvel Bay.

Pic: Mt. Silam is not far away from Lahad Datu.

Luckily, Mt. Silam is not developed into a condo area for the rich. Instead, it is part of the Class-1 Sapagaya Forest Reserve fully protected by Sabah Forestry Department (SFD). Not only that, SFD also builds an observation tower on Mt. Silam, name it as “Tower of Heaven” (Menara Kayangan in Malay language) and open it to public in year 2012. 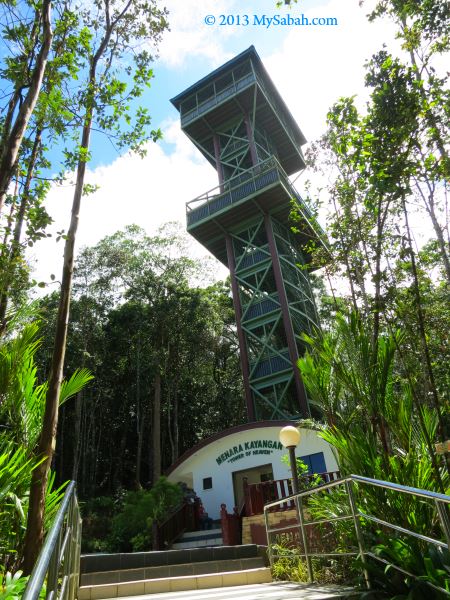 Tower of Heaven (Menara Kayangan) is 33-Meter tall (about 108 feet) and located at 620 Meters above sea level on Mount Silam. The tower is a very solid building supported by steel and cement structure, and able to hold up to 30 visitors. As this is a forested high ground, the air here is cooling and refreshing. You will feel so comfortable that you want to stay longer for the nice air and view. 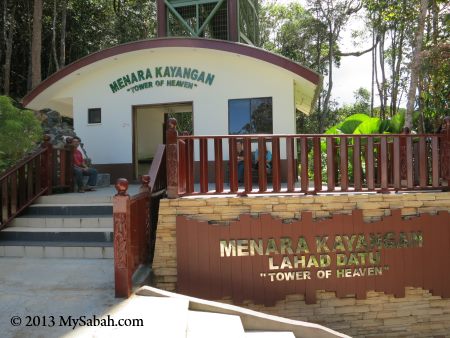 Pic: the entrance to the top of tower, but no hurry… 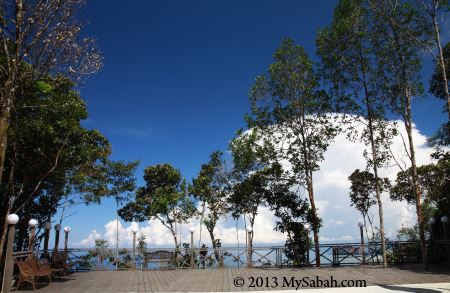 For those who don’t want to climb 8 floors of staircase to the top, they can check out the viewing platform in front of the tower. 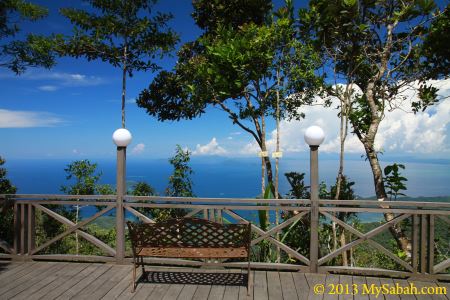 Oh dear, I can sit here whole day for the spectacular view of Darvel Bay and its islands. 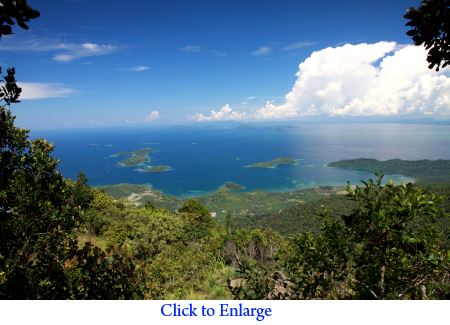 Pic: Darvel Bay and the islands

If you wonder why I call Darvel Bay the “Mouth of Borneo”, you may look at the map below: 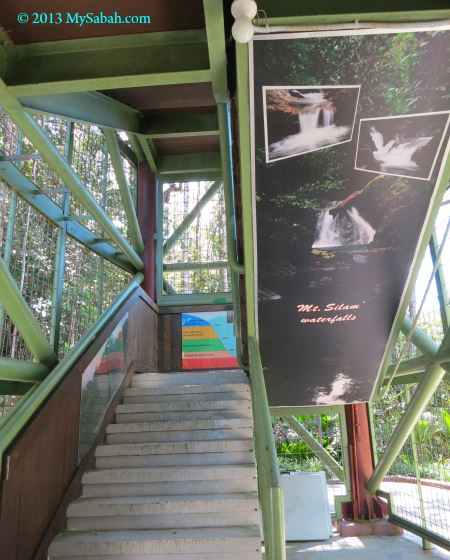 Now going to the tower for the best view up there… It takes less than 10 minutes to reach the top. Sorry, there is no elevator / lift. 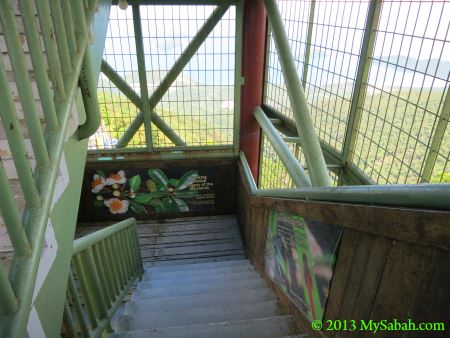 Along the stairway are some posters with information and photographs about Mt. Silam. Just take your time and walk up slowly. 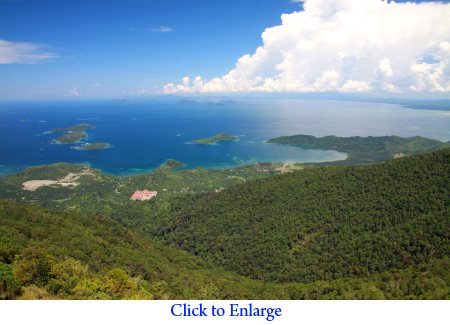 Here you go. The heavenly view from Tower of Heaven. 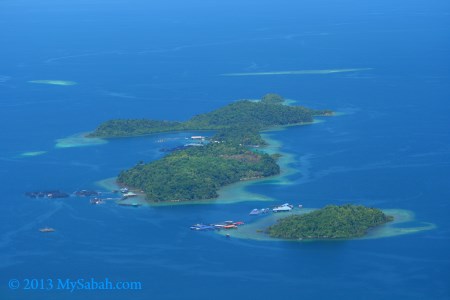 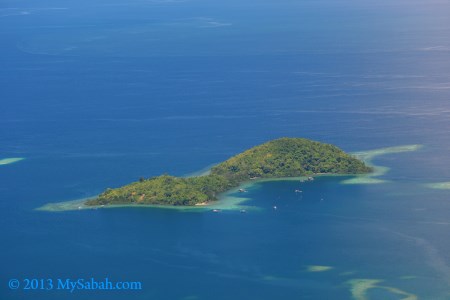 Overlooking the islands. These are big islands but they look so small from the tower. 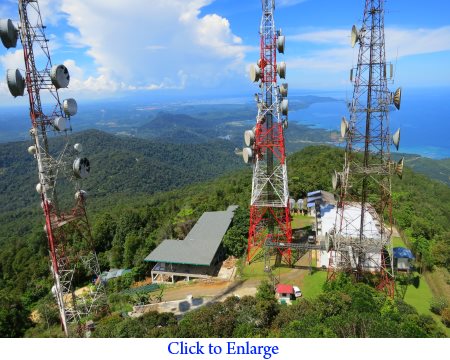 Pic: the telecommuncation towers next to Tower of Heaven. You can see Lahad Datu town far behind them.

For a virtual walking tour of the tower, you may watch the 3-min video below: 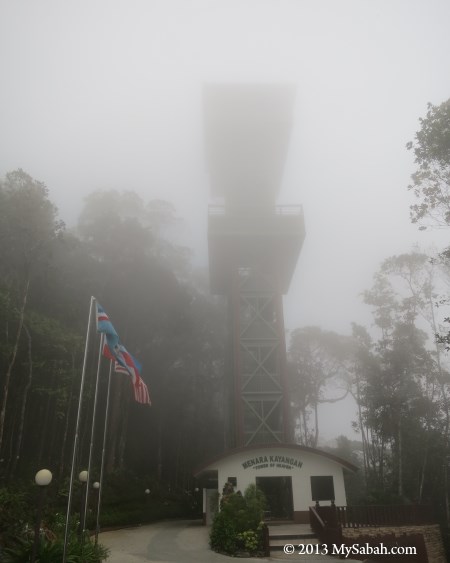 Sometimes Mt. Silam would be enveloped by dense mist, then you can’t see anything from top. This can happen anytime. 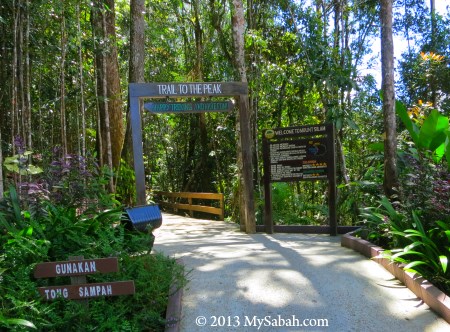 If you want to appreciate the nature of Mt. Silam, there is a forest trail behind the tower that leads you to its peak (height: 844 Meters). You may read my next post on climbing Mt. Silam. 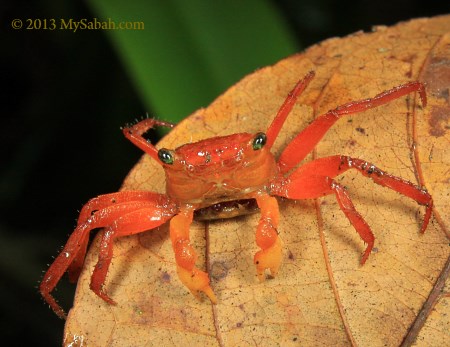 Lucky visitors would see the lovely, small and orange-red Silam Crab (Species: Geosesarma aurantium) in the wood near the tower. It is endemic to Sabah and only found on Mt. Silam! 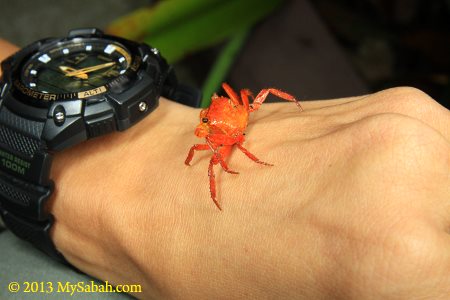 Silam Crab is a land crab that can be found up to the peak of Mt. Silam (884 Meters). Usually you could see them come up foraging among leaf litter after rain. 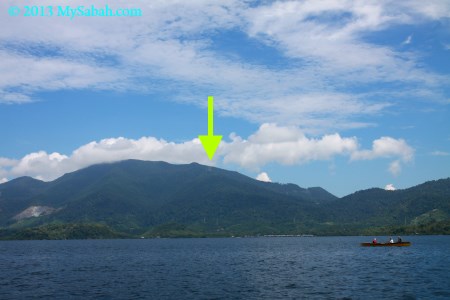 Pic: you also can see Mt. Silam from the sea of Darvel Bay. The tower is clearly visible during good weather. 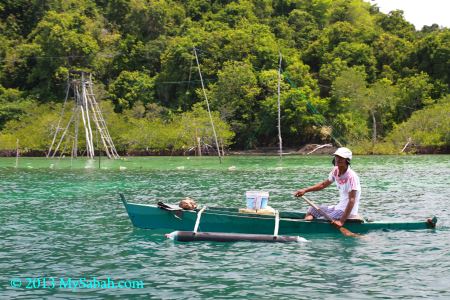 Pic: Darvel Bay is rich in seafood and an important fishing zone of Sabah. 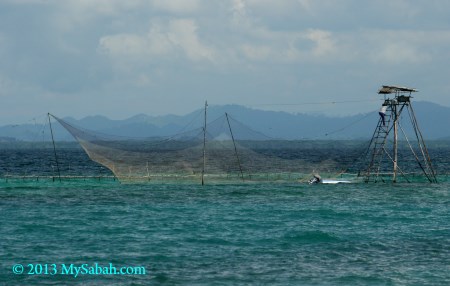 Pic: a fishing structure (called Bagang locally) near an island in Darvel Bay.

There is no public transport to Tower of Heaven but you can go there by taxi. The entrance is next to the Lahad Datu-Tawau highway about 10 KM from Lahad Datu town. For tourists who visit Danum Valley, they will pass by this junction, so it is a convenient stop for a short tour (and toilet break). 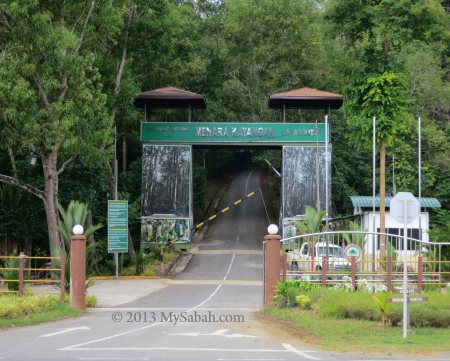 Pic: the entrance (see location map) and ticket counter of Tower of Heaven. Note the sign on arch says “Menara Kayangan”, instead of “Tower of Heaven”. 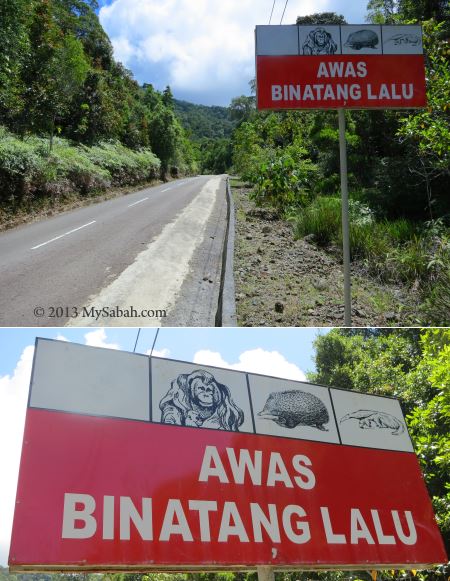 Pic: the sign reads “Beware of animal crossing”. I saw some pig-tailed macaques wandering here in the morning.

After the entrance, you need to drive another 10 KM uphill to the tower on a sealed road. 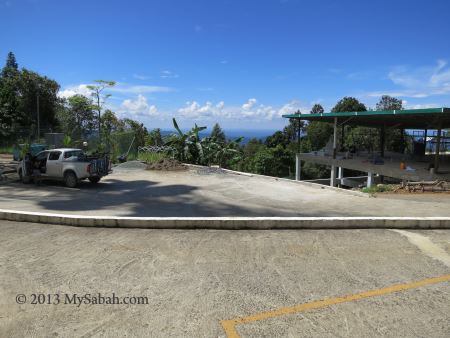 Pic: parking lot near the tower. At the right is a restaurant under construction. 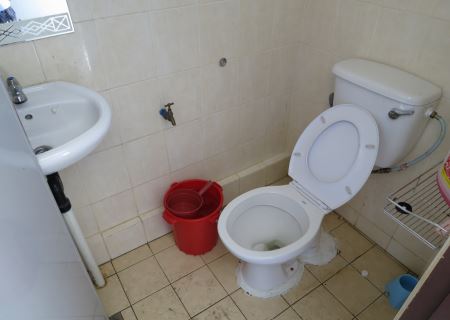 Pic: there is a male and female toilet at the base of the tower. Clean but quite small (note the door almost touches the basin). 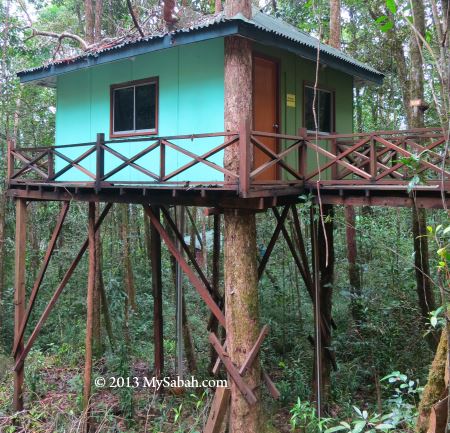 FYI, if you would like to spend a night on Mt. Silam, there are a hostel (accommodate 4 guests) and a resthouse (accommodate up to 10 guests) near the tower. You may contact Sabah Forestry Department (Tel: +60 89 242500) for more info or booking.

Besides the tower, there are many other things to explore on Mt. Silam, you may download the pamphlet below (published by SFD) for further reading: 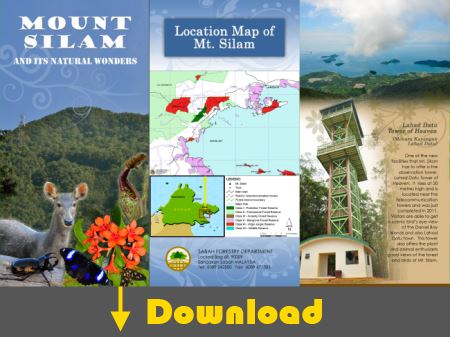 Anyone plans to go after reading this? 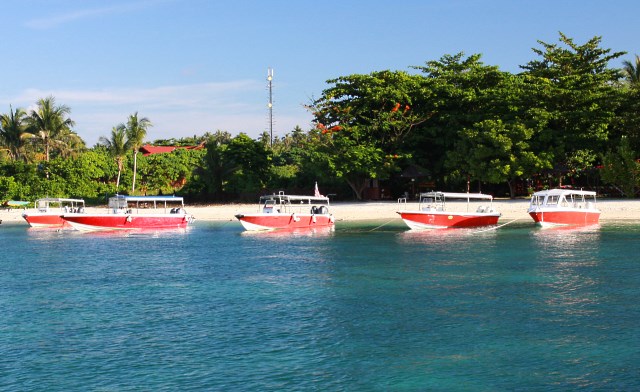 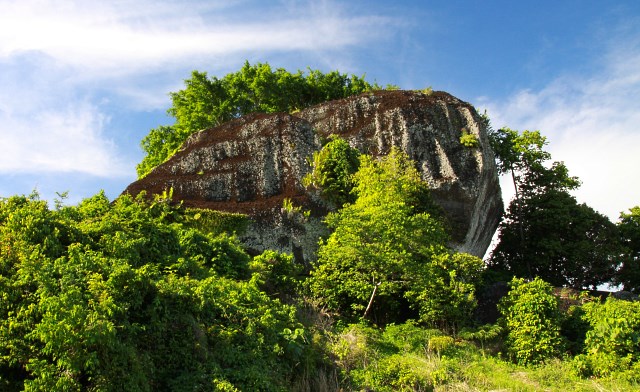 2 thoughts on “Tower of Heaven at the Mouth of Borneo”