Finally we were ready to climb Batu Punggul. At the beginning point of the climb, we could take a short trail nearby and “preview” Batu Punggul. Everyone was warned not to proceed when they felt they were not feeling confident to make it. Most chose to stay back. 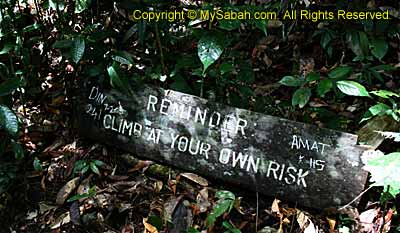 Unfortunately, my greed was stopping me to think twice about the challenge, as I had climbed Mt. Kinabalu a few times without problem. I didn’t foresee I would be defeated by a mountain that was so much lower. Look at the start of the trail (photo at left below), so scary man… 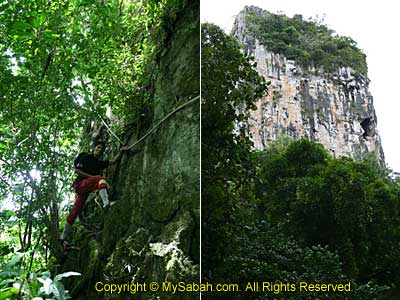 The guide said it was only a 30 minutes route. However, that is their time, not ours. It was a climbing route almost vertically upward. We were really climbing with hands and ropes, soemtimes tree roots. Tell you, there is NO trail that is flat for walking. Probably the guides were trying to motivate us. They always said the top was only a few minutes ahead, so I climbed… I climbed… and I climbed, but I still didn’t see the top. The rock was hard and sharp. We just tried to get firm grip of it and pulled ourselves up inch-by-inch to the top slowly. 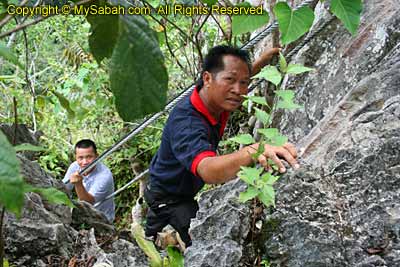 This was one of the most punishing moment in my life. I started to be dehydrated after 30 minutes coz I was running out of water. However, I didn’t want to give up at this point so I just disregarded the warning from my body. This place is the worst nightmare for height phobia. A single mistake you would fall all the way down the hundreds foot drop under your feet. The guide kept on reminding us not to look under our feet, to ensure that we wouldn’t lose strength due to fear. 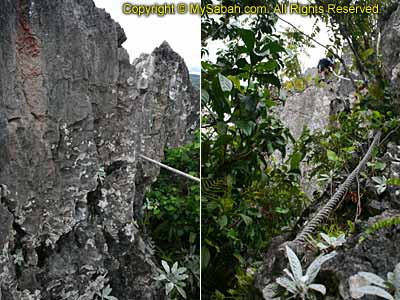 Without the guide, I doubt if I can make that far. There were many “traps” along the climb. Some small tree branches fell between the rocks, then covered by leaves on top over time, forming a very weak structured often mistaken as firm ground. I once stepped on it and missed the step, causing my both legs hanging in the air. There were lot of vegetation that cut my jean and almost poked my eyes while climbing. 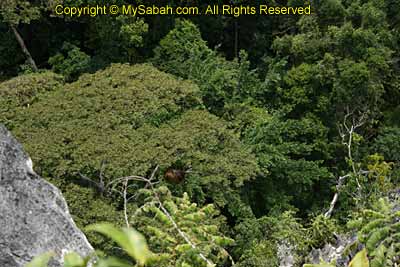 After nearly an hour of climbing, the afternoon sun was shooting hot beam to us. At last I reached the top of Batu Punggul, but the highest point was still 30 minutes away. I was sitting at the edge of the cliff. The tree canopy and river looked so small under my feet, and I could see Tataluan Village far way. Due to dehydration, I felt that I was overheated and would pass out if I forced myself to continue.

Therefore, I had to admit that I was defeated by Batu Punggul at 12:45pm, though the highest point was not too far away. Actually anyone who regularly exercises can make it. It is only that I am too weak and seldom work out. I was making a few wrong decisions too, e.g. didn’t bring enough water, wearing heavy hiking shoes. It is also advisable to climb as early as possible in the morning so you won’t be exposed under harsh sunlight.

To get up there is challenging, but moving down is another nightmare. To prevent dehydration worsen, I had to stopped very often and rest under the shade, waiting for body to cool off to proceed. Facing down to see the height was so demotivating, I relied on the energy of desire for survival and back in one piece. Later the elder villager told me that the spirit didn’t permit me to climb. Somehow I had started climbing before he managed to bring me this message. They also said it would rain for 2 days if someone conquered the mountain, and it did rain heavilt later. Don’t know if these are true. Anyway, this shows that the locals strongly believe there are spirits living in Batu Punggul. 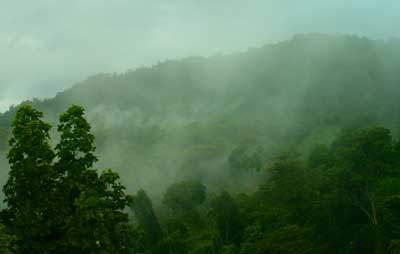 Don’t worry. I am ok. Though I didn’t conquer Batu Punggul, at least I won’t regret for not trying. The next morning when I waked up for work, I found that the force of gravity has tripped. Driving a small car was like driving a 16-ton truck. I have uploaded all the photos of this trip. Hope you will like the photos that I “risked” my life to take.