We reached the foothill of Batu Punggul after 10 minutes of boat ride. We walked and climbed slowly uphill. Probably due to the rainy season, the forest floor was wet and the surrounding air was humid. At the beginning of the trail, I saw a few ground leeches fully extended their slimy and elastic bodies to the air, wiggling in excitement. But they were no longer a concern when we moved further away from the river side. I wished I could spend more time in this dense jungle coz you would find rafflesia here (biggest flower in the world). 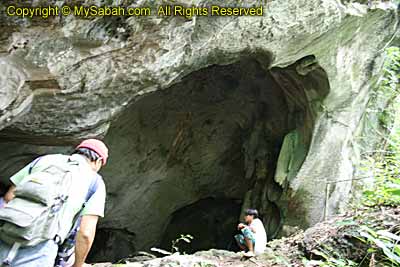 After 15 minutes of walking, we saw the entrance of a cave. This cave may have existed for thousands of years and created by limestone erosion. It is quite a big and deep cave. You can walk straight to the end without climbing up and down. 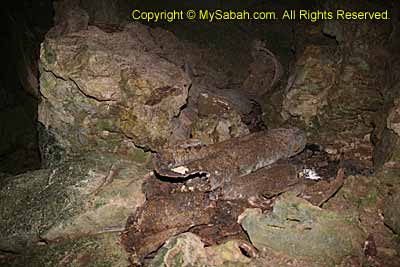 There is a broken coffin of an ancestor near the entrance. Too bad it was not preserved properly and I wonder how it looked. But this tells us there were people lived here before. FYI, there is another Batu Tinahas about 20 minutes walk away from Batu Punggul. It has more complex (and dangerous!) cave system, which may interest hardcore climbers.

About 10 Meters inside is a low opening. I had to lower my body to go continue. It was very dark so I just followed the light of people in front of me. I heard a few bats flapping their wings flying near me. The air was getting stuffy, with smell of amonia came from the bat guan.

Then I entered a space as big as a hall. I could see light coming from the holes on top. According to the legend, Batu Punggul is a fossilized longhouse, so this cave is probably its rooms. A old monument-like object (photo at right below) was built to mark the territory of the past residents. In the dark, I was sure that I saw a white and blur figure walked into this pile of rocks, but nobdoy would believe what I’ve seen. 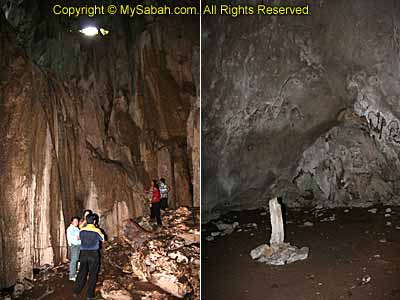 We only wandering in the cave for 10 minutes then we moved on. You see. It was such a rush. I really had no time to explore this place in detail, not to mention setting up a tripod to shoot better photos. Anyway, I still took a lot of photos and I will show you the photo gallery tomorrow. 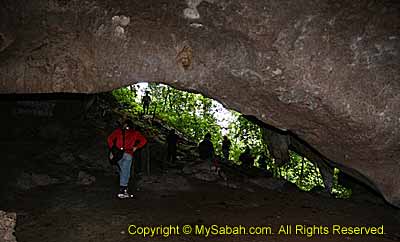 Bird nest is no longer available in this cave. Very likely the nests were over-harvested, before the broods had a chance to grow and reproduce. However, the interesting rock formation inside is already worth a visit. 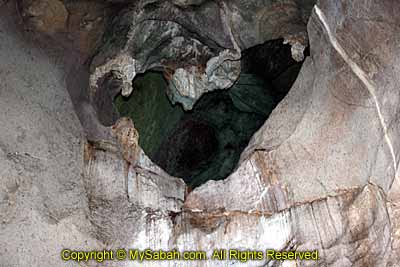 Haha… a heart-shaped hole on top. But this place is not romantic at all. The locals told us that in the very old day, some people dragged the women to this cave, rapped and killed them. I might have just seen one of the spirits lingering in this cave. At this point, the journey was fun until I climbed Batu Punggul.