Pom-Pom Island is a relatively new destination compared to other islands such as Sipadan and Mabul in Semporna, Sabah. Few people know that Tun Sakaran Marine Park (TSMP), also known as Semporna Islands Park, is the most reachable from Pom-Pom. In fact, TSMP is currently the biggest marine park of Malaysia and has richer marine ecology and biodiversity than Sipadan in terms of macro lives, many new species wait to be named and discovered.

Pom-Pom Island is 45-minute by boat from jetty of Semporna town. There are two accommodations on Pom-Pom. I was going to Pom-Pom Island Resort, the one which operates in environment-friendly manner. Without any fishing village and island residents, tourists enjoy more privacy on Pom-Pom. Don’t confuse Pom-Pom with another island named Bum-Bum. 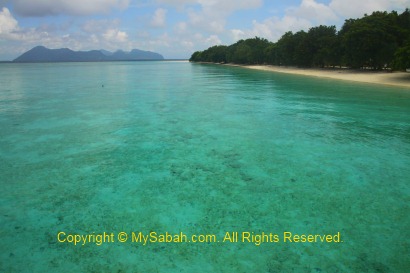 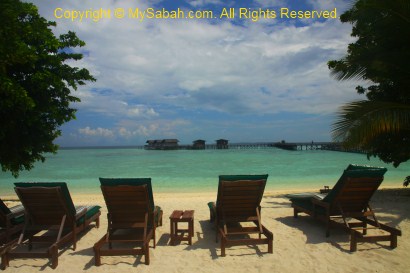 The white sandy beach and crystal clear sea are as spectacular as other islands in Celebes Sea. Under the hot tropical sun, everyone just can’t wait to jump into sea. We even saw lion fishes and many other fishes under the jetty. To say it in a tacky way, Pom-Pom looks like the picture in dream holiday ad. Visitors can swim, dive, snorkel and kayak around the island. 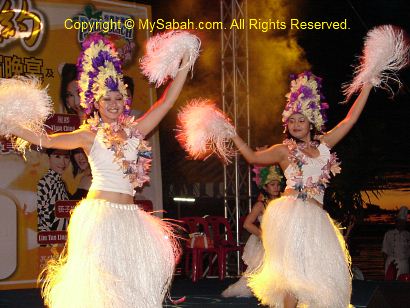 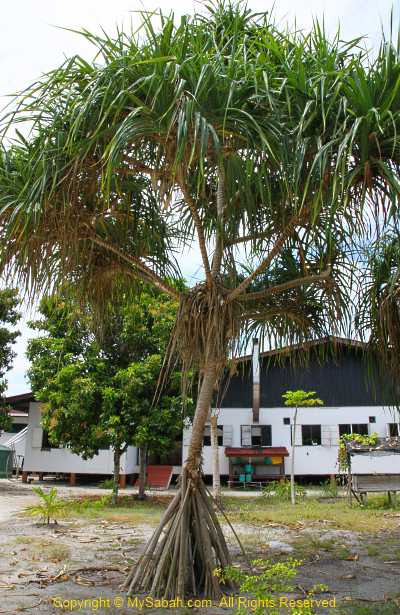 Actually Pom-Pom gets its name from the “Pom-Pom” tree (photo above), which is abundant on the island. 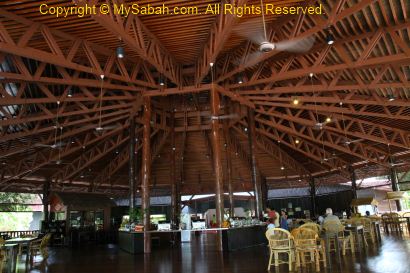 We checked in at their activity hall and restaurant (photo above). Welcoming drink was served (but no dancing Pom-Pom girls). It’s very nice that they sent our heavy luggage to our chalet with mini-tractor. I’ve been hearing positive feedback about the excellent service of Pom-Pom. Basically they take care of everything, so you are worry-free. They can even pick you up at Tawau Airport. 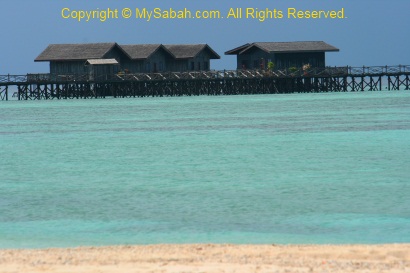 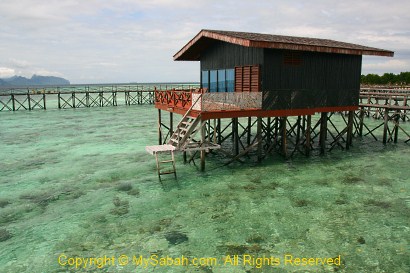 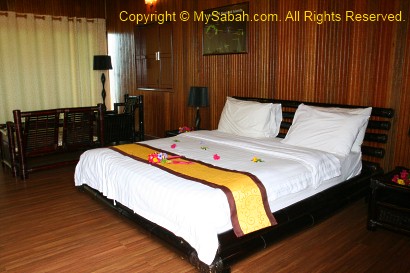 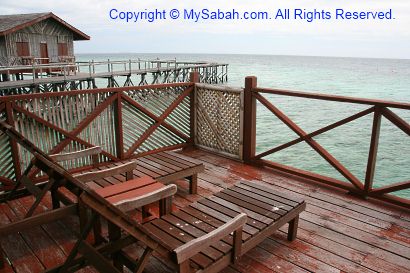 Of course the most luxurious chalet is the Water Villa built on the sea, and of course I can’t afford it. Anyway, I was busybody a bit and took a few photos of Water Villa (see 4 photos above).

I remember an incident that a hotel put me and my male colleague in a room with honeymoon setting. There is only a transparent glass between the room and bathroom, so I can see what my roommate doing in toilet. I am not that “open-minded”, so I requested the hotel to give us a “normal” room. Well, even if sharing room with wife, I don’t think it’s romantic to see her wiping her butt after doing number 1? 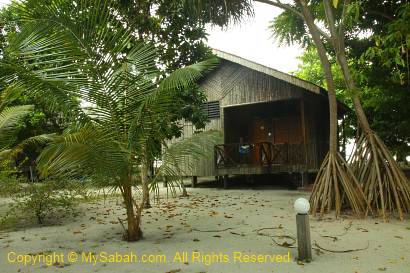 Though I stayed in Beach Villa (photo above), it’s already a 5-star lodging to me. Yes, the chalet has electricity, hot shower, light, fans and air-conditioning, and the room is spacious. 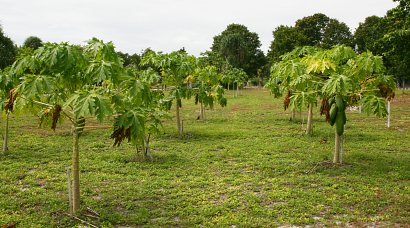 Pom-Pom is a small island that needs only 40 minutes to walk one round, but it’s big enough to have the soil to plant fruits such as Papaya and Dragon Fruit. After sunset, a large number of fruit bats (flying fox) will fly to this island to enjoy the fruits. The big bats are just everywhere after dusk. By the way, they have jogging and cycling tracks on the island.

I went for a bird-watching hunt around the island. The sighting of Barred Rail is reported on this island. This bird species is common in Philippines but it is only recently spotted and added to the list of birds found in Sabah. I was told that it likes to wander in the grass near the fruit garden, but too bad I didn’t see it. I saw other birds such as sunbirds and kingfisher.

You can find a sense of humor in many little things on the island.. 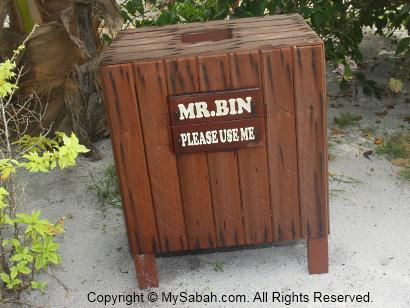 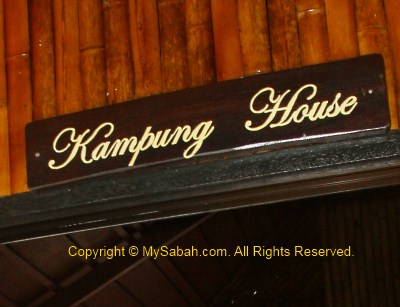 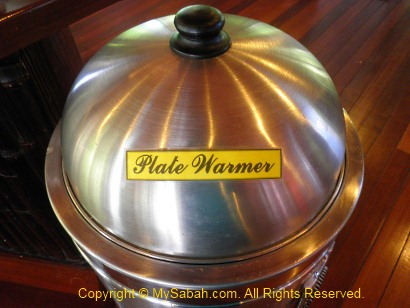 OMG, a Plate Warmer? This is the first plate warmer I see in Sabah. I love food to be served on warm plate. One thing that Sabah “kopitiam” (Malaysian coffee shop) always make me mildly pissed off is when they give me the plate and spoon that are still wet. I think it is kind of disgusting. 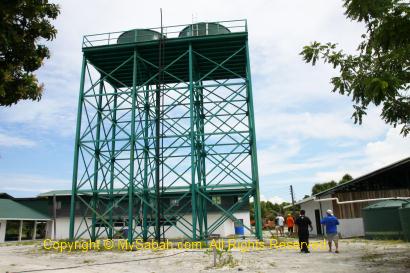 Pom-Pom Island Resort also invests on reverse osmosis (R.O.) plant to use rainwater. It is the only island in Sabah employs such green technology. They also plan to use wind energy in future. 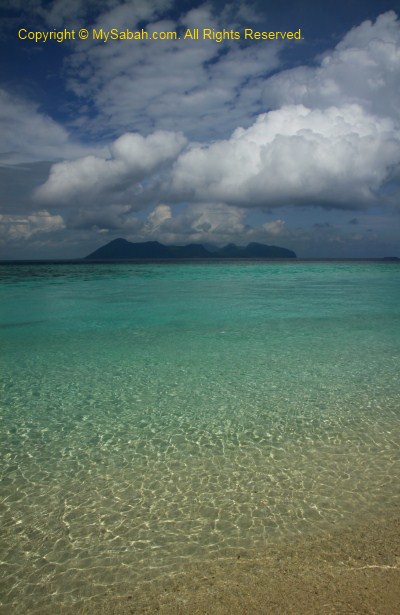 From Pom-Pom, you can clearly see Bohey Dulang, one of the islands of Semporna Islands Park. 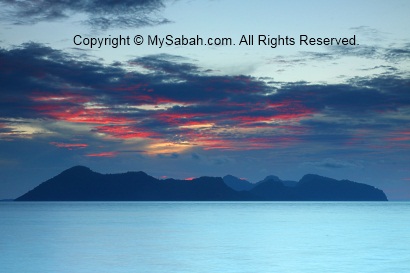 According to the legend, a notorious Sultan of South Philippines eyed on Arung Salamiah, a beautiful princess lived on Bum-Bum Island, so her parents hid her on Bohey Dulang island. She vanished few days later and people believe that she was hidden by the spirits on the island and turned into fairy. Locals say they could hear her singing and her dog barking during full moon, and even occasionally see her walking on the island. 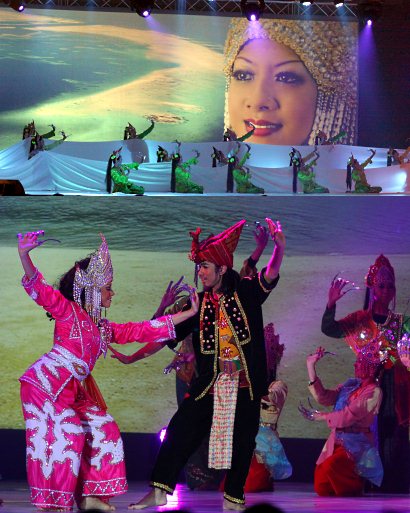 The romantic story of Arung Salamiah was even played in Sabah Fest 2010. 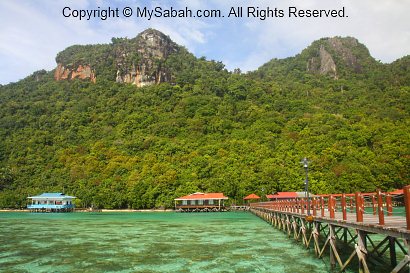 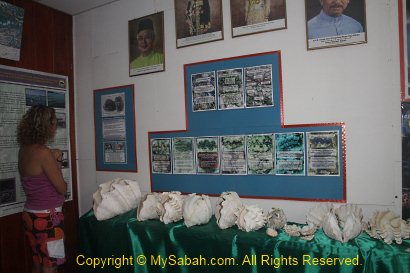 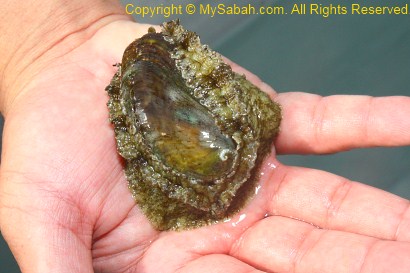 We also checked out the cultivation of abalone on the island. The species of our abalone is relatively smaller.

Our initial itinerary included a 30 to 45 minutes trekking up to the high point of Bohey Dulang (probably Salamiah stood on this hill before?), to get a bird eye view of Tun Sakaran Marine Park. Due to time constraint, we had to cancel the plan, too bad, next time then.

Later Pom-Pom sent us to Mantabuan Island for snorkeling. Being one of the islands of bio-diversified Semporna Islands Park, we saw so much in only 8 Meters of depth! Luckily coral bleaching does not affect the cooler Celebes Sea of Semporna, so the corals are in great shape. In merely 1 hour of snorkeling, we saw stack horn, brain corals, blue corals, lettuce corals, thorns of stars, huge sea cucumbers, puffer fish, crocodile fishes and 3 Green and Hawsbill Turtles!!! I was told by my friends that they also spotted turtle when they snorkel near the jetty of Pom-Pom in next morning. A scuba diver also said that she found 13 turtles in the sea in front of the jetty. 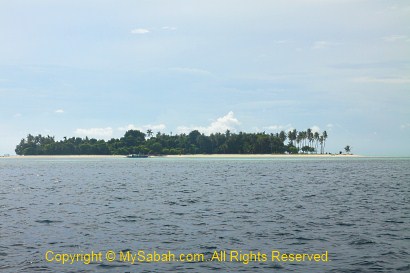 The sea current was not strong and the visibility was about 9 Meters. To see more, you can join scuba diving to see the precious black corals in deeper water. It’s about RM365 (USD$110) for 2 boat dives, permit fee and rental of dive equipments. Pom-Pom Island Resort has a dive center.

Another feature of Pom-Pom is the night patrol for sighting of turtle laying eggs. The staffs of Pom-Pom were trained as the wildlife warden, so they know the right steps and measures on conservation of sea turtles. The nesting records will be submitted to WWF and Sabah Wildlife Department. The guests were offered a night walk with the guides around 8pm. 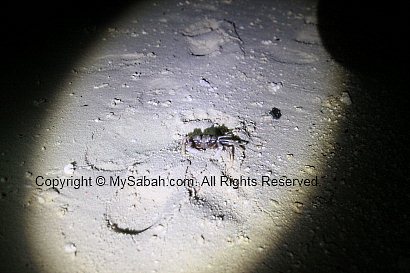 No turtle nest found during my stay. I only saw a ghost crab on the beach. The luck was not with us that night. 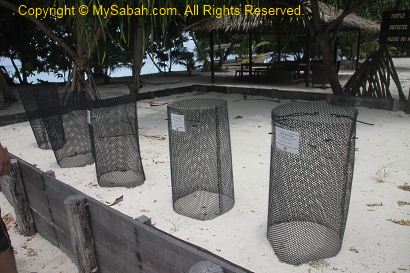 If any turtle nests on Pom-Pom, for better survival rate, the staffs will collect the eggs and move them to a protected turtle hatchery next to the dive center. The eggs will hatch after 2 months and the baby turtles will be released back to the sea. The staff (Sally) told us the number of eggs of Green Turtles and Hawsbill Turtles are nearly equal. FYI, you can sponsor the nest. 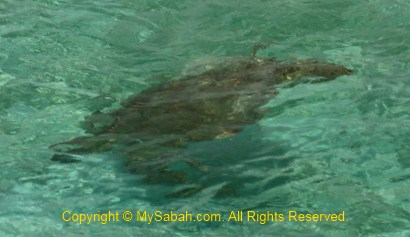 Before we departed on second day, two turtles showed up near the jetty, as if they were saying goodbye to us.

To know more about Pom-Pom Island, you may visit their website at:
http://pompomisland.com
They also have an interesting and updated blog.