A car accident always causes traffic jam on the road of Sabah because many cars will slow down to copy the car plate number for buying “4D”. 4D means 4-digit lottery games (also known as Cash 4, Pick 4, and Play 4 overseas. Local Chinese calls it “??”), the favorite lottery type of Sabah people. You just select a 4-digit number from 0000 to 9999 then bet on it. Though most Malaysians hate mathematics class, 4D is the coolest number game for us. 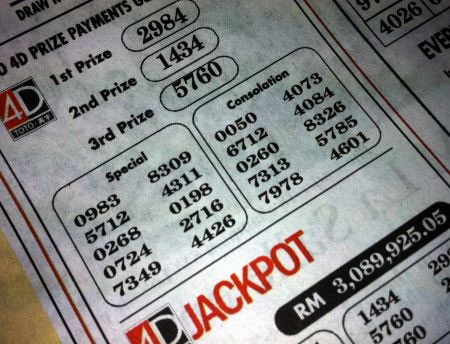 Yes, we all knows that the chance of winning is slim. More likely it’s money wasted but somehow it’s a nice form of mental entertainment, and hey, for RM1.15, you can’t even buy a coke, so it’s not really a big lost. In many cases, we will shout at the result in delight “OH XYZ, I only miss by one number!” and smile to one another, as if we are one step closer to our dream. Some don’t play lottery and say “not buying is winning”. Well, if you never try, for sure the next million-dollar jackpot winner is never you. “No try No luck”.

Sabahans are so obsessed with 4D that if you tell them, “I saw a ghost last night.” ALL of us will reply spontaneously, “Did you ask him for 4D number?” So funny.. Anyway, some gamblers do summon the ghost for numbers. 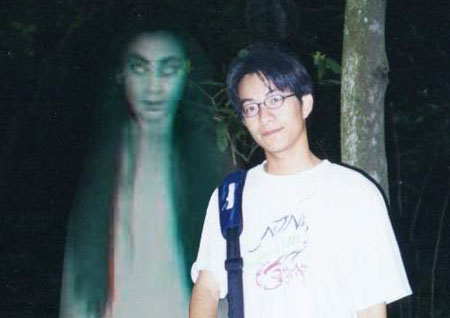 Would you ask a ghost for lottery number?

For unknown reason, Chinese thinks that windfall is controlled by spiritual world. If your luck comes, a hidden force will hint you via different channels, for example, plate number of a car in accident, numbers appear in your dream, and any number shown up in unusual occasion.

When I was in Beaufort town, the locals told me that there is an amazing “Lottery Rock” (Chinese calls it “???”) that answers the prayer of gamblers, and some of them really won lottery. Based on very limited info, I tried to look for this rock which is located between Beaufort and Sipitang. After asking two villagers during the search, finally I found it a few KM before the junction to Weston town. 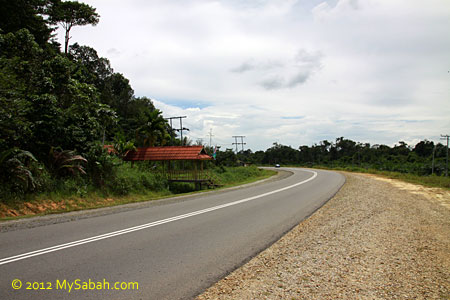 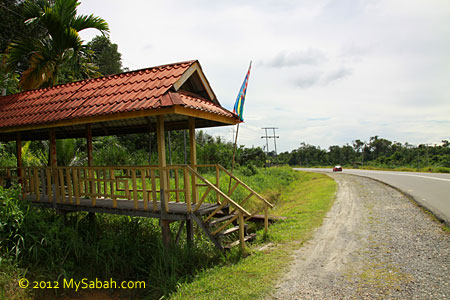 FYI, this rock is about 27 Kilometers (KM) away from Beaufort. When you head to Sipitang from Beaufort, just pay attention at the left side of the road after you pass by SK Maraba school and see the “25 Sipitang” signage. You will see a boardwalk shortly, like photos above.

Below is the location map of its exact location: 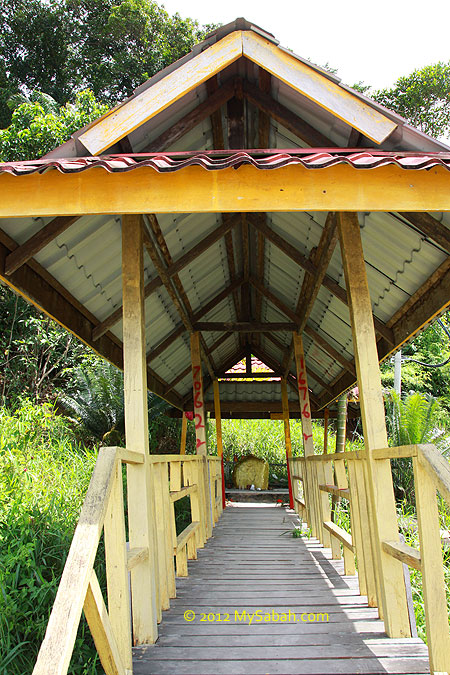 The shaded boardwalk will lead you to the golden Lottery Rock. This is an impressive big structure for an “unnamed” god. Even the God of Earth usually gets a 2×2 feet altar. To repay Lottery Rock for helping them to win lottery, the gamblers build wooden shelter, boardwalk, cement foundation, floor tiles, etc. for it. 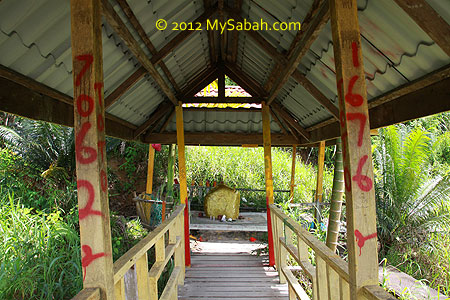 I started to see scribbling of numbers the moment I walked in. 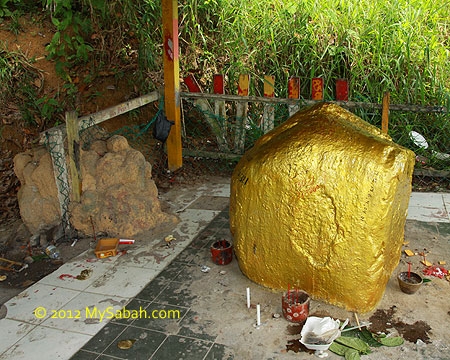 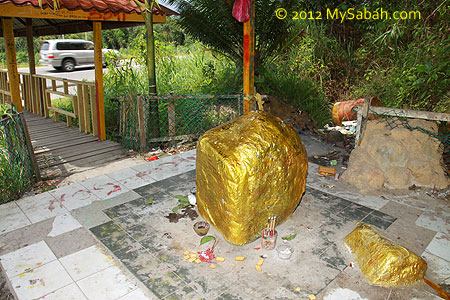 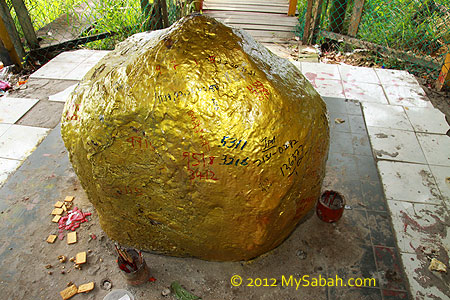 They even paint the Lottery Rock with shiny golden paint, so don’t get mistaken that it’s a gold rock ok, LOL. 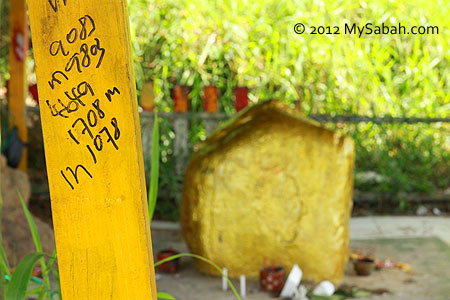 Got any lucky number in mind? Just write it and make a wish. 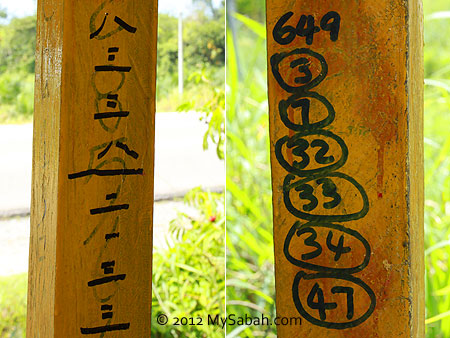 Don’t limit yourself to 4D numbers. You may try jackpot numbers too. I guess Lottery Rock can read numbers in Chinese? 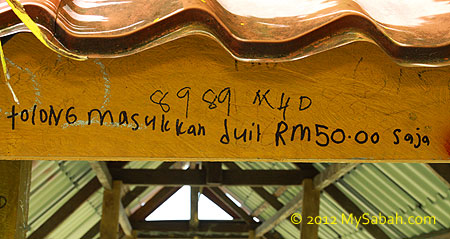 Since Lottery Rock has magical power, I believe it can understand your request in Malay language too. 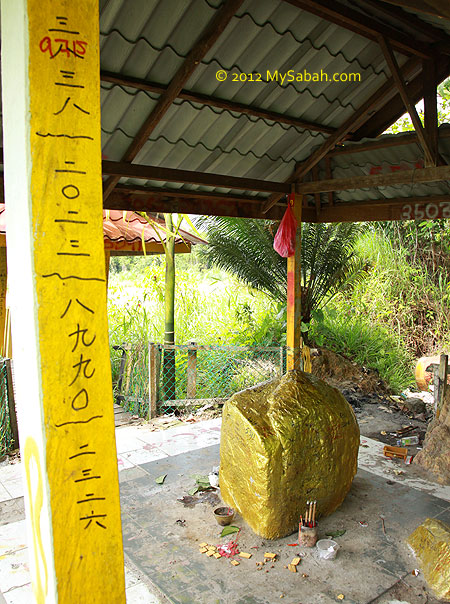 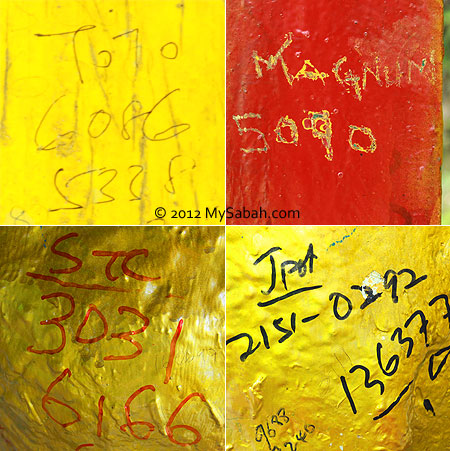 You may see words like TOTO, Magnum, Lotto88 and STC (Sandakan Turf Club). These are the names of lottery companies. To make the job of Lottery Rock easier, it’s nice that some specified the company and even the draw date. Otherwise you will have to buy the same number from 4 companies, just to be safe. 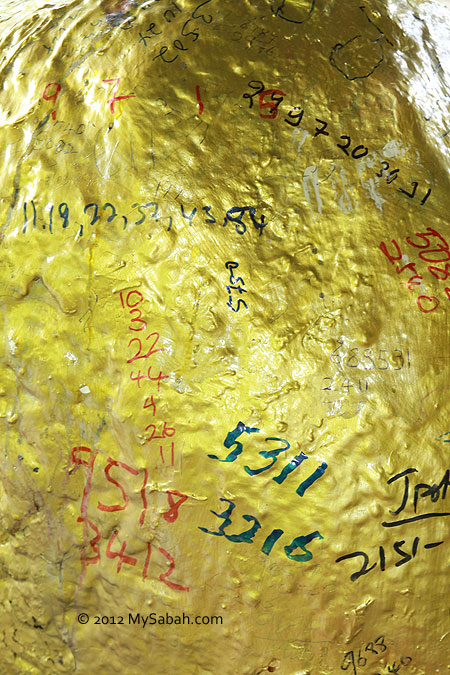 The surface of Lottery Rock is full of 4D, 6D and jackpot numbers. I was told that whenever someone win big prize, he/she will repaint the rock with different color. When the rock surface is out of space, people will write the numbers everywhere in the hut. Do take note that if you win the lottery but you break your promise to the rock, you will be hit by bad luck, in serious case, death. 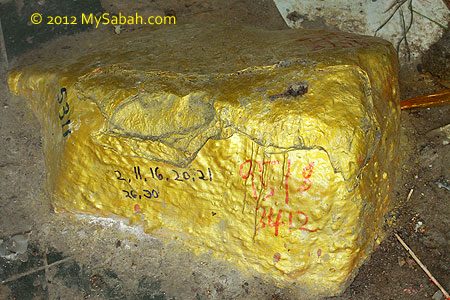 Even the small rock next to Lottery Rock also benefits from its fame. 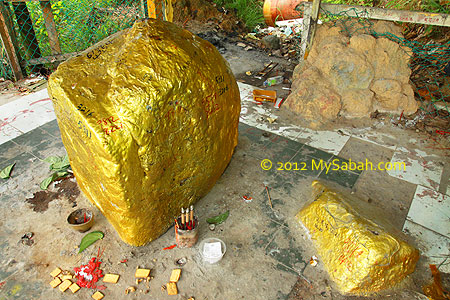 You may watch the short video below to take a tour:

When I was busy in photo-taking alone, I saw smoke coming from the rock and I heard something moving behind the rock. I felt a chill on my spine. 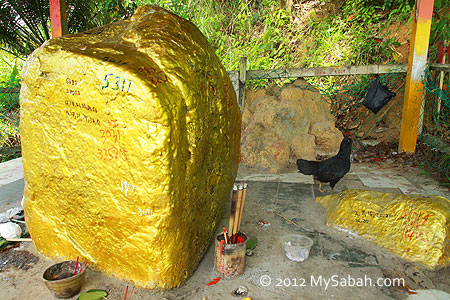 Phew… it was just a chicken behind the rock. 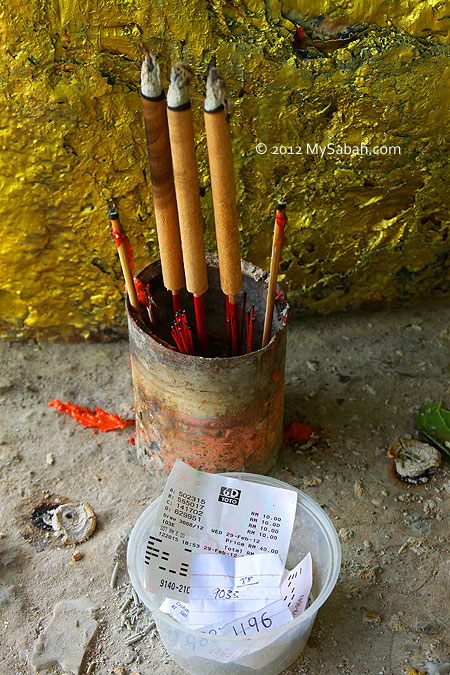 And the smoke was coming from the burning incense. Look at the 6D and 4D numbers in the container. 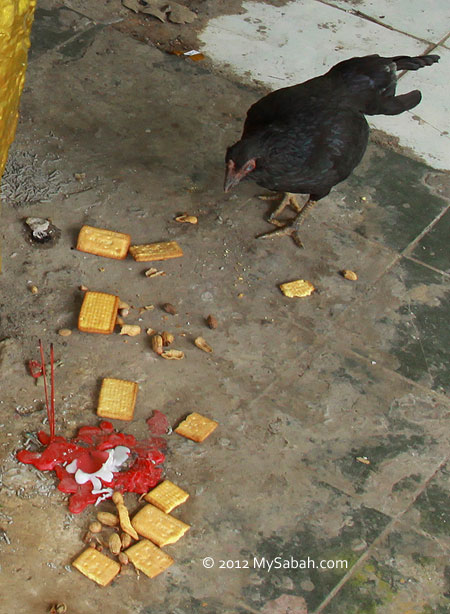 Actually the chicken was enjoying the biscuit, the offering left by the gambler for the rock. The left eye of this chicken is blind. 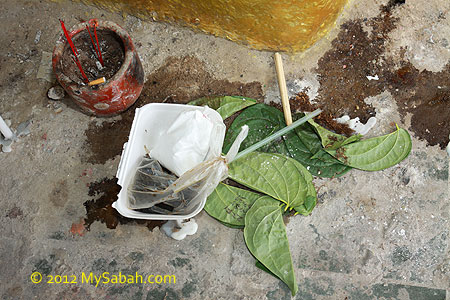 There are other offering such as betel nuts and leaves. 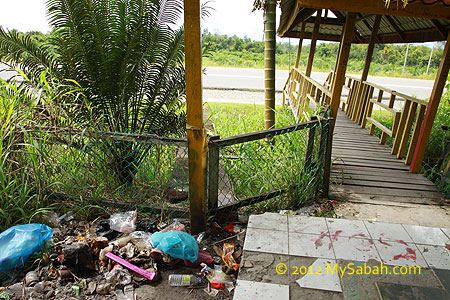 However, those offering accumulate and rot, turning this place into a smelly dumping ground. 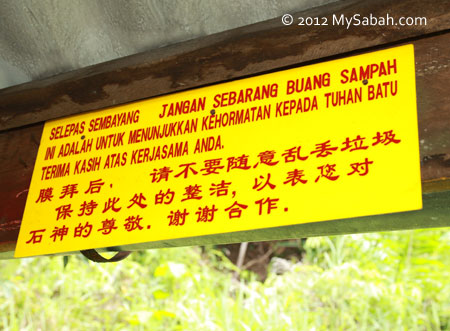 The notice sign reads, “To show your respect to the god of rock, please keep this place clean and don’t litter after worship. Thank you for your cooperation.” 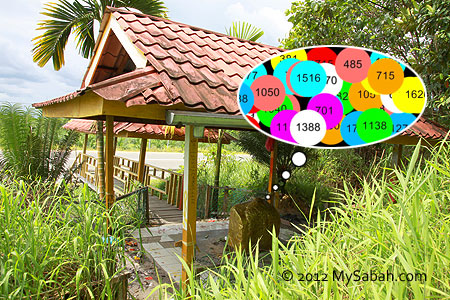 Ok, you might be curious, how did an ordinary rock become a popular magical rock?
Someone say, in the past, to construct the road between Beaufort and Sipitang, a group of workers moved away a rock that obstructed the way. However, later they discovered this rock came back to its original location. There are many taboo in construction industry, they believe this rock is occupied with spirit and shall not be moved. When a termite nest appeared next to it, people think this rock may bring wealth, so they prayed for winning lottery. And some did win, the rock becomes famous, so more and more people worship it until today. 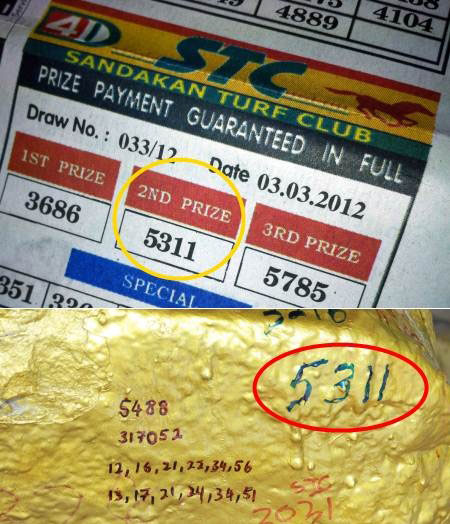 Though I was hanging there for less than an hour, there were already two cars stopped by to visit and worship this rock. One of them told me that a number “5311” written on the rock won 2nd prize, by his friend the previous day. That’s why he also comes here to worship the rock. I checked the newspaper and he was right. If you pay attention to all my photos above, you would have noticed that 5311 appears 4 times in different spots. 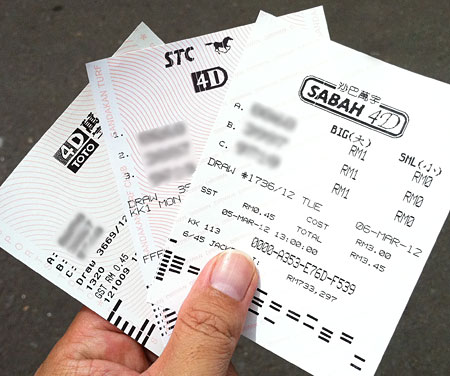 Ok, as I was there, why don’t I also try my luck? I bought lottery tickets for 3 numbers, I never win a lottery in my life, please wish me luck. XD