In making of this blog, I had walked over 50KM of jungle trail but never bitten by a leech (surprise!). Personally I am quite afraid of leech, as if it is a slimmy monster that can crawl into my brain. Anyway, my passion on photography still makes me to explore area potentially lurked with army of leeches. One day I was taking photo in Botanical Garden (behind Liwagu Restaurant) of Kinabalu Park. 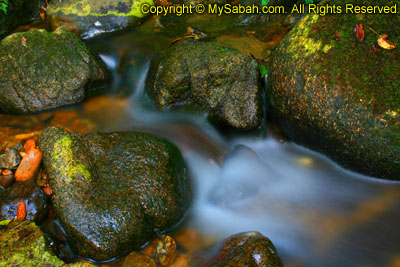 When I was busy shooting photo, I saw a leech crawling on the camera toward my eyes. Luckily I discovered it earlier, otherwise it would land on my eye. Quite a surprise coz I never expected to see leech in a garden where many people walking around. It is a small ground leech. I used a stick to relocate it to an open space for photo shooting.

The ground leech sensed my body heat and came to me in joy. As you can see in the photo below, it is a very tiny leech. Then I had a “crazy” idea of donating some blood to it. My friends probably thought that I was nut.

Even though leech scares me, I know it can do very very little harm to me. I decide to overcome my leech-phobia by letting it to bite me. I placed it on my arm. It crawled a bit then stopped. When I saw its head turned into pointy shape, I knew it was looking for sucking point.

The leech bite was less painful than a mosquito bite. In fact, I didn’t feel it. I was curious how much blood it could take, so I put a 50 cent coin next to it for comparison. In 10 minutes, its body size doubled.

After 15 minutes, its size tripled and showed no sign of quitting its dinner. I wanted to go for my dinner, so I just detached it with finger. It was very easy to be removed (probably it is small). Only a tiny wound left on my arm.

During blood sucking, the leech released a chemical that prevented my blood from clotting. The leech was gone, but my wound kept on bleeding for 2 hours. Imagine if you are bitten by 10 leeches, the mess they left behind will be quite a “scary” view, though it doesn’t hurt at all. I heard that the cigarette ash can stop the bleeding. 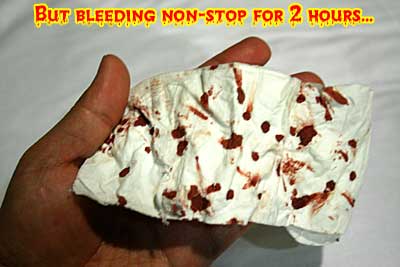