Two years ago, I saw a tiny flying fauna moving super-fast from flower to flower to collect nectar. You can watch the video below to get an idea how fast it is:

Though it only showed up for a few seconds, from its body as small as a baby finger and the way it hovered, I was pretty sure that it was a humming bird. However, all the bird guides I met said the same thing, “No way! Sabah has no humming bird. Probably you saw a sun bird.” I was kind of upset that nobody believed me, so I wanted to take the photo of the humming bird to prove them wrong. 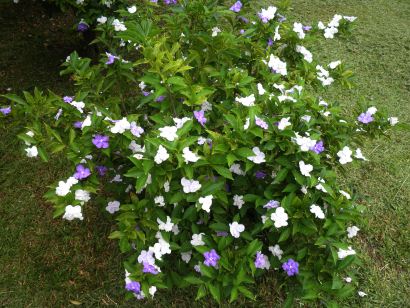 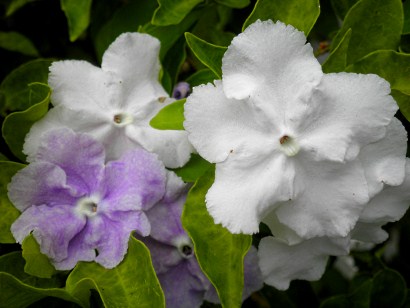 However, I didn’t see the bird again for next few years so I almost forgot about this. Then the blossom jasmine flowers in my garden attracted the “old friend” again. My mom saw it first because she water the flowers during dusk. When I was having my dinner around 6:30pm in the following day, my sibling told me that the humming bird was around again. 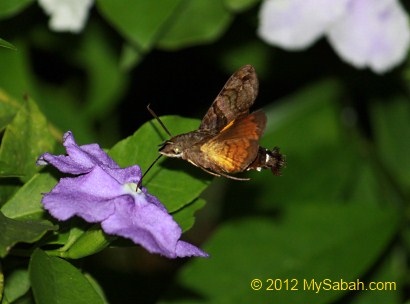 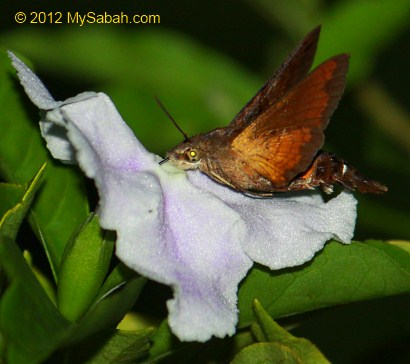 Quickly I stopped eating and grabbed a camera to shoot the humming bird. And to my surprise, there were 3 or 4 of them collecting nectar. When they fly pass me, I can even hear the high-speed flapping wings. 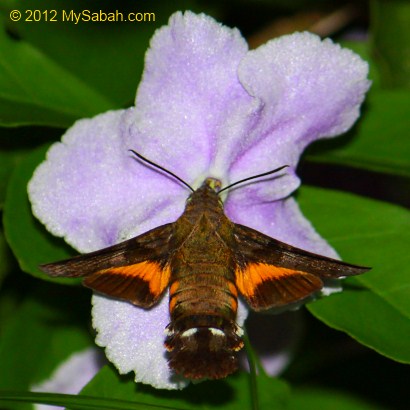 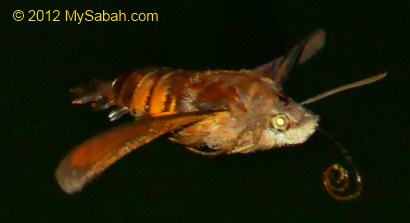 They fly really fast but I was still able to take some photos. However, when I zoom into these photos for closer look, I find that they are not birds! With a pair of antenna and a long proboscis, I can tell that they are moth. 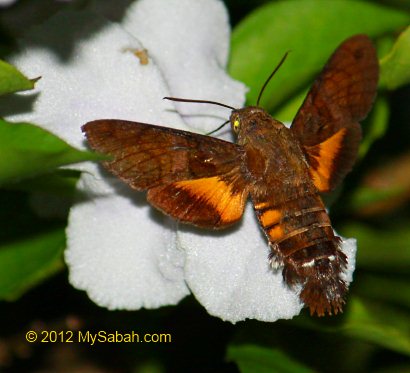 To find out what they are, I search the Internet and learn that they are Hummingbird Hawk Moth (species: Macroglossum stellatarum), a moth that looks remarkably like a humming bird while feeding on flowers and always mistaken as a hummingbird. 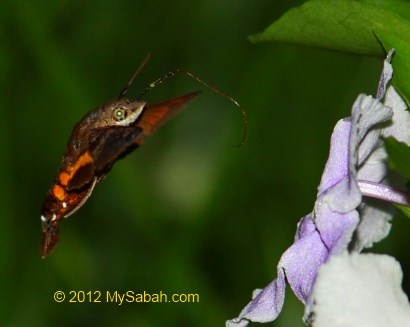 Humming Bird Hawk-Moth is common in Northern Hemisphere regions such as Japan and Europe. There is very limited documentation of this insect in Malaysia so I’m not sure how widespread they are in Sabah. Though it is not the humming bird that I has been looking for, I think that it’s still an extraordinary bug. The wings of Humming-bird Hawk Moth can beat at an incredible speed of 70 – 80 times per second, which makes audible humming sound and allows them to hover in the same way real hummingbirds do.

Did you see it in your garden too? Please share with me.

19 thoughts on “Humming Bird in Malaysia?”