Some animals and plant are so common in Sabah that you see them almost every day and think they are native species. No, they don’t belong here, at least for those listed below:

This adorable semiaquatic turtle entered Sabah as a favorite pet more than 20 years ago, and every kid during my days had a few of them in fish tanks. Red-eared sliders (Trachemys scripta elegans) originated from Southern United States and they get their name from the red patch of skin near their ears. 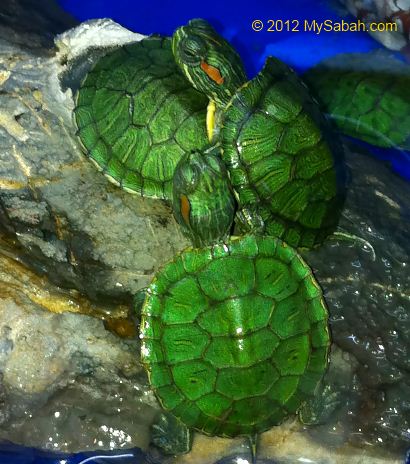 Some of them escape during flood, or some idiot owners released them to the wild. Though Red-eared Slider hasn’t become a major threat to our native aquatic ecology, their number in the wild is increasing and it’s not hard to spot them in the ponds. 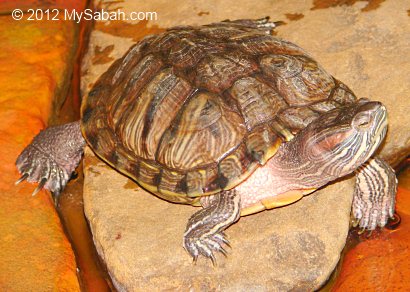 Recently, Wildlife Department passes a law which requires the pet traders and owners to get license for owning this turtle. Any violation will cost you a fine of RM20,000 to 50,000.

I don’t think weaver ants are citizen of Sabah too. I used to climb mango trees when I was a child. One day, the tree was infested with those aggressive reddish insects that delivered fierce bites. From there on, the tree is no longer my playground. Worst thing is, when you try to look at them closely, their abdomens can spit acidic chemicals into your eyes and cause a burning sensation. The Dayaks mix adult ants with their rice for flavoring, and they describe the taste as lemony and sour. Hmm.. sound good. 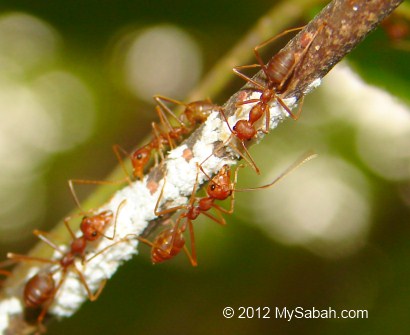 Weaver ants are used as a biological agent by Chinese farmers for pest control in orchards almost 1,700 years ago in China. I believe the early Chinese explorers and farmers brought in these weaver ants to their plantation in Sabah. These ants are nuisance because they are unfriendly to everything. If you see their nest on one tree, you can be sure that all other trees around will be colonized by them soon.

The locals call it “African Fish”. Tilapia is favorite breed for fish farm as it tastes good, easy to raise and they can survive in most adverse environment such as the polluted and low-oxygen drain. During flood, they escape to the river and reproduce. Now they are one of the most dominant fishes in freshwater of Sabah. 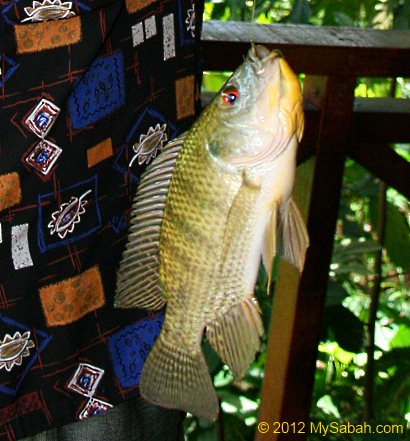 Research shows that tilapia is an invasive species that responsible for extinction of many native fish species. They are aggressive and consume the larvae and juvenile fish. 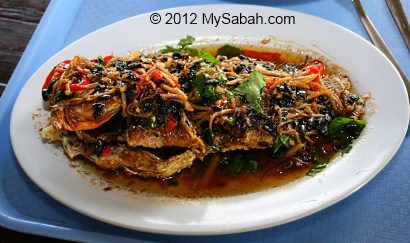 Therefore, I encourage you to catch and eat Tilapia in the wild. The meat of Tilapia from running stream is sweet and tender, unlike those living in the ponds of fish farm, which has the smell of soil.

Dandelion is a “poetic” flower and everyone loves to blow its seed-bearing parachute balls. But do you know that Dandelion is an invasive alien species that begins to dominate the Kinabalu Park by killing off native species (e.g. Orange Raspberry plants)? Sabah Parks has weeded out nearly two tonnes of dandelions from the Kinabalu Park but they still can’t totally eliminate them. 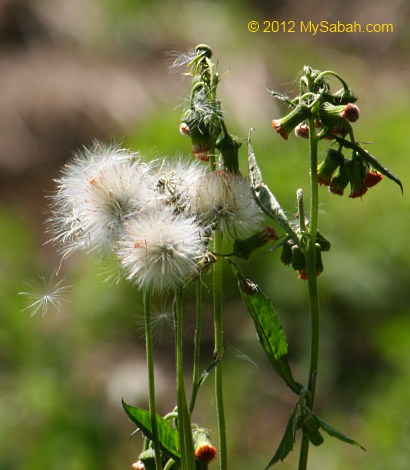 Sabah Parks first noticed this alien from Northern Hemisphere on the mountain some time in 1998 or 1999, and they believe it probably sneaked in from the shoes or bags of foreign tourists visiting Kinabalu Park more than a decade ago.

You would be dearly surprised to know that Eurasian Tree Sparrow, our “pipit”, is alien species. According to bird experts, this bird didn’t even exist in Borneo 50 years ago. People started to see them in 1964 and now they are everywhere. Someone calls it “Harris’ sparrow” but I don’t know why. 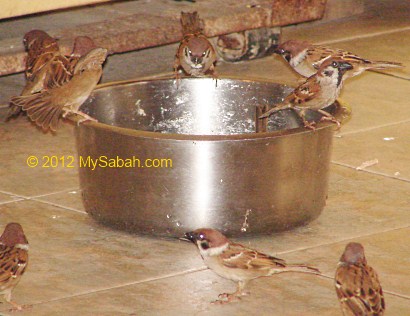 Eurasian Tree Sparrow are from Europe. They are not picky and more than happy to feed on any waste food left behind by others.

Rock pigeon is a domesticated bird from Europe, North Africa, and western Asia. 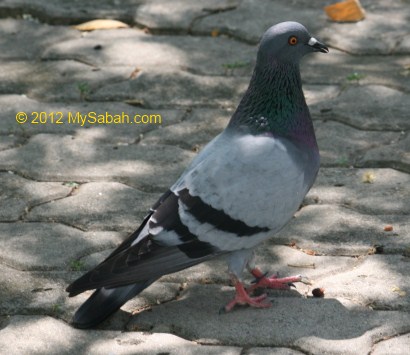 Nowadays they grow in large population and become the “feathered rat” of many cities all over the world. And they are known to spread brain fever. I had a schoolmate who died of this disease. 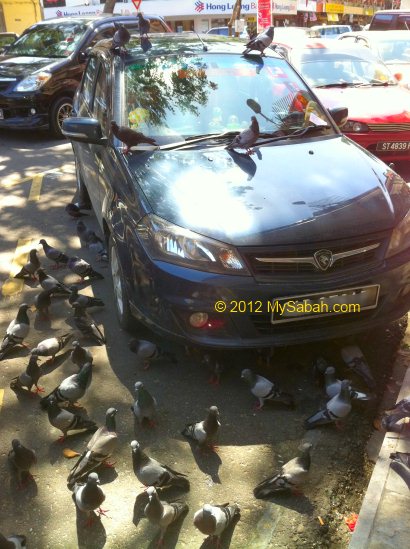 Many old people in Kota Kinabalu feed these city pest. Please DON’T do this! If you are old and lonely, go feed something else.. Pigeons don’t bring peace. They bring problem and disease if their number multiply in Sabah.

This big snail is listed as one of the top 100 invasive species in the world and a major headache to our farmers. My mom remember the old days they looked for these snails at night with torch light and always killed a full basket of them. If they don’t patrol, those snails could destroy all the vegetables in a night. We hate these snails so much that we crush them whenever we see them. Sometimes we drop a small pinch of salt on them and let them die slowly and painfully. 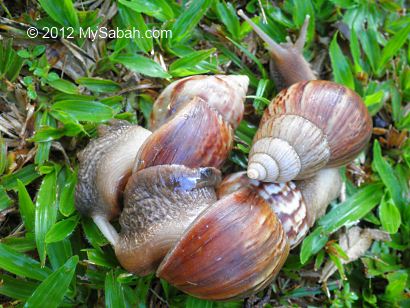 Giant African Land Snail was “imported” with crops from other country. In Africa, they are preyed by a bird species. However, they have no predator in Sabah, so they breeds like wild rabbit. My mom calls it “Japanese snail” and someone told her that the Japanese soldiers ate this snail during World War II. 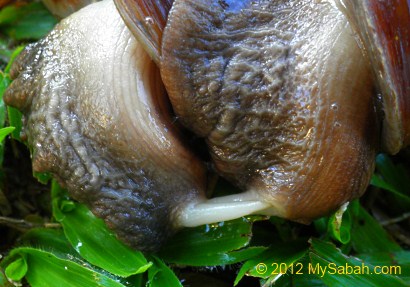 Above: land snails f*ck each other by injecting love darts. Giant African Land Snails are hermaphrodites with a full set of reproductive organs of both sexes.

However, the worst aliens of all, are those illegal human immigrants from our neighboring countries. In other countries, illegal immigrants would be jailed and even shot. In Sabah, our stupid government will award them with citizenship and the right to vote. Now there are probably nearly million of them in our land and the real Sabahans will become minority soon. The Sabah leaders always “pretend” to push federal government to resolve this issue. But after 20+ years, federal is not giving them a damn and nothing is done. The only way to resolve this problem is to vote for opposition in next election.

Design a Logo for Sabah

Supirak Island, an Island of Sorrow

2 thoughts on “Alien Species in Sabah”