According to Chinese belief, the gate of hell will “officially” open on Aug 26 this year. But the party has begun much earlier. We will see people burning paper money and incense everywhere. About ghost, Confucious said, “Respect them but stay away from them.” So don’t purposely step on the stuffs, as there might be spirit gathering around those spots. My another advice is – if you see, feel, or smell anything weird in this month, just ignore it totally, don’t say anything, and pretend you don’t sense it, unless you want to ask for 4D number lah.

We also believe that talking about ghost will attract them to come by, so we usually refer them as “Good Brothers” and avoid saying the word “Ghost”. I don’t own a pair of eyes that can see the spiritual world (luckily), but I had heard so many stories about them from my parents and friends. But I think I can “feel” their presence sometimes. Maybe I can share a few personal experience with you here. 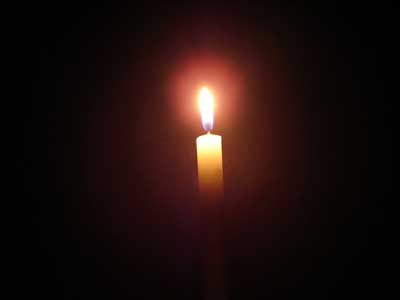 When I was about 10 years old, I followed my parents to visit my uncle and cousins who lived in Sandakan. His house was surrounded by dense wood, quite dark but cooling. The room that my family stayed had a window… If I opened the window, I could see a cemetery just hundred yard away. Being a child, I was not afraid of that. One evening, I was playing alone in the room, under dim light. My relatives and parents were all watching TV in the living room outside. I was sitting right under that window. Suddenly I felt that someone was behind me. It was a very chilly feeling. I turned my head and looked around, but I saw nobody else. Then the chill got stronger, I was freak out, ran out of my room and looked for my parents. That was really scary, though I didn’t see anything. That’s why I still can remember the feeling vividly until today. After 20 years, my mom told me something. She said, “Son… the house of your uncle was haunted. One day when I entered the room, I saw a big black shadow standing behind you, when you were playing alone with toys. When it saw me, it flyed out of the window next to you.” Eeekk… so geli… 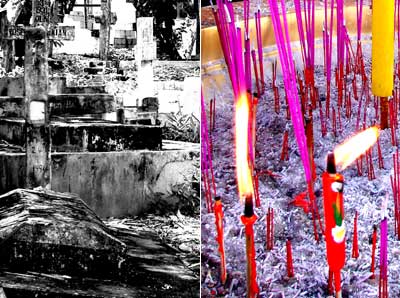 The second case was in my secondary school year. I was so interested in astronomy (crazy actually!), so I liked to watch stars. One night I waked up at 1AM to watch stars, coz the sky was clearer and the stars were brighter late at night. I remember I was looking for a comet. Then I saw a big yellow fire ball, with a long tail, flying over my head. It lasted for 5 or 6 seconds. I was so excited. I thought it was a shooting star. Many years later, in April this year, I was taking photos around 11PM in Kinabalu Park and I saw this “fire ball” again. This time it was quite far away, and it vanished after a few seconds, not enough time for me to pull out the camera to shoot. The older people would say this is the spirit of the death. Whenever it appears, that means someone dies nearby that area… 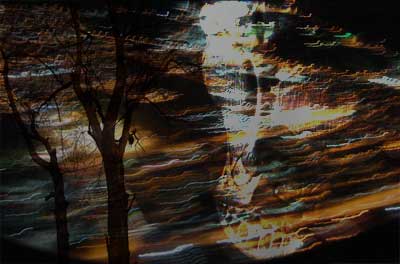 The third case was the time I studied in a college in Subang Jaya. I liked to study very late at night until 2, 3 AM, coz it was very queit. One night I was studying alone in the living room downstair. I left the door open to let fresh air came in. It was total darkness outside and everyone had fallen in sleep. That was nobody around, but suddenly I smelled very strong perfume, so strong that it was like a heavily make-up lady sitting next to me. I ran to my room as fast as a Olympic runner.

Fourth case, I was very hardworking and worked until 7 or 8pm every day for my first job. The whole building (Wisma Sabah) was almost empty and all the office was close at that time. My cubicle was very near to the pantry. I am sure that I heard someone walking and even coughing in the pantry. But everytime I went and checked the pantry, nobody there. This has happened a few times. My brother also worked there before, and he told me that someone called his name when he was alone in the office. One of my ex-colleagues even saw “it” sitting on the chair near the door, he was so scared to passby it, so he trapped in the office until morning. He is one of the “lucky” one who owns third eye.

Fortunately, I didn’t have any encounter like that again. I did see or sense something weird from time to time, but I just attributed it as my eyesight problem and discussed it. I slept in more than 10 hotels, when I was travelling around to take photos for MySabah.com. Quite amazing that I “survived.” I usually leave the light on, while sleeping in hotels. But there were a few times that the room upstair was very noisy, like somebody moved the furniture and wild kids running, BETWEEN 2AM and 4AM. I only told myself not to think too much, “It is not good brother… It is not good brother…”

Hope you are not reading this blog at night. If I have time, I will tell your more stories that I heard from others. More scary… I will only share the one that told by the “victims” themselves to me directly, as a real story will turn into another version totally different, after it has been passed on by a few mouths.

10 Best Souvenirs to Buy in Sabah