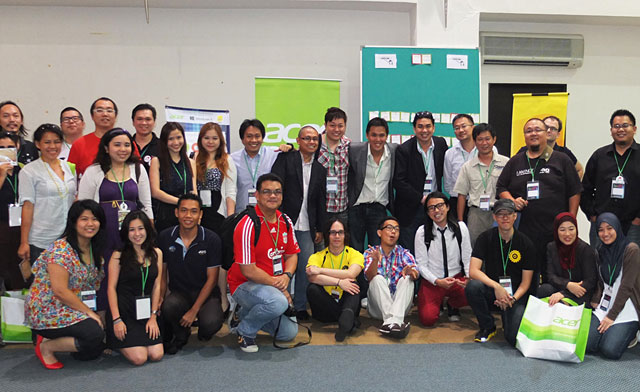 B2.0, an annual conference for blogging and micro-blogging communities of Borneo, is what I have been looking forward to. In fact, this is the 3rd time Borneo Colours and M.E Malaysia organizes this event. I remember I joined the 1st KK Bloggers Gathering in year 2007. After 5 years, blogging is not dead, instead, blog becomes even more powerful with the rise of Social Media and Mobile Devices. Now blogging is part of everyone’s life and no longer a hobby reserved to tech-savvy youngsters, and everyone is a blogger in some way. 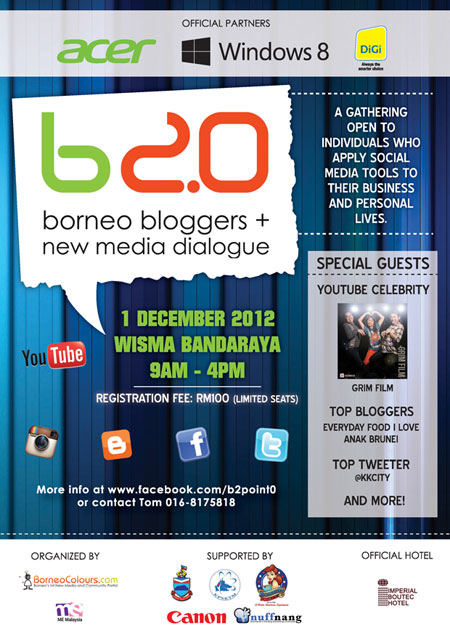 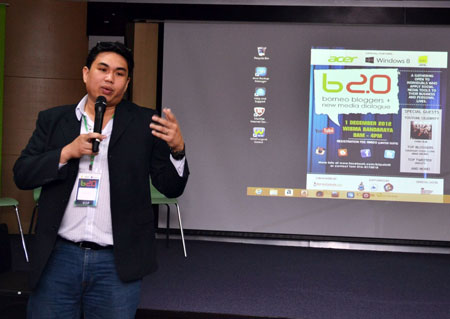 I’m a Generation-X approaching middle-age (LOL). I went through the era of fax and Internet. I wrote letters to keep a long-distance relationship. I read newspaper in breakfast. I valued human touch and didn’t understand why someone have more Facebook friends than real friends. I didn’t get it. 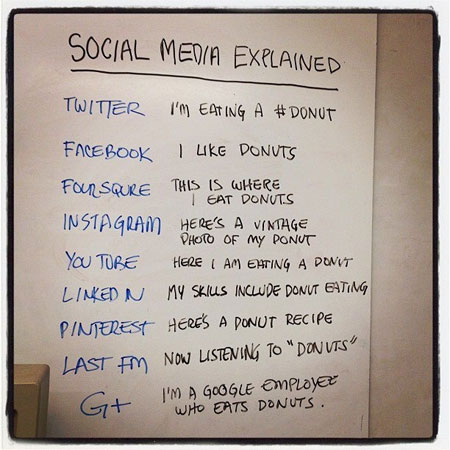 However, I became an advocate when my organization (Sabah Tourism Board) decided to reach more audiences by “Words of Mouth” marketing via Social Media. Then I started to witness the power of Social Media platform to complement traditional media, after Sabah Tourism entered Facebook, Twitter and Weibo (as China blocks Facebook). It’s astonishing to see how a post can go viral, getting hundreds, thousands of shares and likes within hour. Even my personal blog gained 30% more traffic after I made it more social media friendly.

The Rise of Social Media

Though I was invited as one of the special guests in B2.0, I came with a heart to learn, to share and to network. After the fun ice-breaking activity by Johan Amilin, we had our panel discussion on The Rise of Social Media. 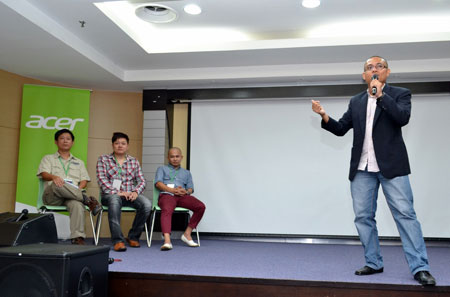 Pic: Guest panel of Rise of Social Media, MC by Jack. It’s me at the far left, trying to act cool, actually my palm sweated XD

I was sitting next to the very influential food blogger, Thanis Lim from Brunei, his honest review can cause lousy restaurants to close down, and the most active Sabah Twitter, Pajel @ KKCity, whom I personally call the spy of KK (Thanks for tweeting about road blocks bro :-p). 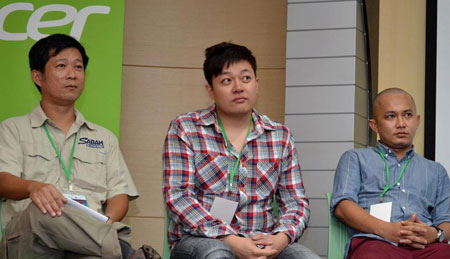 Pic: I looked so serious, next time I should smile more. Thanis was probably thinking of what’s for lunch.

We shared our experience on various topics such as self-moderation, making money and getting more exposure on blog and social media. I’m full of gratitude for the support from the following organisations, who give Borneo bloggers a stage: 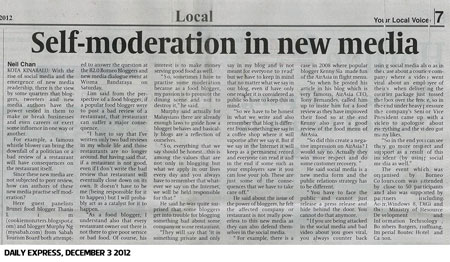 What we said were quoted quite extensively (including my broken English) in Daily Express on 3 Dec 2012. Oh My Manglish! *embarrassed* Thanks Neil for polishing up a bit on my part.

What was Not Being Said…

The panel discussion was short, so I couldn’t talk too long or I would hijack the whole session. :-p I hope the audiences got my points presented in summary form.

I have seen so many talented bloggers and vloggers in Sabah. For their creativity and achievement, they can make a very good living (and fame) in modern countries such as USA. However, in Sabah, it’s sad that most of us are only barely surviving. Doing things we are passionate about and earning good income is the dream of every bloggers. Unfortunately, very few can sustain a full-time blogging career.

Therefore, Bloggers can’t just sit there waiting for sponsorship and traffic to flow in, we have to reach out, and Social Media makes this easier. Sometimes we just need to be proactive and ASK. Below are a few advice to increase our expo$ure:-

Unless our blog has thousands of visitors per day, Pay-Per-Click Ad won’t be very promising. Even if the traffic of a good blog can be low, it attracts high-quality visitors who are more likely our target customers. With such advantage, you can sell your OWN product / service in your blog, whether you are a restaurant owner, eBook writer, wedding photographer, estate manager, IT consultant… Don’t be so obsessed with one-hit-wonder viral content or number of fans, they worth $0 if they are not your target market and won’t buy anything from you.

Special Guests of B2.0

I’m so glad to meet Jack, Monica and Angeline, the team behind Everyday Food I Love, a food blog that always makes me drooling. Besides, I also learnt a lot from the following cool speakers and special guests. 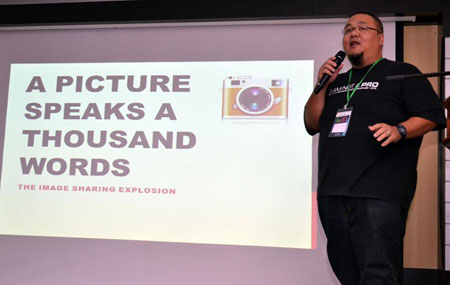 Very informative talk on Image Sharing Madness by Reeda Malik (AnakBrunei). I felt like an old man when he mentioned some image sharing apps that I never heard of, and when others kept nodding their heads when asked if they were users.

Reeda also played a video “The Stolen Scream” about a man who found his photograph was displayed everywhere without his knowledge.

My photos in my blog are also being “stolen” countless time. You will be surprised if I tell you who are those copycat… These million-dollar companies never thanked me, and they even removed the copyright stamp of my photos. When being caught, they would blame their poor designers who got no budget for image stock.

Next was the talk on Social Media Gamers by Tristan Lee Riven of Team Sprocket. 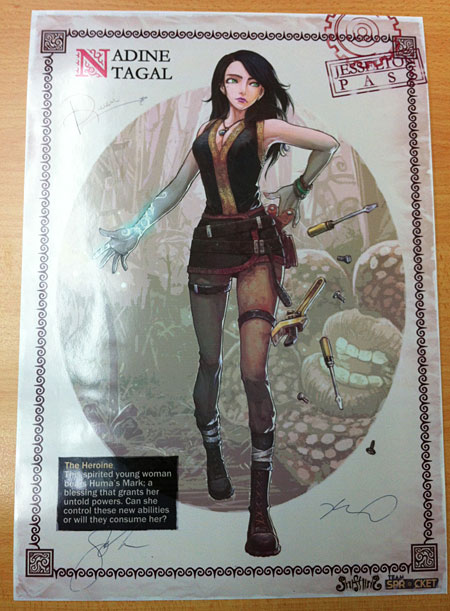 Team Sprocket is developing a new game “Shiftling” that will be released in 2014. Can’t wait.. I got a poster of the game with the autograph of the team members (Tristan, John and Minho). Does the dress look familiar? They use a lot of Borneo elements in the game design. 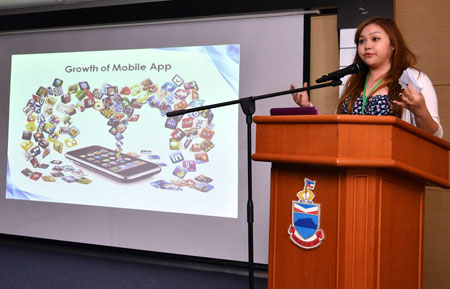 She rise a red flag in my mind when she said only 1% of mobile users read blog on mobile phone. For me, blog is the best platform to publish content, as it can accommodate large quantity of text, photos, video, etc., unlike social media which has short life-span and length limit. I’ll install their new NuffnangX app and see if that can help me to promote my blog on mobile devices. 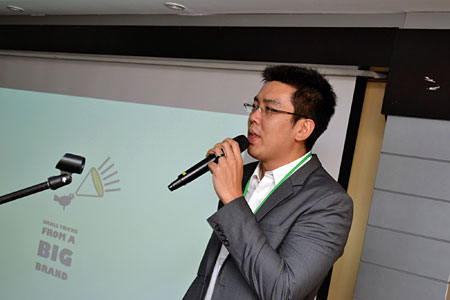 A thumb-up to Tai for his talk on In Support of Social Media, I totally agree with him that we should challenge the norm, the standard. Being conventional is just BORING.

Then he showed us a very funny video made for the Gila Internet Sales of DiGi.

It was so hilarious that I watched it again and again later at home. 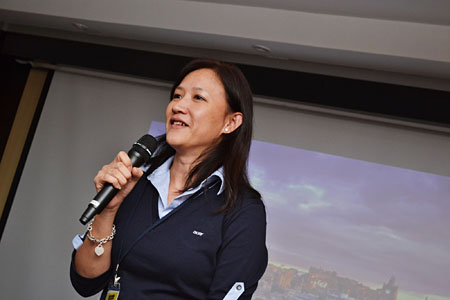 Kathleen Lee from Microsoft introduced new Acer laptops with touch-screen capability supported by Windows 8. Oh dear, NOW, should I get an Iconia tablet or DSLR as my Xmas gift? I want BOTH lah. 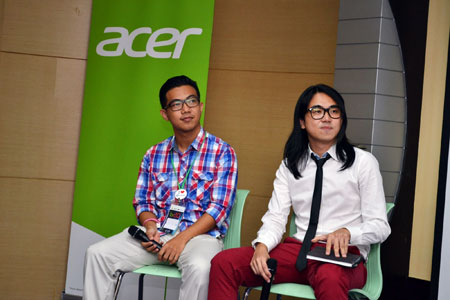 Moses Wong (Film Production Sabah) and Jared Lee (Grim Film) giving a talk on YouTube Generation & Social Media Unveiled. They are the people behind the viral video Sabah Hakka Style, which got over 800K hit. I’m so proud that Sabah has such talent.

And their short film “The Long Distance Relationship” was so touching that I saw a few guys wiped their tears after watching it. 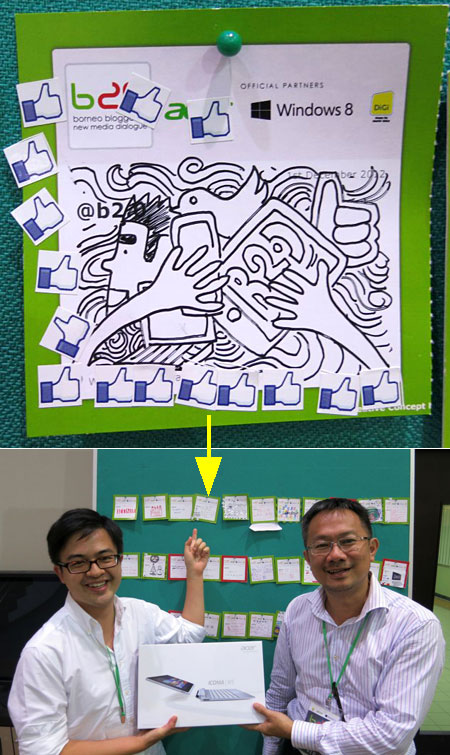 It was a day well-spent and I was really happy to be there. I guess the happiest blogger is Chan Hing Chin, who won an Acer Iconia tab for getting the most Likes for his creative entry. Congratulations!

Pic: One for the album. A group photo of B2.0 to end the convention.

See you Next Year! ðŸ™‚ Hope all bloggers will have more success stories and interesting experience to share next time.

6 thoughts on “Uncle in B2.0: Borneo Bloggers + New Media Dialogue”