Seeing the photo of “red ant” below, your first response would be “Stay away from it. It will bite you!” Most Malaysians had experienced the painful pinch of this aggressive red weaver ants, which are so commonly found on the trees. If you think so, you have been fooled by an ant-mimicking spider. It is a spider, NOT an ant. 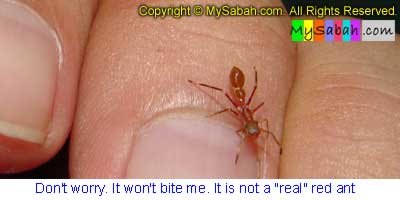 You will need sharp eyes and some luck to spot this type of red ant-mimicking spider. Look around the red weaver ant territory that has established for years. Instead of dating and hanging around with other red ants, this red spider would wander around ALONE nearby. Interestingly, ant-mimicking spiders only live near the type of ant that it looks alike. 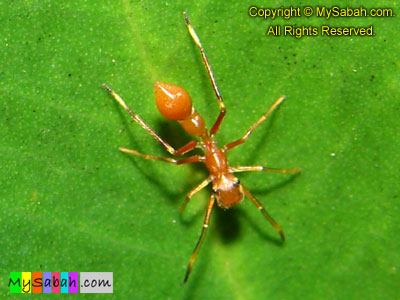 Below is a picture of the “real” red ants. Are you able to find the differences between them? 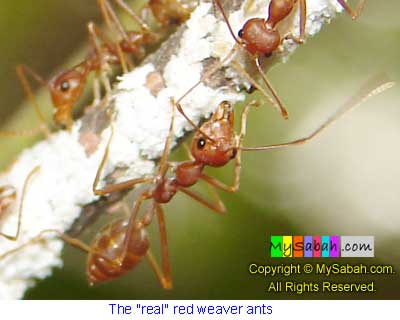 The pictures below shows how this spider uses its palps to fake the shape of ant jaw (mandible). Also note the big eyes of this spider. Nobody wants to move their faces close to the red weaver ants (if you don’t know why then try it. Hint: acid bullets), so this spider is rarely seen. 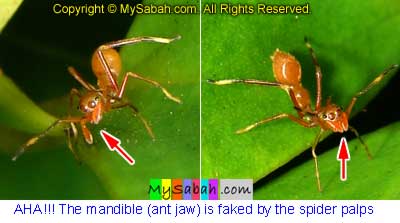 The ant-mimicking spider is not only look like ant. It also tries to act like an ant, to attempt to make predators back off. Spider has 8 legs and ant has only 6 legs. So how the ant-mimicking spider “hides” the extra 2 legs? The solution is simple. It just lift its 2 front legs on top of its head to fake a pair of ant antenna (and swing them up and down actively, just like an ant). Smart huh? 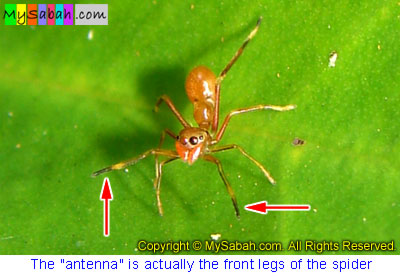 Still not convinced? I will always show them the strongest evident, if my friends still insist that it is an ant. Then I will enjoy watching their mouths open widely. Click Here to see how I make the spider exposes its true identity. 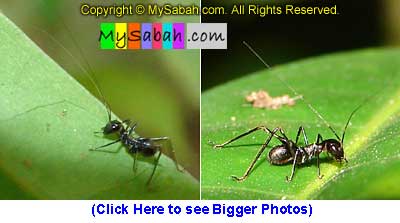 How to Start a Fire