“Killing you is as easy as killing an ant!” Many of you may have heard this familiar phrase in TV, movies and stories. One ant is weak, but a colony of ants is invincible and can kick our ass. Most predators don’t think messing with ants is such a wise idea. I was once stung by ant that has a stinger, and the awful pain with burning sensation still lives vividly in my memory.

Therefore, ant becomes an idol of bug’s world, and many bugs wish they are part of the ant gang. Even though they are not the ants, they can act like one and even look like one. This is known as Myrmecomorphy. Remember my blog about Ant-Mimicking Spider? I thought this spider had the most impressive ant disguise until I met the fellow below wandering in the forest ground of Tun Fuad Park. 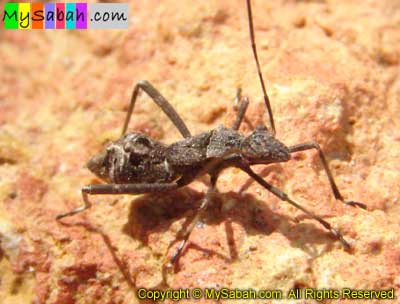 You would say, “isn’t it an ant?” This was what I thought too. It walks like ant and looks like ant. It caught my attention coz it stayed still and motionless when I came near it. This ant appeared to be too smart coz it tried to cheat me, and it also seemed to observe my movement. 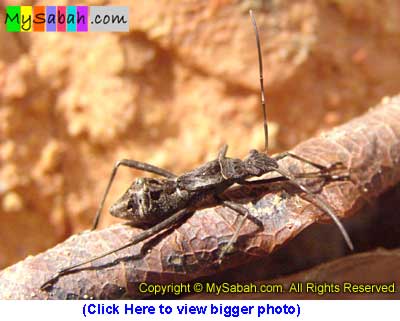 Until I left, I still didn’t know this was not a real ant. I took its pictures because I found the body structure of this ant was very strange. Return home, I opened the photos for closer look and found that it got something like a pair of small wings at its back (you can see it clearly if you click for the bigger photo below). 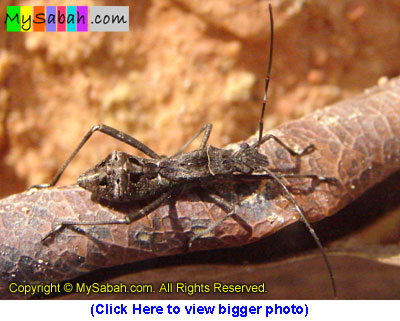 After comparing photos of 4 other ant species below, I am quite sure that I have seen another ant-mimic bug of Sabah. The antenna of real ants have a bend in the middle, but this bug doesn’t has any.

Real ant also has small waist that all girls wish to have. The waist of this bug is too fat. Other suspicious characteristics include the funny abdomen shape and absence of big jaws.

Later I did a search on the net. The closer match I could get is – this bug is a Beetle or Hemiptera. The amazing thing is – Ant-Mimic Bug only lives near the ants that they resemble to. For example, this bug is only found near the active area of grey ants that look like it. It will not try to mix with the red ants, black ants… somewhere else. How do they do that? They don’t even have a mirror… BTW, to find ant-mimic bug / spider, you need to look around the ant nest that has established for many years.

I believe this bug is the baby of the insect below: 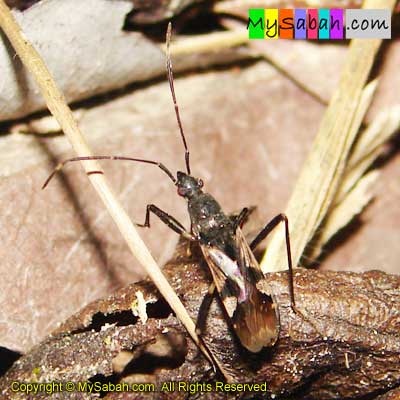