“A bay full of corals” is my first impression of Usukan Cove in Kota Belud district. In fact, the rich diversity and density of corals in Usukan Cove reminds me of Tunku Abdul Rahman Marine Park 30 years ago, the time when the corals were in pristine conditions and found in shallow water only a few feet away from the sandy beach, before they were spoiled by thousands of tourists nowadays… 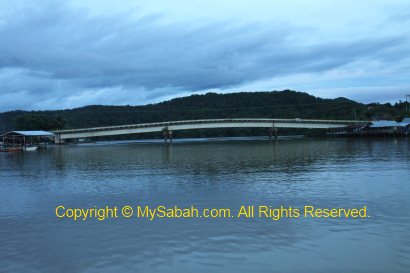 To go there from Kota Kinabalu, just drive in the direction to Kota Belud town. After an hour, you will arrive a roundabout, just follow the brown signage that says “Jeti Ke Pulau Mantanani” (Jetty to Mantanani Island). Then you will see second roundabout (Kuala Abai), follow the junction at the left, and you will arrive the entrance of Usukan Cove Lodge within 10 minutes. 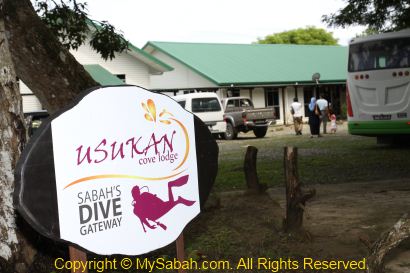 On the way, you will pass by a white steel bridge built by Japanese to transport the copper that they collected from Mamut Minefield about 30 years ago. The locals call it the “Japanese Bridge”. The funny thing is – it is a one-way bridge in arch shape. Cars entering from both directions can’t see each other until one of them reaches the top. One car has to give way (by reversing back) to the car that comes up to the top first. The traffic volume is low so the locals seem to get used to such inconvenience. 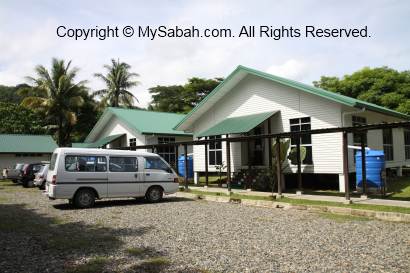 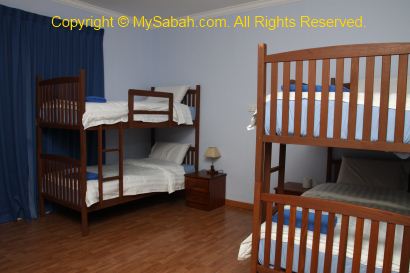 Usukan Cove Lodge offers basic and economic accommodation, from bunk-bed room (2 to 4 beds) to sea front twin-bed room (Online Booking available). These building were used to be the staff quarter of Shell who has oil rig off Mantanani Island. A tour operator took over it in March this year and turned it into a lodge. Though the rooms have no attached bathroom cum toilet, they are clean and cosy. The lodge is able to host maximum of 50 people, so it is a suitable school retreat location. Many European tourists also like this quiet place, because other islands such as Sapi and Manukan are too crowded and noisy to them. But frankly, the beach area there is quite small. 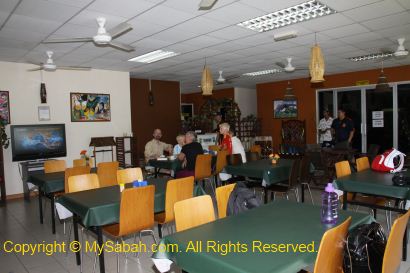 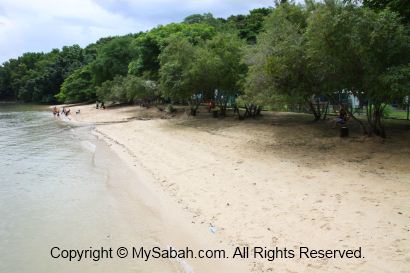 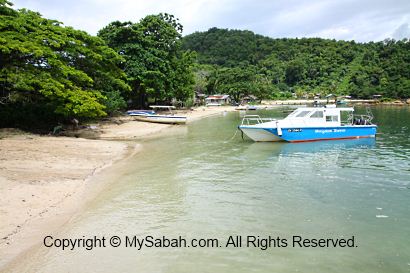 Snorkelling is the best choice of activity due to the rich corals in Usukan. Diving is available but you should not expect “too high” coz in rainy season, the flowing river nearby would make the sea water a bit murky and poor in visibility. One of the highlight is the “Christmas Tree” coral, which I believe is a tubeworm. Turtles and seahorses were spotted here before but not common. There are about 4 dive sites in Usukan, and 3 wreck diving sites for advanced divers. 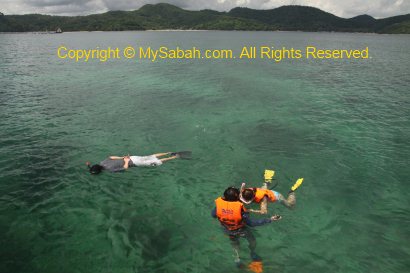 The density and size of the coral reef is remarkable. The boat dropped me in Usukan Reef and Icy Point for the snorkelling. The Usukan Reef mainly consists of hard corals. Each species seems like gathering in large clusters. I saw large areas of big plate corals and stag-horn corals. In Icy Point, I also saw mainly hard corals, with more mix of soft corals and sea grass. The sea water in Icy Point is a bit funny. In one spot I felt warm, but moving a few Metres away I would feel cool, probably that’s why they call it Icy Point. The corals come in different shapes, like big boulders, brain, hand, pyramid, sponge and flower. Though the shore is quite a distance away, the water was shallow and the corals grew quite tall. I had to be careful so I would not destroy the corals by accident. 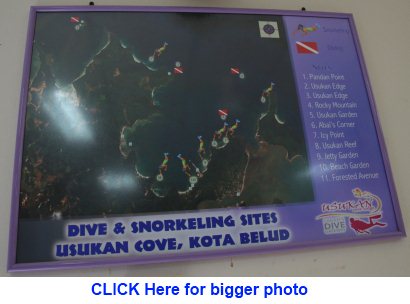 The sad thing I noticed was the coral bleaching. About 10% of corals here were showing sign of bleaching. You can even see these white spots (bleached corals) clearly from the boat. This was not present two months ago. I saw a big and white “coral tree” underwater. Its look was so stunning, like a big snowy tree with ice branches. But the corals were dead actually, a heart-broken but beautiful scene. 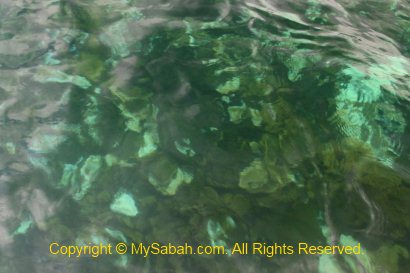 Due to global warming, the corals of Peninsular Malaysia are badly affected and they have to close down 12 dive sites. Now the coral bleaching is slowly spreading to Sabah. It is not a local issue, as other Sabah islands in west coast (in South China Sea) are also facing the same problem. In fact, the pollution from our mainland has been stressing the corals, global warming is just the last stack of grass that crushes the camel. 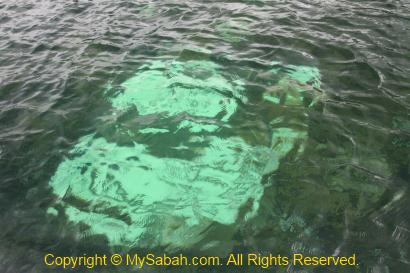 Above: clear spot of coral bleaching

Then I went “deep sea fishing” in the sea 20 minutes off Usukan Cove by boat. Ehem… it was only 14 Meters in depth, not really deep. The “real” deep fish fishing is going for the depth of over 30 Meters. This tour operator does take hardcore anglers to real deep sea but that’s another package. It was so nice that the workers prepared everything for us, the fishing rod, hook and bait, making our lives so easy. 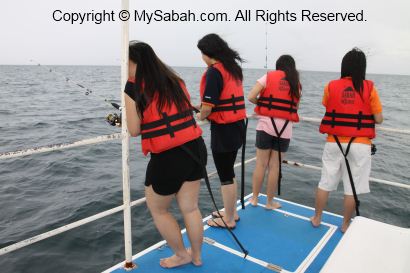 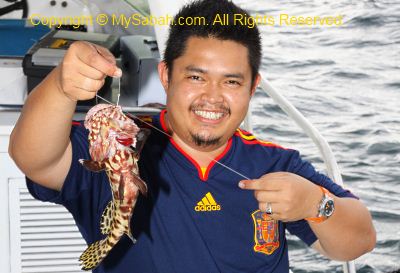 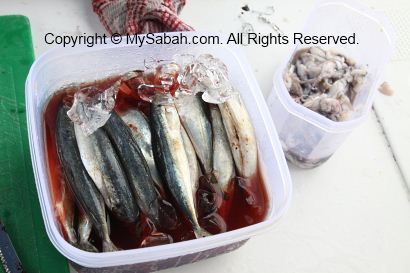 Can you believe it? In 3 minutes, we got our first fish! I thought we were only lucky. But from there on, we got fish in every 3 minutes. That’s not my case though. At first my fishing line entangled, then my fishing hook stuck in a rock, no fish for 30 minutes but the bait was gone, my fishing became “feeding fish”. Then a worker taught me a tip, I had to release my fishing hook all the way down to the bottom, not letting it dragged in the mid water or surface. 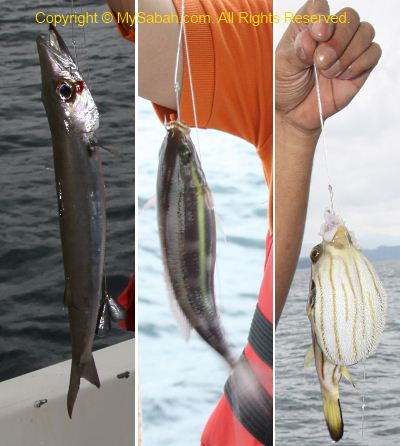 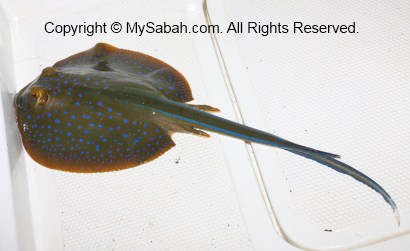 Above: blue-dotted stingray that has venomous sting 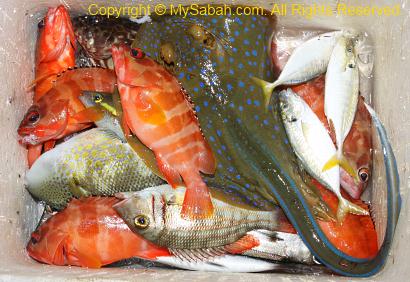 Above: our caught in one hour

The tip really worked! Within 20 minutes, I got 3 fishes, two blacktip groupers (red color) and a Jackfish (silver color). One of us even got a puffer fish and another got blue-dotted stingray. The capture of blue-dotted stingray caused a brief moment of fear onboard coz its sting is venomous. I’m not sure about other countries, stingray is considered a delicacy in Sabah. Its meat is quite delicious if you don’t mind it gets a weird “chemical” taste (can mix it with lime juice to cover the smell). The sea was a bit choppy, so I walked like a drunken man on the deck. Btw, it is perfect to enjoy some beer while fishing. After an hour of fishing, we returned to Usukan Cove Lodge with our fruitful caught and they cooked the fishes for us. 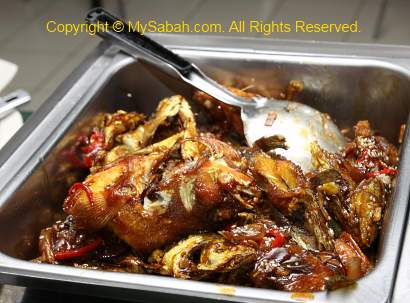 Above: They cooked our caught as dinner. I hope this is steamed though.

Above: meat of stingray

We started our river cruise at Kawa-Kawa River at 4PM, to look for playboy of Borneo. I mean the Proboscis Monkey, which has many wives and always in “ready” mode to mate. On one side of this 15-Meter-wide river is human settlement and another side is mainly mangrove and nipah forest. Since the proboscis monkeys are used to people, they are relatively less elusive and we can get really close to them. 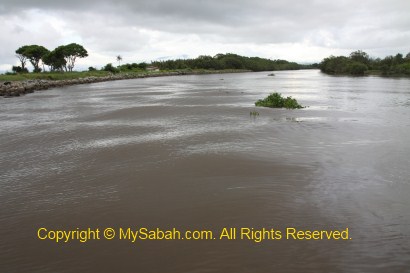 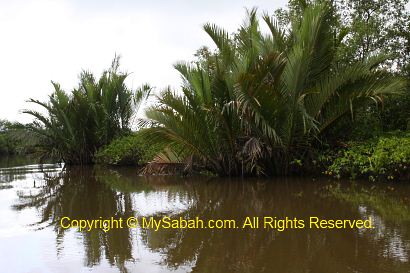 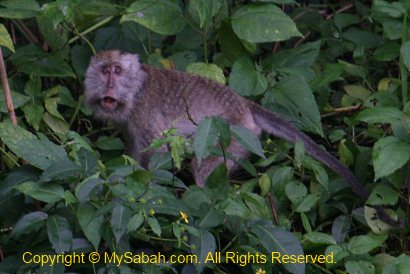 Proboscis Monkey has the habit of spending the night on the trees next to the river in the evening. For them, riverside is the safest site to stay away from predators at night. About 4 to 5 herds of Proboscis Monkey were spotted at Kawa-Kawa River. But there is no guarantee we can see them. Luckily we found 3 groups of them despite the poor weather. 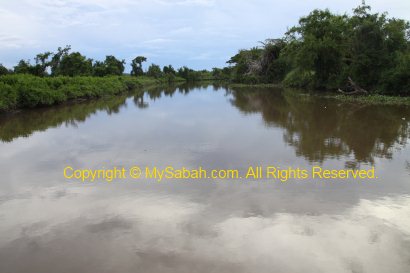 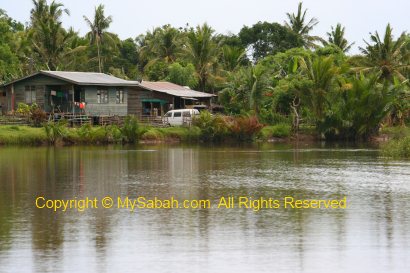 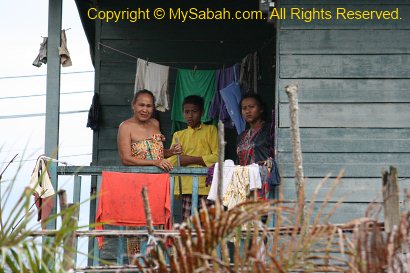 Besides long-nosed monkeys, we also saw crab-eating macaque (long-tailed macaque), monitor lizard and many birds such as oriental darter, white-bellied sea eagle, little heron, blue-throated bee eater, white-collar kingfisher, frigate, doves, egrets and bulbul. After we exited the estuary of Kawa-Kawa River and on the way to Abai River, we were rewarded by the magic moment of the sunset. 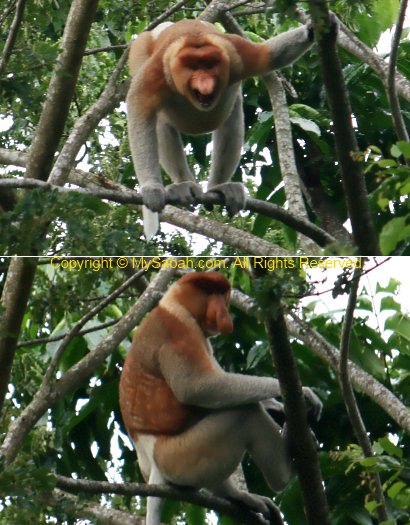 Above: a male proboscis monkey showed warning then ignored us 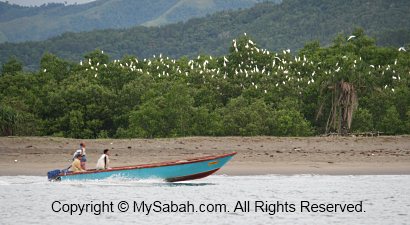 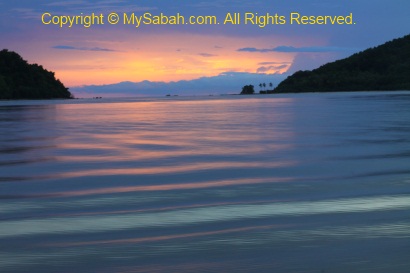 Then we proceeded to the mangrove forest of Abai River to look at firefly around 6:40pm. Normally there should be hundreds of them. Unfortunately, that night was rainy and bright with moonlight, the most inactive time for firefly, so we only spotted a few twinkling fireflies in the riverside. Weather is not something we can control so nevermind then. Anyway, I had so much fun that day and would call it an excellent trip. 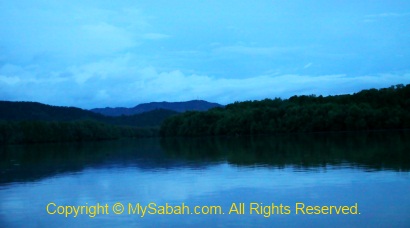 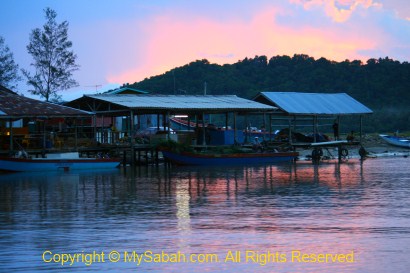 If you are interested in tour to Usukan Cove, you may contact Inno Travel & Tour Services (http://www.sabahholidays.com).