I bet you had heard standard message like “Sabah is blessed because of its rich natural resources such as forest…” in government speech or tourism promotion ad, over and over again for many years. My friends, after you look at the graph below, you will have to stop telling people that Sabah got lot of “kayu balak” (timber). 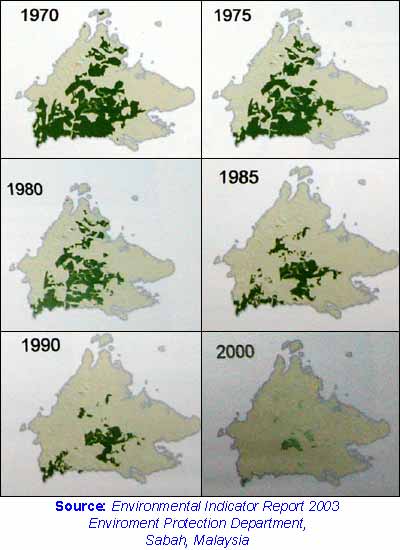 This graph, which shows the remaining forest for commercial logging, is from the government official report. You can find this information easily in reference section of Sabah State Library. Yes, we still have a few protected / reserved forest left, but they are threaten by illegal logging activities. Timber is not something so small that we can put it into our pocket. How can it got stolen and smuggled out “undetected”? Well, all Sabahans know the answer. In the river cruise on Kinabatangan River, every time we could see hundreds of log being transported on the river.

We paid a visit to HABITAT Nursery Centre in Bilit Village. HABITAT was formed by WWF, with the aim of reviving the forest to build the Corridor of Life for Kinabatangan wildlife such as Orang Utan. The tree species (e.g. Tangkol, Bongkol, Binuang, Sangkuang) they select are the ones that can produce fruits (food) for the wild animals.

Most people have a very wrong idea of recovering a forest. They think planting some trees on a deforested area can bring the same forest back. After logging, the soil and environmental conditions have changed. The tree species that are used to live there may not be able to survive. HABITAT has replanted 8,800 seedling so far. Flood is the biggest problem, as it would destroy their effort overnight. They also educate the local community on the importance of forest. 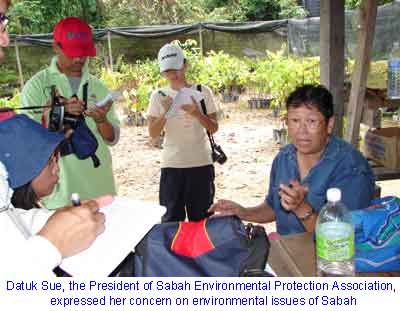 Please give hope to our Orang Utan…

On the newspaper, sometimes we could hear chilling statement like “There is no evidence to prove that logging leads to the declining of Orang Utan population”, “Eating shark fin will not endanger the shark”, “You want gold or monkey?”… Can’t believe all these were from the mouth of the government officers. 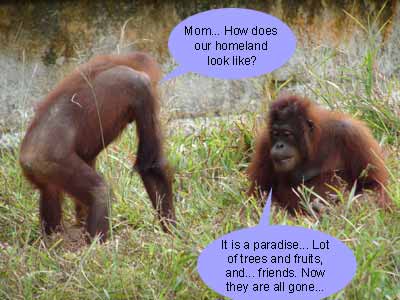 We did a few “symbolic” tree planting at HABITAT. On the same day, we were depressed to see another boat pulling hundreds of log on the river. Sigh… we feel so powerless when seeing those floating log passing by our boat like a long train.

We lose so much but gain so little. Sabah still remains one of the poorest states. Clearing the forest is like killing the goose that lays the golden eggs. In the future, we will run out of natural resources and all living a poor live, by that time, who have the time to care about the living of other wild animals? 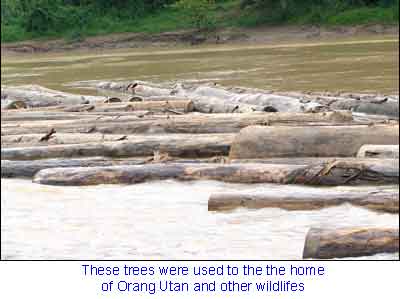 The negative impact of overlogging is not so far away. Below is another graph from the official source, about the soil pollution in river. The report says, “In the year 2000… 47 out of 73 river monitoring stations, or 65%, fell into the polluted category, four were classified as slightly polluted (5%), and 22 clean or free from pollution (30%) (Source: Department of the Environment 2000)” Cool huh? Our rivers are not so far away from 100% polluted.

Logging and agriculture are the main cause of deforestion, which creates soil erosion and flood. Didn’t you notice that the flood in Sabah is getting stronger and stronger, more and more frequent? The problem will arrive our door step and water tap one day, if not now.