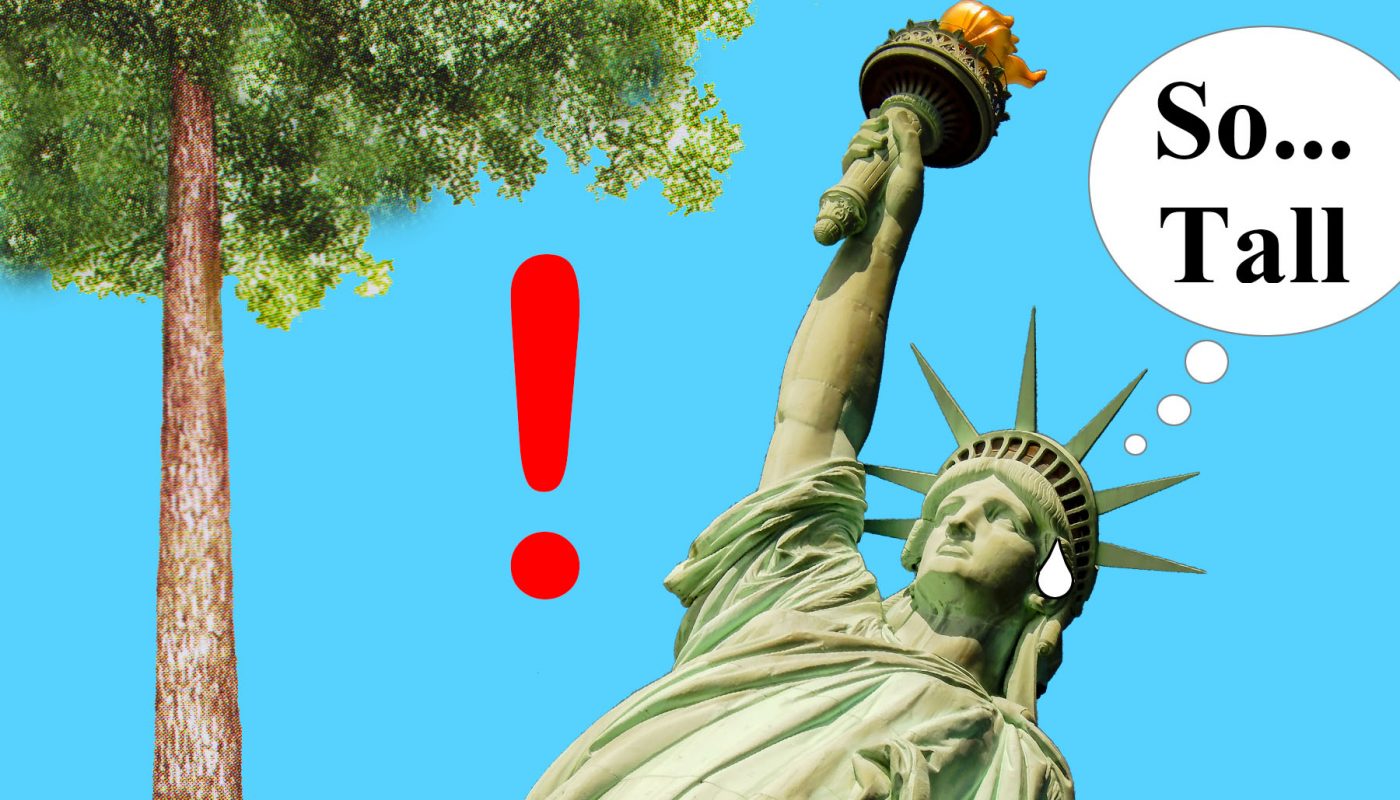 Higher than the Statue of Liberty of US, the tallest tropical tree in the world is a 100.8-Metre-tall (330.7 feet) Yellow Meranti tree (species: Shorea faguetiana) in Danum Valley of Sabah, the Malaysian Borneo. It’s the second tallest tree in the world, just behind Hyperion, the 115.92-Metre-tall (380.3 Feet) Coast redwood in California’s Redwood National Park.

As the first and only recorded tropical tree exceeds 100 Metres, this tallest tropical tree is named as “Menara”, which means Tower in Malay language. Menara is also the tallest flowering plant on earth. In 2014, it’s spotted on a 33 degree angled slope by laser scanner of an airplane that surveyed the rainforest of Rhino Ridge near Danum Valley Field Centre (DVFC).

On 6 January 2019, to get the most accurate height reading, a team of professional tree climbers hiked up to a slope of 436-Metre above sea level to locate Menara. The team leader Unding Jami (Jamiluddin bin Jami) must climb up to the tree top and used tape measure to take the measurement from the top of the crown to the lowest part of the buttress.

The long straight stem posed a challenge, so Unding Jami took almost 3 hours to reach the top. The operation can be risky. There was one time Unding Jami climbed another flowering Dipterocarp and got 200 stings by a swarm of bees. Anyway, it made his day to confirm that Menara is the new record breaker of the tallest tropical tree in the world.

To get an idea of the scale of this towering tree, let’s have some fun to compare it with some well-known objects.

Past Record Holders of the Tallest Tropical Tree

All the past record-breakers are Yellow Meranti trees in first class forest reserve of Sabah. In fact, this is the fourth time Sabah broke its record on the tallest tropical tree in the world. Though these trees are no longer the titleholder, they are still ranked as top 20 in the list of highest trees in the world.

Discovered on 28 May 2018, this 96.9-Metre tree is about 9.5 Kilometre (5.9 Miles) from the entrance of Tawau Hills Park, a national park in Tawau. Tawau Hills Park is a popular place for swimming, bird-watching, hiking and hot springs.

Known as “Lahad Datu”, this tree is located near Ulu Purut Research Station (UPRS) Camp, which is about 7 Kilometres (4.35 Miles) east of Danum Valley Field Centre (DVFC). Most media reported its height as 94.1 Metres (308.7 Feet), an estimated height by laser sensor. About 3 months later, an expedition team visited the tree. They carried out more precise measurement by tape and confirmed that the average height of Lahad Datu is 93.0 Metres.

In April 2016, conservation scientists from the University of Cambridge discovered this giant tree during reconnaissance flights over east side of Maliau Basin (Sabah’s Lost World). However, this record only lasted for four months when another taller tree found in Danum Valley.

This tropical tree was reported by Dr. Roman Dial from Anchorage Alaska University in National Geographic Magazine (July 2006 edition), and it held the tallest tropical tree title for nearly 10 years. It is also the most photographed by the public because it’s only a 900-Metre walk away from the entrance of Tawau Hills Park, which is managed by Sabah Parks.

Another beautiful tall tree in Tawau Hills Park is also worth a mention. It’s a 85.76-Metre-tall (281.4 Feet) Menggaris tree (species: Koompassia excelsa), nicknamed as Pontiankak Putih Cantik (Pretty White Pontiankak in English). It is the world’s tallest legume (its fruit is edible).

Sabah rainforest is over 130 millions years old but not fully explored. For example, 70% of Maliau Basin is not studied. Therefore, I believe the next tallest tree is waiting to be found in future, most likely inside a fully-protected primary rainforest of eastern and central of Sabah, where trees can grow to ultimate height because of the fertile volcanic soil and abundant rainfall. I will keep the record updated here. Hopefully Sabah can keep singing “tinggi-tinggi pokok seraya” (means so high our yellow meranti tree) until the end, like our Mount Kinabalu in Sayang Kinabalu.

However, the height of tree is limited by mechanical, ecophysiological, and hydraulic constraints. The taller the tree, the harder for it to transport the water and nutrients from the root to the tree top (more explanation in this video). The biological limit restricts gymnosperm tree to a maximum height of 122 to 130 Metres (400 to 426.5 feet). Shorea faguetiana also needs some luck to grow super tall. With slender bole and large canopy, yellow meranti tree is “… almost like giant dandelions,” Professor Yadvinder Malhi, said in an interview. “They’re tall and thin, and they’re just trying to catch the wind.” Menara survives being snapped by strong wind because it’s sheltered by a ridge.

The Tallest Stamp of Malaysia

To feature world’s tropical tallest tree, POS Malaysia issued special new stamps for Menara on 29 Dec 2020. The miniature sheet is 180mm by 35mm (7.09 x 1.38 inches) in size, making it the largest (and tallest?) stamp of Malaysia! The 3-part folder can open up vertically and probably the longest stamp folder of Malaysia too. I love the design so much that I bought a few set.

Sabah has so many big and tall trees. No wonder some West Malaysians ask if Sabahans live on trees. I always answer Yes we do and you need an elevator to get to the top lol. For more fun facts about Borneo trees, you can read the 10 most interesting trees of Borneo.

Sorry. No ice-cream for your eyes