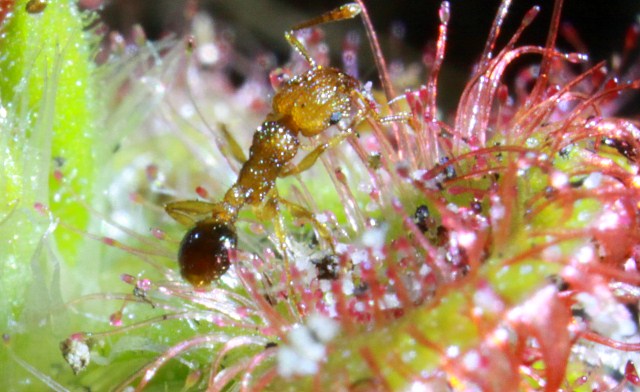 Pitcher plant is the most well-known carnivorous plant of Sabah, but very few know that Sabah also has sundews (or Drosera), another type of insectivorous plant that traps and “eats” insects. There are over 190 species of sundews (Drosera species) and they are widespread in the world. Anyway, Sabah sundew is an interesting “discovery” for me. 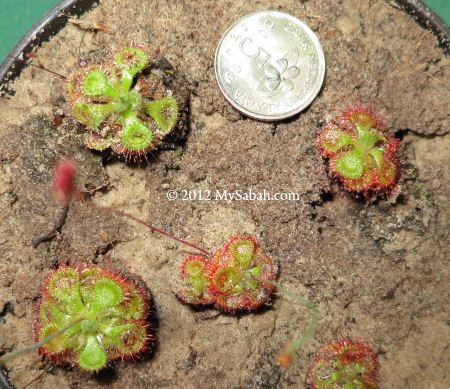 I guess the reason most people don’t see sundews is because they are tiny. As shown in photo above, each plant is about the size of a 5-cent coin. They are almost invisible to those who are not actively looking for them. However, its bright color leaves make my search easier. 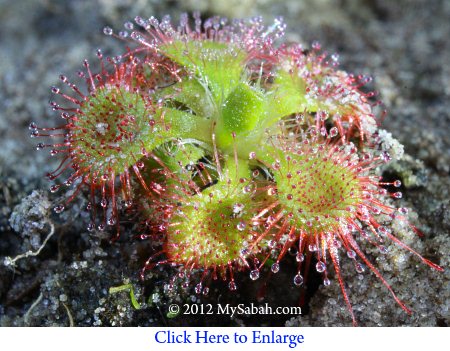 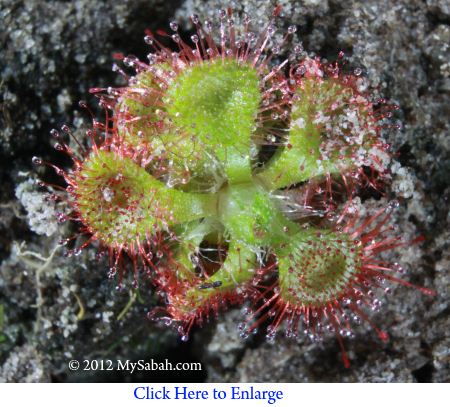 Sundews usually grow in acidic wet soil. This plant needs a lot of moisture, so you may spot them in the humid area of swamp, island and even highland. I found some at the sandy river bank of Binsuluk River near Membakut. It is probably a Drosera burmannii species (tropical sundew). 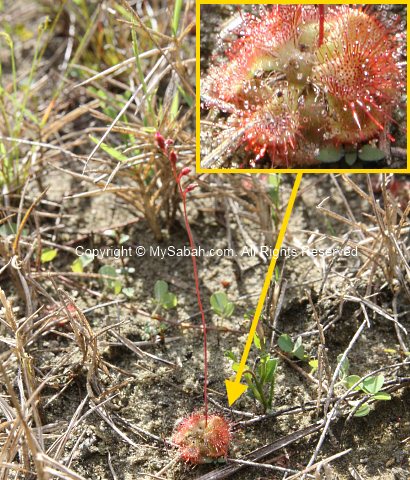 As the soil in which they grow is infertile, sundews lure and trap insects with their sticky tentacles. Once they capture the insect, they will digest it and absorb its nutrition and minerals as a supplement. 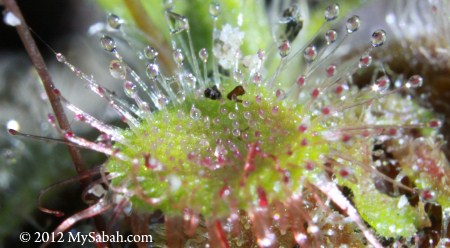 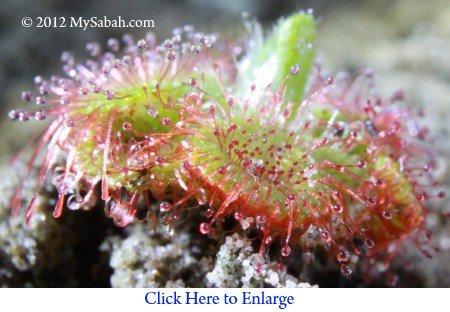 Sundew is very small, so I have to use special lens like a microscope to zoom-into its rosette for photo-taking. It is a very beautiful (but odd) plant when seen up-close. 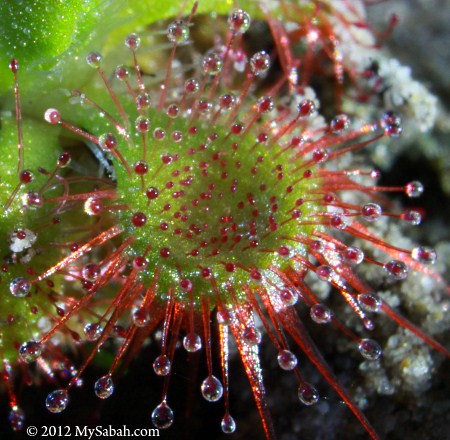 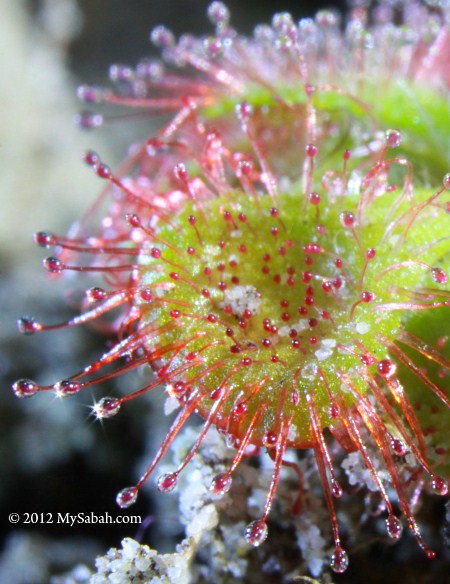 Check out the droplets at the tip of its tentacles. They look like morning dew, right? That’s why they are called sundew, which means Dew of the Sun. Actually these droplets are mucilage, a sticky secretion that glues the prey such as ant. 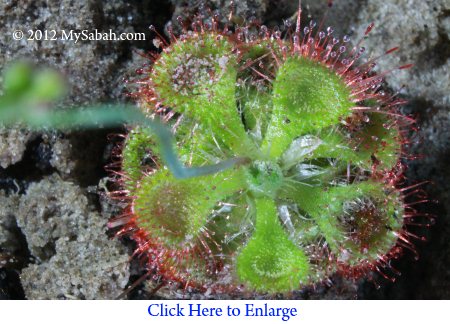 Sundews are fun to look at (especially during feeding time), so someone even keeps them as “pet”. Sundews are protected plant in some countries. I don’t think Sabah or Malaysia has any law to protect sundews. 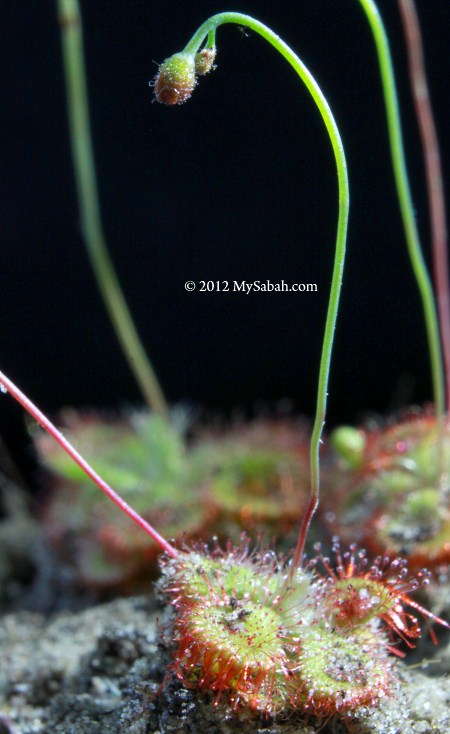 Sundew has long stem that carries flowers far away from the sticky trap of its base, so it won’t accidentally trap its pollinators. 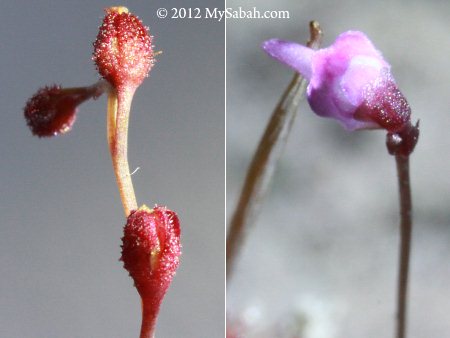 Pic: The flower and buds of sundew. 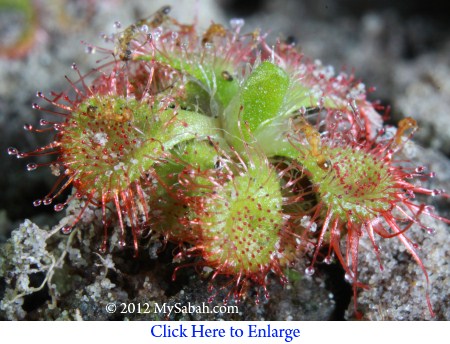 To confirm my specimen is really a carnivorous plant, I purposely put a few ants on its leaves. Note the leaf at the right has very long outer tentacles, which are also known as snap-tentacles. In nature, the sweet mucilage of sundew can attract insects. 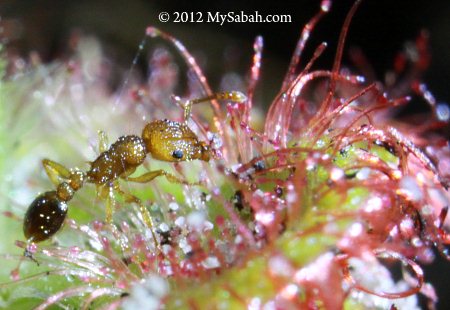 The trap works. The sticky mucilage immobilizes the ants. Their movement becomes slower and slower. The more they struggle, the more they are enveloped by mucilage. Bigger ants are still able to escape in my experiment. 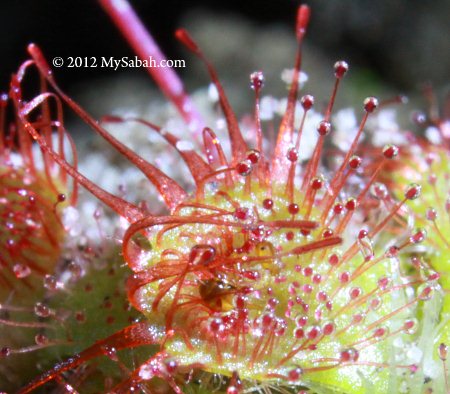 The final blow comes, when the movement triggers the inner and outer tentacles of sundew to bend toward the ants, pressing them to contact more sticky mucilage (see photo above). As a result, the ants are either die of exhaustion or asphyxiation in about half an hour. Sundew will then secrete enzymes to digest the captured prey, dissolving it into nutrient soup for consumption. 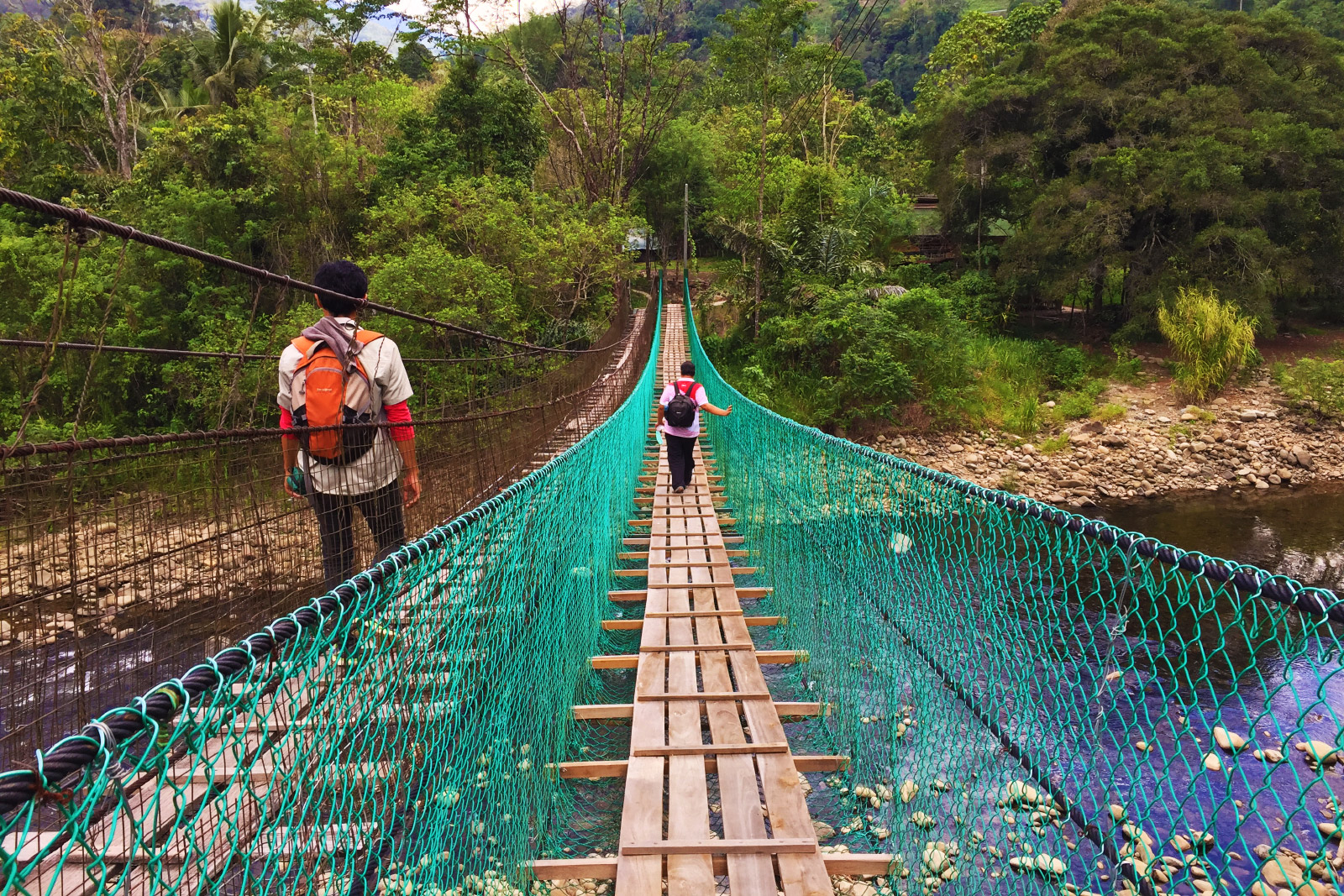 Kiulu Farmstay at the Valley in the Mist 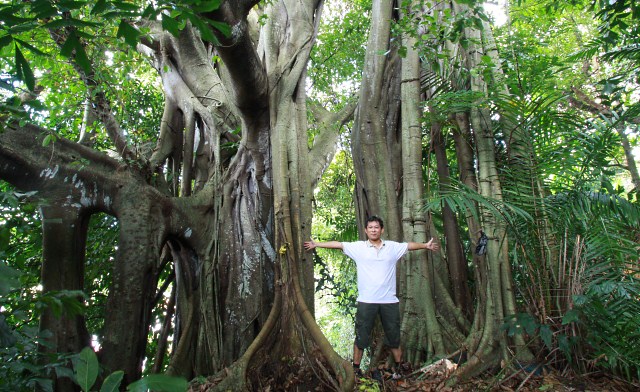 You Jam, I Jam