Look for a painful death just a few feets away? You can have it in Pulau Banggi (Banggi Island) off Kudat town. If you walk around the Bonggi Resort, you will see the sign below by WWF that reads: 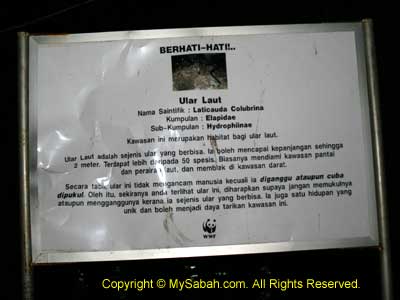 The notice is written in Malaysia language, so the foreigners may not aware that they have entered a danger zone. I only knew it in my second visit to Banggi Island. The locals told me that the sea snakes would leave the sea and wander in this spot after 7pm, then return to sea around 4 and 5am morning. Below is a figure of their moving routes. They love to hide in the tree at the right.

Snake phobia can go to bed early then. Since Pulau Banggi is such a remote place with nothing to do at night, I can sit there and watch them for whole night. The area is dim and not well-lighted, so you can step on the sea snake accidentally. It venom is so potent that one drop of it can kill 7 people, 3 times more poisonous than cobra and can kill us within 2 hours! But its head is very small, unlike most other poisonous snakes. 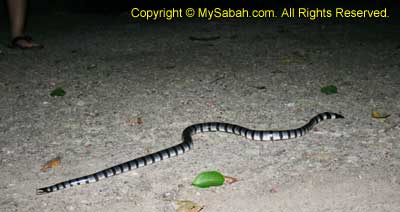 Right after 7pm, I could see something moving in the dark. It was a sea snake in black and white stripes. Actually I had seen Yellow-lipped sea snakes in Sawangan Beach of Kuala Penyu. The difference is the sea snakes here are not so afraid of human, even we were only a few feets away. It just continued to go to the old tree. Later I saw 2 more. They are about 4 to 6 feet long. I saw about 6 in 2nd night. There might be more coz I didn’t stay there for long. 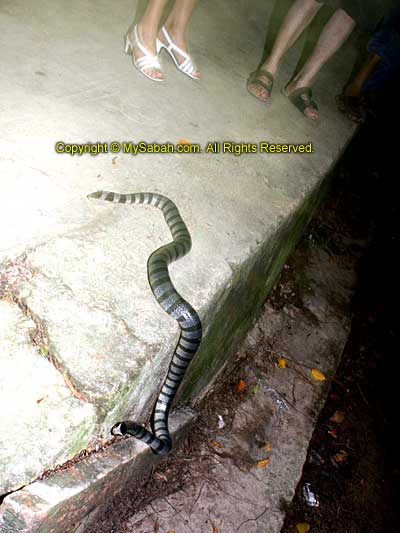 When we were watching the snakes, the locals came and touched the sea snakes and said how “friendly” these snakes were. I know yellow-lipped sea snake is not aggressive, but I think wildlife is not a pet that love to be touched, so better just leave them alone. I was told that the darker color one is more aggressive. 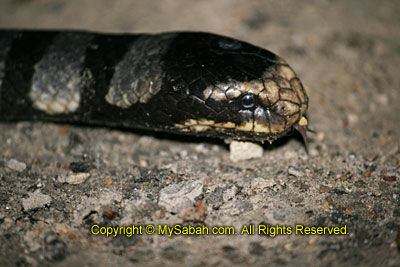 From its flat and paddle-shape tail that is equipped for swimming, you can tell that it is a sea snake. This type of sea snake has the habit to come to land to sleep and lay eggs at night. I have been watching them for 2 night. They just moved back and forth, before really settled down under the trees. I guess the interesting phenomenon here have started about as old as the tree. Even though human has claimed this area long ago, the snakes insist to come back every night.

Sea snakes are always trapped in the fishing net. When the fishermen are busy sorting out the fishes, they might be bitten by this sea snake and don’t know it, due to the anesthetic effect of the venom. Later the fisherman will die mysteriously, and his co-workers would think that it is the act of sea ghost. They will place the dead body in the sea, and “let the sea ghost takes him away”.

Another good reason not to anger this snake is — there is NO antidote for the poison. The hospital would use other substituted antidote for the cure, which is less effective. If the situation worsen, the poison will dissolve the muscles of our body, it is very very very very very painful, then our urine will turn into cola red color. The color is actually the protein of the muscle cells dissolved by the venom. Our kidney will try to filter this protein and will eventually fail due to unbearable burden. At last, we die in agony. 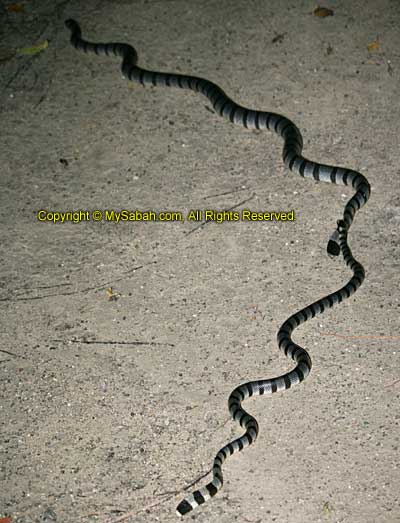 Therefore, if you want a wonderful and unforgettable travel experience, do not mess with sea snake. I hope you get it, I mean the advice, not the snake bite itself. Don’t ask me why those Pulau Tiga guide asks the tourists to hold this snake in Snake Island. Personally I don’t think they should disturb the snakes, no matter they are harmful or not. 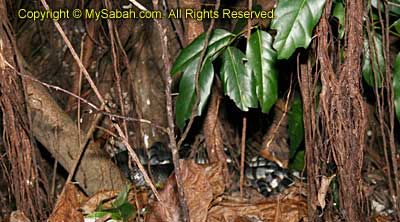 JFYI, ALL species of sea snakes are poisonous.