Not all the beautiful islands are at Semporna. The sea off Kudat (northern tip of Sabah) has a few nice islands that are not listed on tourism map. Maliagin Islands are also known as Molleangan Islands. Actually Maliagin Islands consist of two islands, i.e., Maliagin Besar and Maliagin Kecil (Besar=Big, Kecil=Small).

There is no ferry going to these 2 islands, so I followed the boat of WWF to get there. WWF has some conservation projects on these islands, to recover the corals and to educate the local fishing community not to employ destructive fishing methods such as fish bombing and cyanide (poison) fishing, which are same as killing the geese that lays gold eggs. 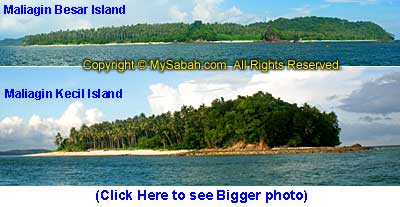 The fishermen are staying in Maliagin Besar, and the smaller Maliagin Kecil Island has no resident. Electricity and pipe water are not available on the island, so they use the water from a well. Other than these, I think they live in a vacation spot. The sea is so crystal clean and the sand of the beach is powderly white. 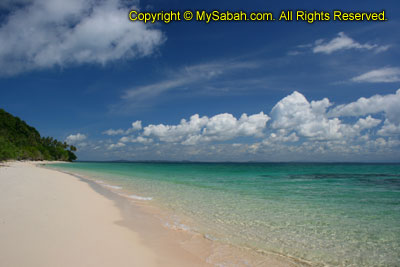 The fishermen are Bajau people, but their houses are built on land, unlike the Sea Bajau who live at East Coast and build stilt houses on the water. One thing I found unique is their graveyard is still outside their houses. You know most cultures want the graves stay far away from the residential area. Probably Bajau has very different attitude towards death.

Excited about this discovery, I walked around the graves to get some photos. Then I saw a small stone next to my feet. Oh sh*t, I was standing on a grave! Quickly I moved aside. I have been hearing scary stories about people being harassed by the spirits coz they offended the thing slept under the soil. Luckily that night was a peaceful one. Looking at my photo album, you would notice that the tombs come in different shapes and size. In fact this gives us some information about the gender, age and status of the deceased. 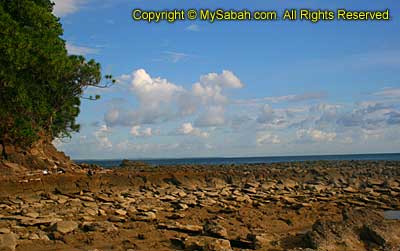 Later we moved on to nearby Maliagin Kecil Island, which is such a tiny spot on the map. Its shore is rocky, in contrast to the sandy shore of Maliagin Besar. You have to walk carefully in the water coz the rock is slippery and covered with a layer of brown algae, sometimes with sea urchins hiding between them. 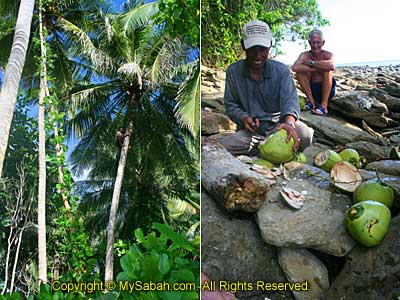 Since there is no people living here, all the coconuts on the island are free for us to enjoy, provided that you have to skill to pluck them high on the tree. Fortunately, the very kind boatmen helped to do the job. Despite the hot surrounding, the coconut juice is cold and it tastes like carbonated drink. It was such a wonderful trip, but the travelogue doesn’t end here. The following days I experienced something more interesting and will share with you later.