I had seen proboscis monkeys in Klias Wetland, Kinabatangan and Lokkawi Wildlife Park. The Labuk Bay Proboscis Monkey Sanctuary in Sandakan is one of the best spots to see them. During the feeding time at 11:30am and 4:30pm, you can a few families (about 30) of them come for the food. 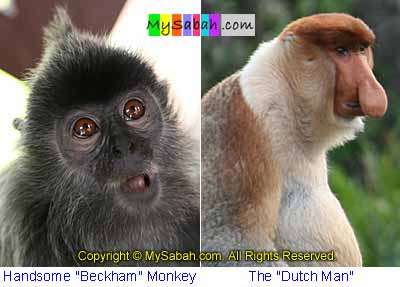 BTW, you also can see many Silver Leaf Monkeys around that area. The people here also call them “Beckham” monkey (probably Beckham looks like them). Proboscis Monkey has nicknames such as “Long-Nosed Monkey” and the “Dutch Man” (Monyet Belanda). The male has bigger nose than the female, and they use their big and long noses as a sex tool to… to… to attract the female. I wonder how do they kiss huh.

Like many other primates, the proboscis monkey family is formed by a few wives and a dominant alpha male. Proboscis monkey is one of the biggest monkeys in the world. Besides their big noses, another thing that makes them very unique is their digestive system. The stomach of Proboscis monkey contains the special bacteria that can digest the cellulose and detoxify the harmful chemicals in the leaves. Proboscis monkey can’t eat banana. Anything with sugar will make the bacteria works very fast, causing fermentation that produces too much gas in their stomach, which can make them very sick. In serious case, the excessive gas will pressure the organs surrounding the stomach, the consequence can be fatal. So the park feeds them with bean, cucumber and sugar-free pancake. In the wild, they eat young mangrove leaves, which can be toxic to other species.

But the baby monkey didn’t seem to understand what its parents were doing. It grabbed the big nose of its dad, attempting to stop the party. lol.. 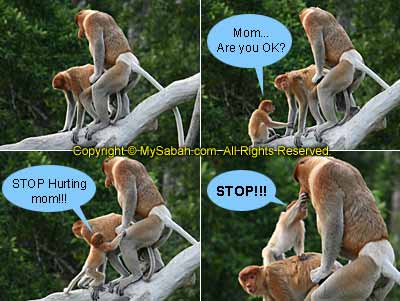 Another thing that amazes me is the “lipstick” between the legs of fully grown male proboscis monkey. It is red hot and pointing at 12’O clock, always in ready mode to serve his wives. Basically, the male is having a lifestyle and penis that every man on earth dreams of. Proboscis monkey is endemic to Borneo, currently there are only 6,000 proboscis monkey left in Sabah, less than 1,000 in Sarawak, less than 300 in Brunei and about 5,000 (need further study) in Kalimantan. 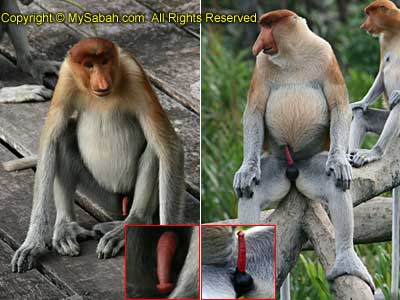 There were some lonely male proboscis monkeys, which don’t have any wife, tried to share the food with other groups. They usually ended up being chased away by the alpha male of other groups. According to the guards, those bachelor proboscis monkeys would form a “gay group“. They don’t really do those gay stuffs. They just group together temporarily for food and protection. One day, they may challenge the alpha male in other group, win the fight, take over all his wives and start his own family.

Don’t forget to check out the high quality photos of proboscis monkey in my photo gallery.

Monsopiad Village and House of Skulls

4 thoughts on “Proboscis Monkey, the playboy of Borneo”