Though this is my second day in Maliau, today is the “real” day as I will go to Maliau Basin on foot. We wake up early in the morning to prepare our breakfast and packed lunch. The porters arrived shortly after we had our breakfast. At first, we thought our porters will be a group of muscular tough guys like King Kong. We are surprised that our porters are youngsters who are “smaller” than us. Most of them are 18 or 20 something, and a few even married with kid. 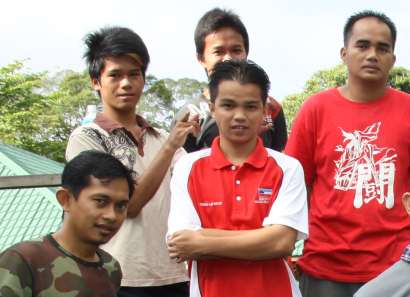 To ease my burden, I get a personal porter that carries 12 KG of my stuffs, so I only need to carry 5KG of my camera and tripod. One of the porters even carries over 30 KG! Seeing the heavy bags pressing their back, I have a bad feeling, like I am treating them like camel, just for a fee of RM100 (USD$32) per day. They are nice people but speak very limited English. 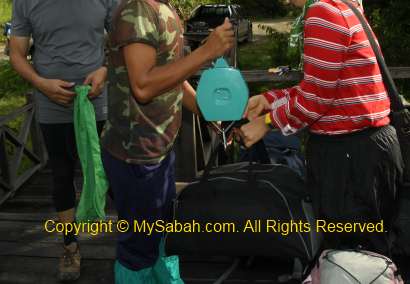 Then everyone is transferred by 4-wheel to Agathis Camp, the starting point of our 9-KM jungle trekking to Ginseng Camp today. Agathis Camp is 8.82KM away from Maliau Basin Studies Center (our hostel) and located at the southern-most edge of Maliau Basin Conservation Area, about 20 KM to the north of the Security Gate and 500 Meters above sea level. 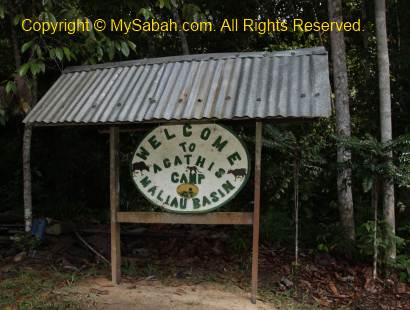 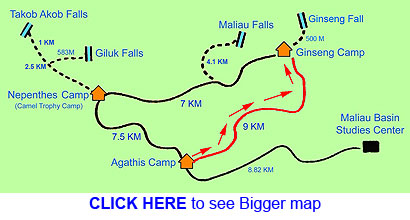 Above: the trail in red is our route for today 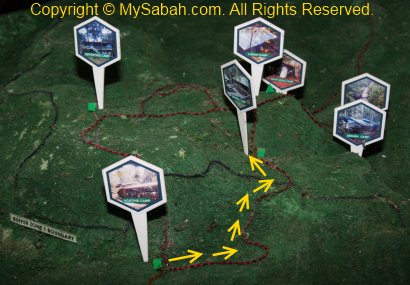 Above: the trail in 3D model

Agathis Camp is named after Agathis trees (Damar Minyak), the large conifers, growing up to 55 Meters, with 3 species being found in Maliau. It is easily recognised by the abundance of resin and distinctive jig-saw patterned bark and absence of buttress. Agathis tree is very limited and scarce in distribution and found in mixed dipterocarp, heath & lower montane forest. 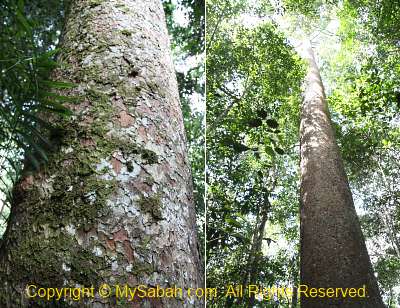 The largest Agathis tree in Maliau has a circumference of more than 7 Meters. Agathis trees were also found in New Zealand. The wood is very popular among the Japanese as it is used for building attractive ceilings and walls. Agathis is considered as the “iconic” tree of Maliau Basin. 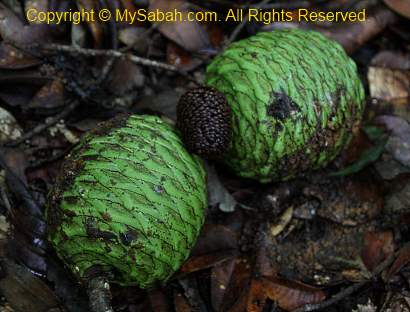 Above: fruits of Agathis tree

Explorer who spent 6 days in Agathis Camp recorded 109 birds and 30 mammals. The camp is near the edge of rainforest and Agathis River. The camp is furnished with very basic facilities such as canvas beds (for up to 30 visitors), kitchen, dining area, electricity supply, toilets and showers. A 1-KM self-guided nature trail at the camp provides visitors with a fascinating introduction to the forest and its wildlife. If you want to stay inside the forest but don’t want to explore deeper inside Maliau Basin, Agathis Camp is a good choice. 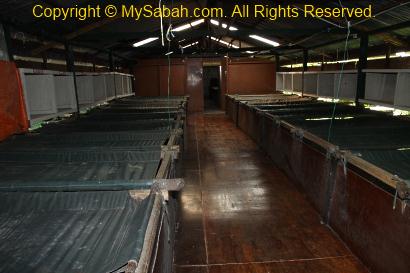 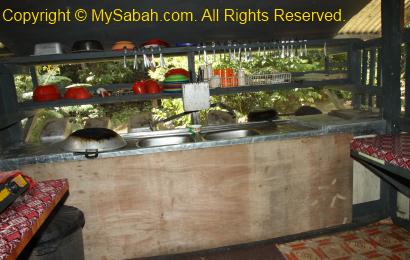 But we do not stay in Agathis Camp. After we looked around in Agathis Camp for a few minutes, we proceed (at 8am) to the next destination, Ginseng Camp, by jungle trekking over a rugged terrain of 9KM. The forest ranger (with VHF radio sets) and porters were also going with us. Forest Ranger is not a guide. He monitors the visitors to make sure they don’t violate the park guidelines (such as poaching and stealing Gaharu wood (Aquilaria malaccensis)). 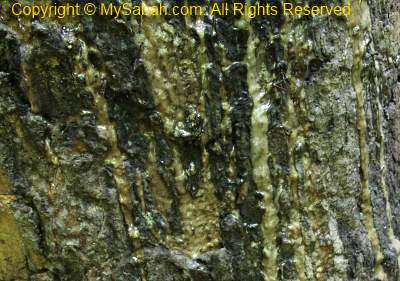 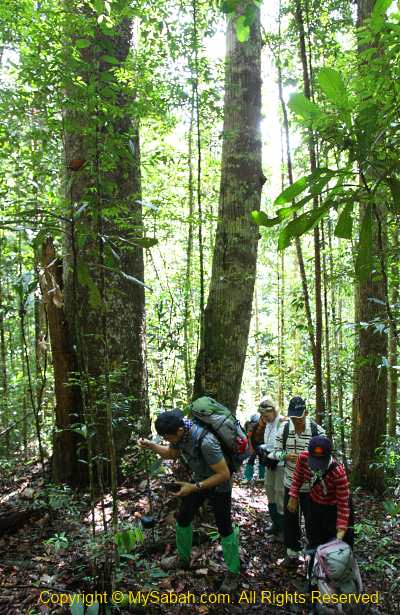 Before this, everyone told me they were either too old or weak and said something like “I will be very slow, please wait for me lah”, but when the trekking started, I was always the last one. Anyway, it is the worst day of Maliau trip for most of us. We are inside the mixture of lowland and hill rainforest, and many trees are over 50 feet high. 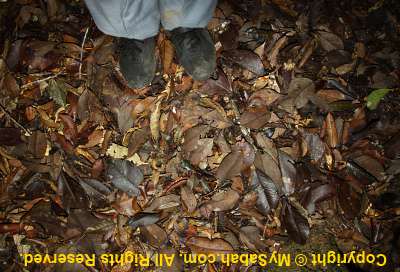 Due to the dense canopy created by the tall trees, the space below is wet, shady and lack of undergrowth plant. Most of the time we walked on thick layers of foliage and saw many tiny insects such as ants, spiders and cockroach fleeing around (and leeches that come to us!), when our steps stir the leaves. I spotted many interesting mushroom and fungus along the trail. 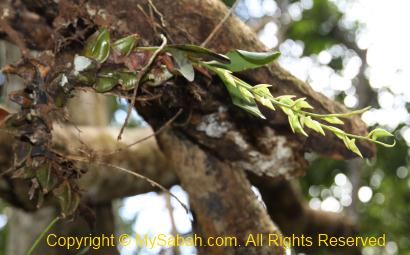 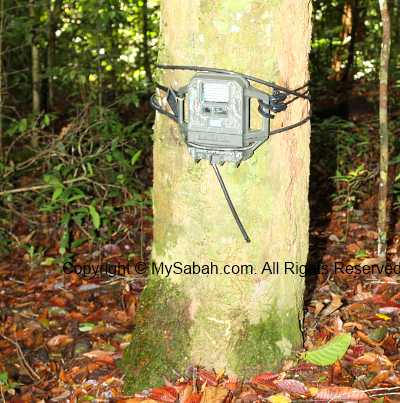 Above: message on camera trap. I guess they are really pissed off already, lol…

Basically most of the trails are uphill roads and part of them is suite steep and need the use of ropes and ladder for moving up. The trail about 3.5 to 4.5 KM before the Ginseng Camp is the most terrible part, due to the steep uphill trail. We saw the sky on higher point. But after the long long walk, we still see the sky, like the highest point is unreachable, very de-motivating. So I quit to look up, I lower my head and only focus on small distance of trail in front of me and move up slowly. 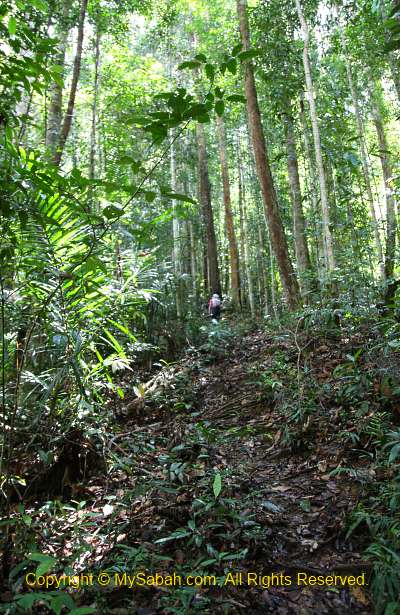 The nice thing is – when we move up to higher altitude, the air getting cooler and refreshing. We have our lunch in the jungle. But frankly I lose my appetite and only take a few bites of the dry rice in lunch box. Then we continue again. On the way, we were constantly asking the guide “how many kilometres left?” and hope to get motivated from smaller number each time. Mr. T is a plant expert so he is able to identify the rare plant for me to photograph. Without him, the trip would be less fun. 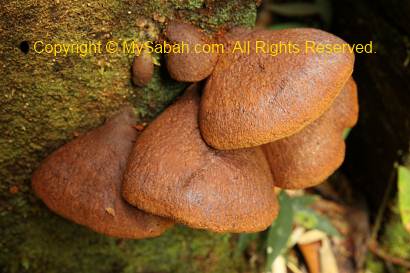 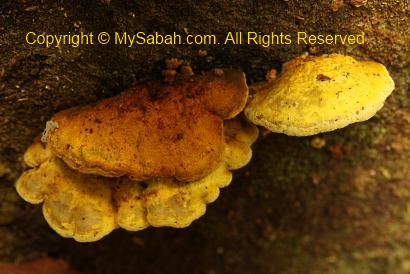 Due to the heavy rain the day before, there are hundreds of slimy leeches on the trail because these little blood suckers are active in wet environment. Though they are blind, they can detect heat and vibration and also extremely persistent, with so many of them around, a few of them will crawl onto your skin eventually. 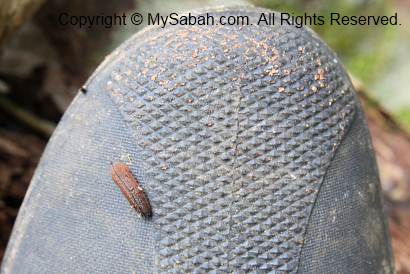 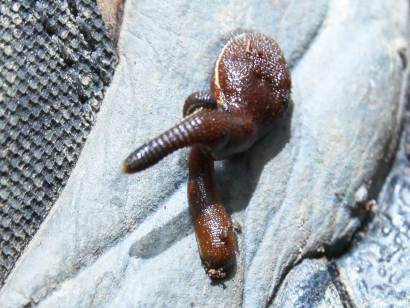 Above: two leeches f**k each other on the shoe

Whenever we stop and rest, we will see dozens of leeches coming to our feet. As expected, very soon the leech claims its first victim, Ms. S, who got a leech bite on her stomach. She didn’t even notice it until a guide told her the bleeding under the shirt. I was once very afraid of leeches. But I become so used to them in Maliau trip and even help others to remove the leeches by hand. 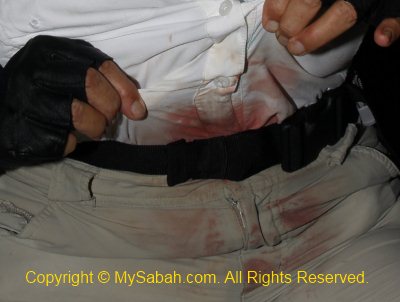 Because I know the leech prevention method, I got only one leech bite in the whole trip. In fact, that only leech bite happened in the camp. Someone didn’t remove the leeches hidden inside their shoes when they entered the camp. So a brown leech crawled out of the shoe and came to me. I didn’t know I was eaten until Mr. T told me. Please always de-leech yourself before you enter the room ok. Usually leech bite only takes a tiny amount of blood and it does not bring any infection and disease. The only problem is the anti blood-clotting agent from the kiss of leech will cause non-stop bleeding for hour. The amount of bleeding from only a few leech bites is as shocking as a devastating injury. 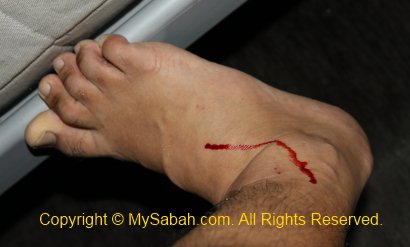 After 7 hours of trekking, we arrived Ginseng Camp at 15:20pm. Ginseng Camp is 645 Meters above sea level. This camp is named after Ginseng plant (Renellia borneensis, coffee family – Rubiaceae) around this place. This “Malaysian ginseng” has reddish-yellow to orange color roots, with medical properties that improve your energy and vitality. 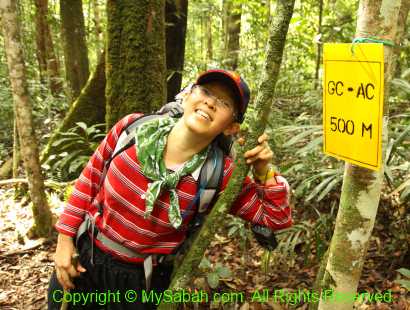 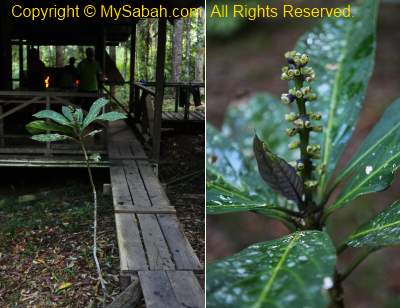 The 27-Meter Ginseng Waterfall is about 500 Meters away from Ginseng Camp, so I took a 20-minute walk to check it out. Below is a 1-minute video of Ginseng Fall: 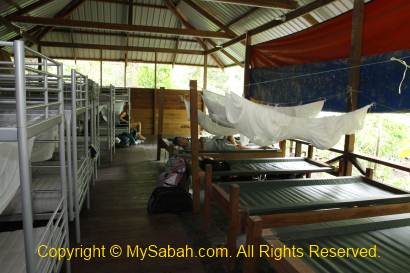 Below is a 1.5-minute video of Ginseng Camp surrounding: 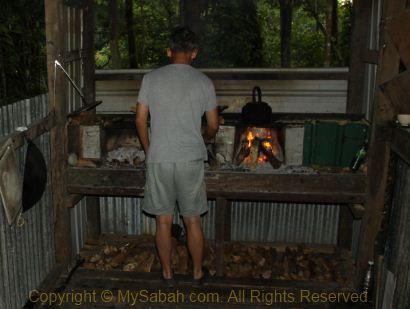 The river is the only source of water inside Maliau, so Ginseng Camp has gravity water pipe that collects water from the river. The river water of Maliau Basin is tea-coloured and acidic, due to the tannins leaching out of the peaty leaf litter. Some even call it “tea river”, as the water is naturally stained by tannins from vegetation. It looks like urine but absolutely safe to drink after boiling. 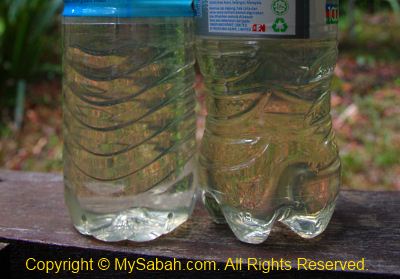 I am a typical city guy. I take hot shower even in warm day. I have no choice in Maliau coz there is no heater. The water is from the river and it is so icy cold, making me skipping and moaning. Then I also hear a Canadian girl next door moans. I’m not alone then. You better take shower earlier when the water is not too cold. 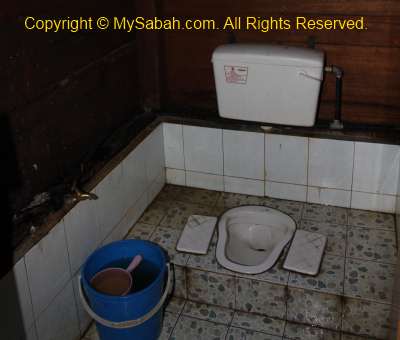 After dinner, everyone is exhausted and there is nothing to do in the evening, so we go to bed earlier. Very soon I hear everyone snores. I lay on the bed and glad that the first day is not as bad as I expect. However, this is not the case to Ms S. She complains that the muscle on her right hip is painful and she wakes up in agony that night at 2am. We call her “Iron Lady” coz she walks very fast and always in front of us. We guess she will be fine in next day. 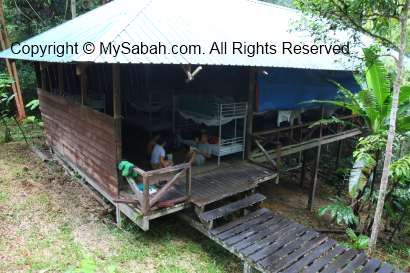 Our sleeping area only has a roof over us and three sides of wall. One side is an open area and has no wall and door. Such setting is same as putting our beds in an open area exposed to the cold. The night was so cold that I wake up at 3am to wear socks. As my torchlight cut through the dark, I can see tiny droplets of mist in the air. It is so cold and humid that the jean and clothing hanging next to me turn wet. I got a good sleep anyway.