Years ago I was told by a friend about the amazing Batu Gong (Music Rock) in Kampung Solibog (Solibog Village) of Tambunan. In Malay language, Batu means Rock and Gong is an idiophones musical instrument. Gong (photo below) is made of galvanized iron sheets and a backbone traditional music instrument for indigenous tribes of Sabah. In fact, gong is also commonly found in South East Asia countries such as the Philippines, Indonesia and Brunei. 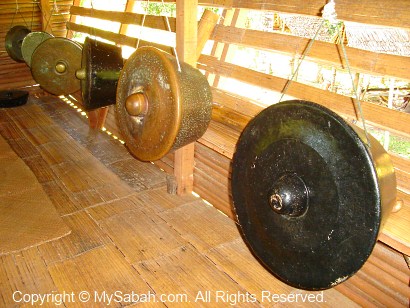 Our people play gong in important social events such as wedding, festivals and celebrations. Usually gongs in various sizes were beaten by a group of players, in different rhythm to produce a harmonious orchestra. If you hit Batu Gong, it also produces sounds resemble to gong. 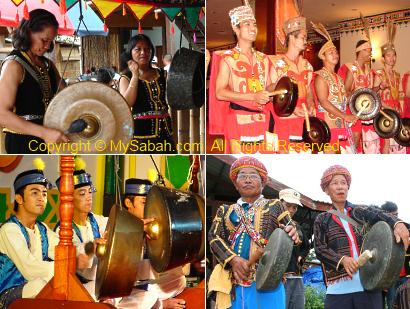 To see Batu Gong, I drove 1.5 hours to Tambunan town, which is about 81 KM away from Kota Kinabalu. I asked the Tambunan people how to get there. Though most of them know about Batu Gong, they don’t know the exact location. They only gave me a vague direction and advised me to ask the villagers when I passed by a golf course. 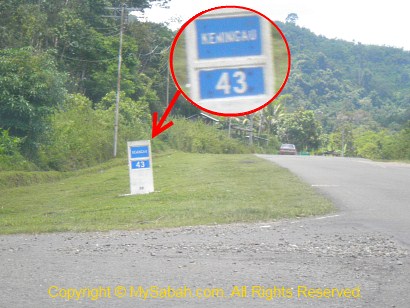 Going from the main road of Tambunan to the direction of Keningau town for about 7 KM, you will see a golf course named TNGC (Tambunan Golf & Country Club) at the left of the road within 10 minutes. Then turn left to a junction just before the milestone labeled “Keningau 43” (see photo above). 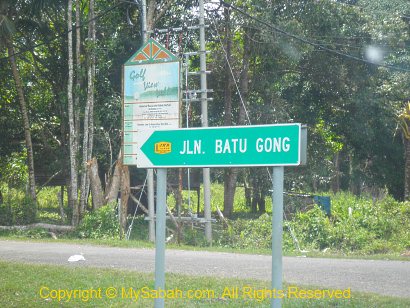 At this junction, you will also see the street sign “JLN. BATU GONG” (Batu Gong Road) with a signpost that reads “Golf View Villa” behind (see photo above). Just follow the small road. 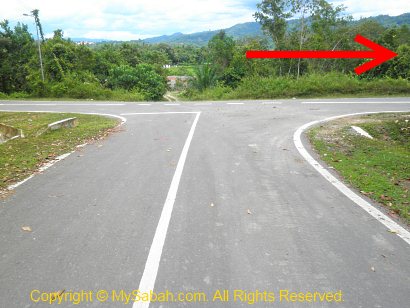 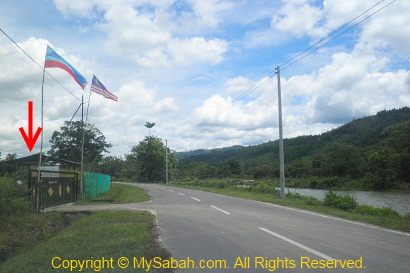 Minutes later I came to the road with river at the right. I drove slowly and saw a white sign “Batu Gong” behind a gate at my left.

Pretty sure that I found the place. I parked my car and walked to the gate. I was a bit surprised that Batu Gong is inside a private housing area. 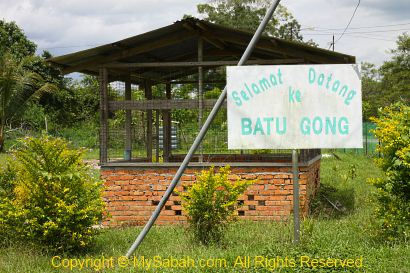 Though a bit hesitated, I opened the gate to enter. Then I saw a hut with a sign “Selamat Datang Ke Batu Gong” (Welcome to Batu Gong). Since it says Welcome, I guess it’s ok to go in. 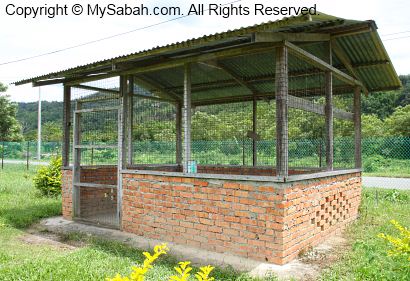 Here it is! They store Batu Gong inside a simple hut built with zinc roof, brick wall and iron fence. 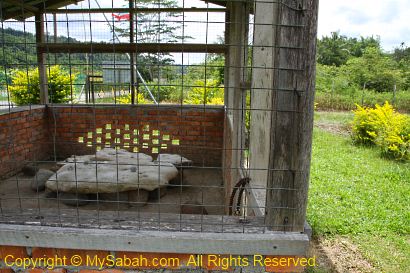 Looking into the hut, I was happy to see Batu Gong inside. 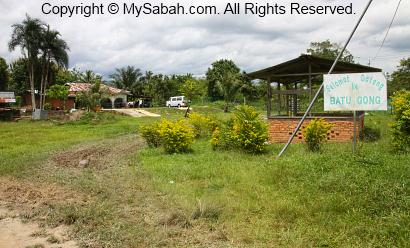 However, this place is a private property, probably I should ask for owner’s approval to enter. I walked to a house nearby. I met the owner, Uncle Yaman, and introduced myself. 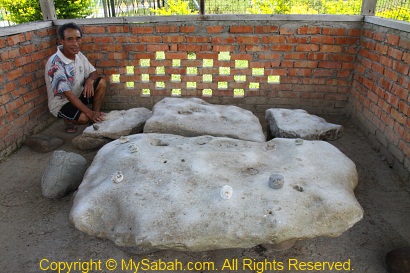 Uncle Yaman is very friendly and more than happy to show me his Batu Gong. The Batu Gong are a few boulders that look like natural ordinary rocks. Judging by their look, I can’t spot anything unusual. The discovery of Batu Gong is also by accident. 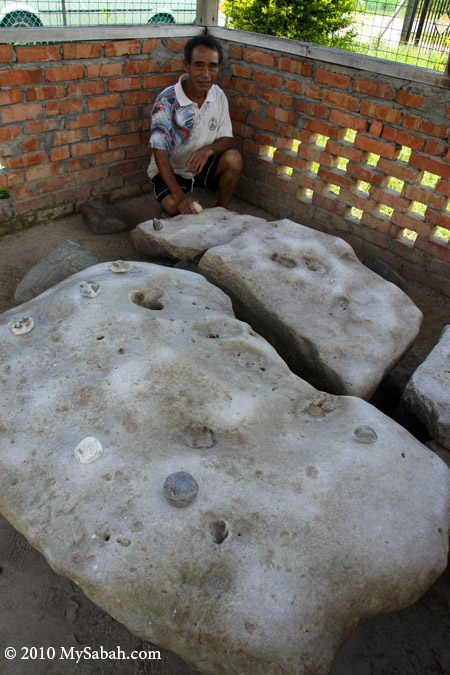 According to Yaman, there was a straightening project of Pegalan River in front of his house in year 1995. A few boulders were dug out from the river and placed at the river bank. Nobody bothered about those rocks. 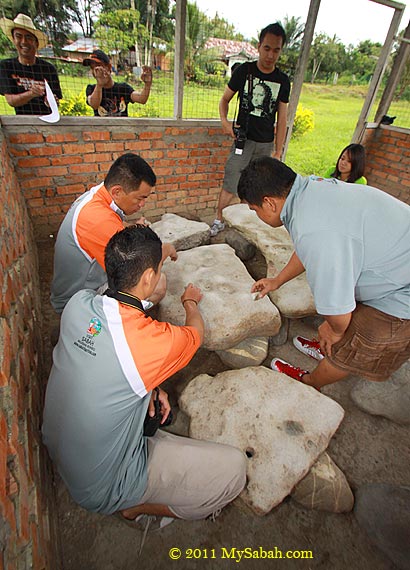 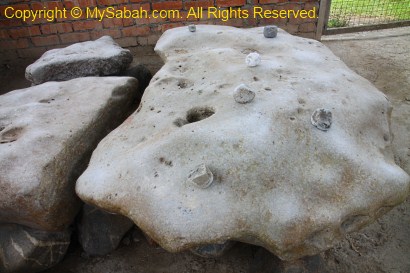 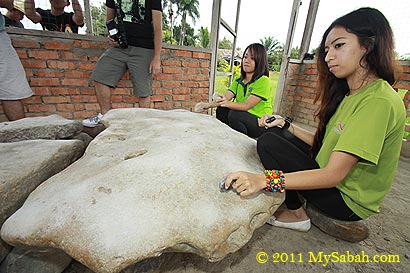 Some village kids like to bathe in this river. Then one day, the adults found that the kids playing with the boulder by hitting it with stone, to produce Gong-like sound. They were so amazed by these magic rocks, so they relocated them to his house for everyone to see. 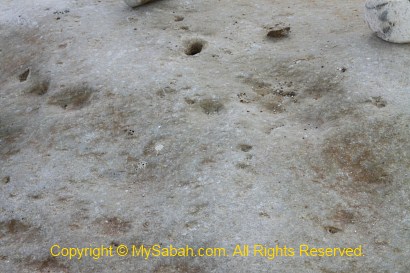 Above: a closer look of the rock. Can you see anything special? Yaman said a Japanese scientist came here before to check out Batu Gong. This scientist believes Batu Gong has high level of iron, thereby giving it a metal property. 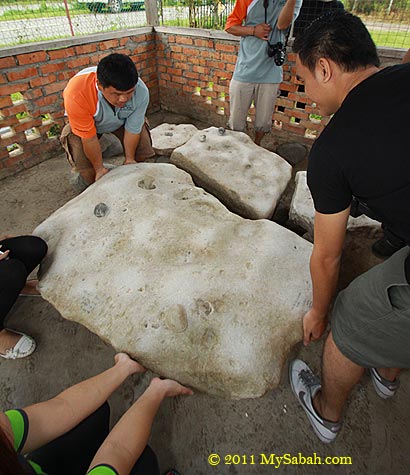 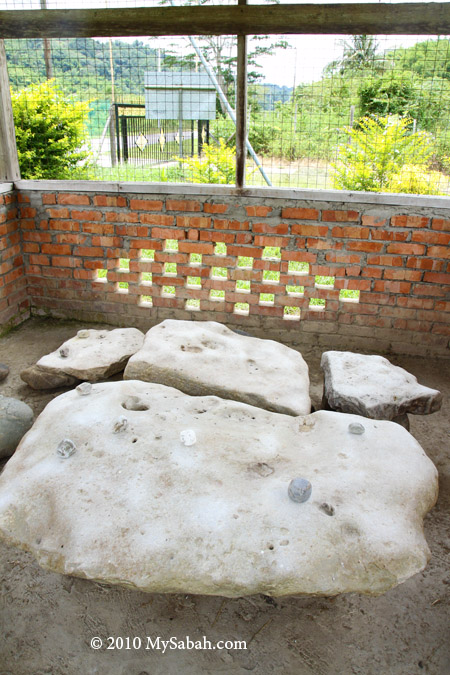 There was someone offered to buy Batu Gong, but the villagers refused, as Batu Gong is such a unique and priceless natural wonder. See 8 small stones on Batu Gong? Batu Gong can produce 8 different tones. Each stone places on the spot that has a unique tone (but a few tones sound the same to me). 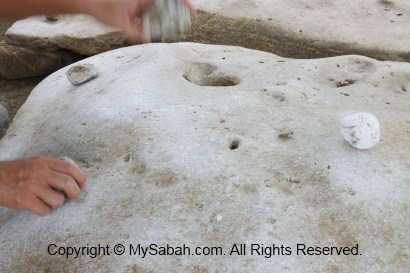 Wow, I can’t believe it. When being hit, Batu Gong sounds like gong (but not very much). Its sounds are crisp and high-pitched. Just imagine you hit the iron bar with a small hammer. My sense of rhythm is poor, anyway, I had so much fun hitting different spots to hear different tones. You can watch the video below to see what I mean. Near the end of video, I also include the sound and music of real gong for you to compare.

I always wanted to see Batu Gong years ago. I only did it after I got my compact camera with HD movie recording function, because I could not show the sounds with photos. 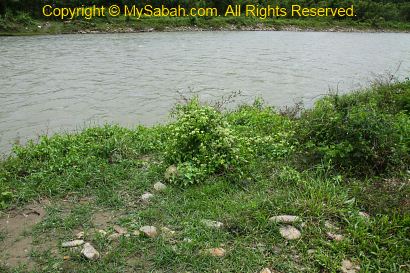 Above: the river where Batu Gong was found. This river is just in front the house of Uncle Yaman. 15 years ago, a project changed the course of this river to free up some land, which included the current housing area of Uncle Yaman. During rainy season, this overflow river still can flood the road next to it, in case you wonder why Yaman built his house so far away from the gate. 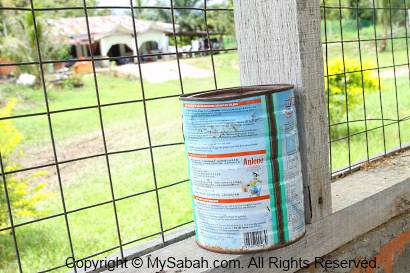 Above: to show some appreciation, you can put money in this rusted tin. Of course you can give more. 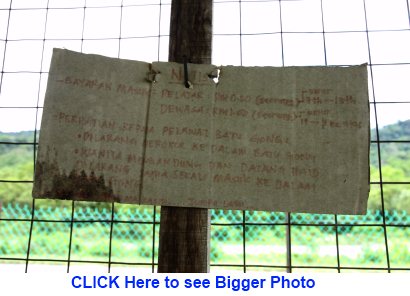 There is a notice in the hut (no longer there, as of May 2016). I didn’t pay much attention to it until I opened the photos later at home. These are “visiting rules” written in Malay language. The first one says “No Smoking”, which is understandable as the holes on Batu Gong look like convenient ash tray. The second rule is odd, it says “Woman in pregnancy and menstruation are prohibited to enter”. Probably Batu Gong is considered as a sacred rock with spirit resides in it?

Just an extra info, music rocks like Batu Gong are also found in Kg. Baginda of Keningau, but I haven’t seen it yet.

Kelambu, One Island and Two Beaches