Even though the west coast of Sabah is more developed today, actually the history of Sabah began in east coast. Not only Islam started near Lahad Datu, there were a group of China migrants established in Kg Silam (Silam Village) more than 100 years ago. The name “Silam” is from the Chinese words “??” (means “poetical south” literally). Another explanation is – Xinan (old name of Silam) was only reachable by Chinese sailed in direction of South-west monsoon (??). This time let me bring you to the ancient Chinese graves in Lahad Datu. 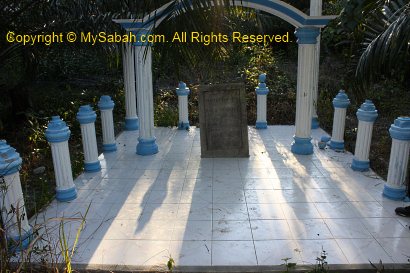 Before we went to the graves, we dropped by an Observation Spot (also very near to Kg. Silam) made by the British in 1890. Someone built a structure to preserve it but it looks a bit funny and “incompatible” with the old monument. This stone was for surveying and mapping purpose near a harbour in the past but now it is inside an oil palm plantation due to retreat of shoreline over time. 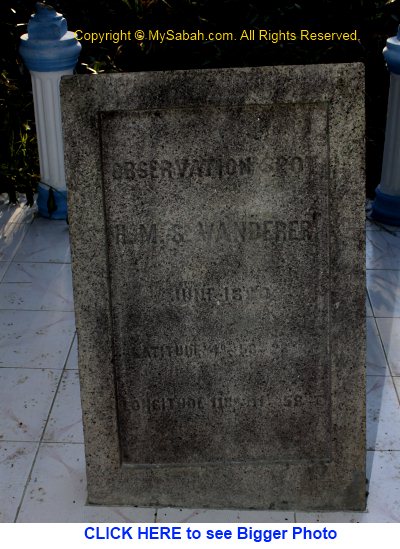 The guide, Vincent said I could Google this observation spot based the words in its inscription. You may search “H.M.S. Wanderer” and see what you can find. The wording on the stone is quite vague. I can’t read its Latitude and Longitude figures totally. 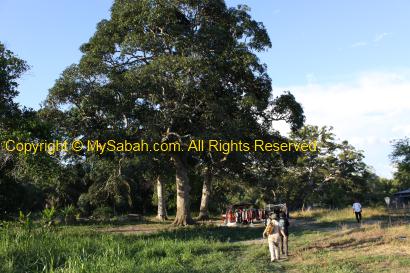 Then we proceeded to the Chinese grave site. The people there are friendly and seem to get used to presence of tourists. 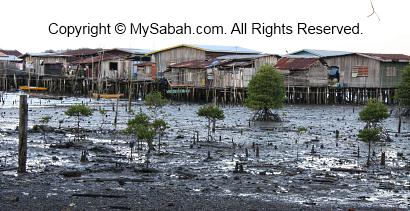 We passed by Kg Silam. In the past, this place was once a busy central and trading post of Lahad Datu. Due to the change of trade policy by British colony, this region phased out and become a small fishing village today. I didn’t see any Chinese face around, so it’s a bit hard to believe many Chinese lived here before. I think most of the population here today are Bajau people. 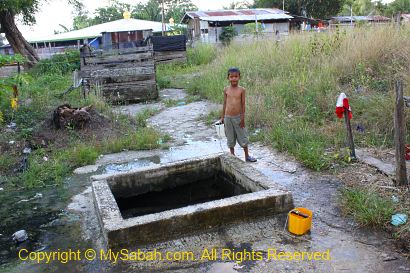 This is a hundred-year old well. The villagers are still using it today. We saw a child scooping water to take a shower next to it. 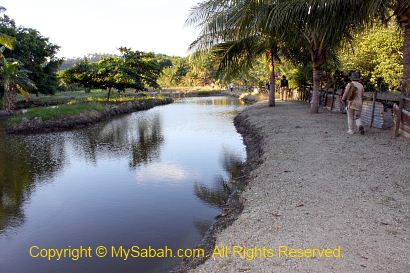 Small lake along the way. This place was a mangrove area I think. 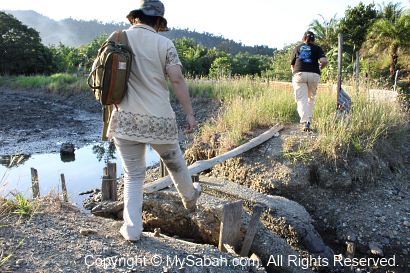 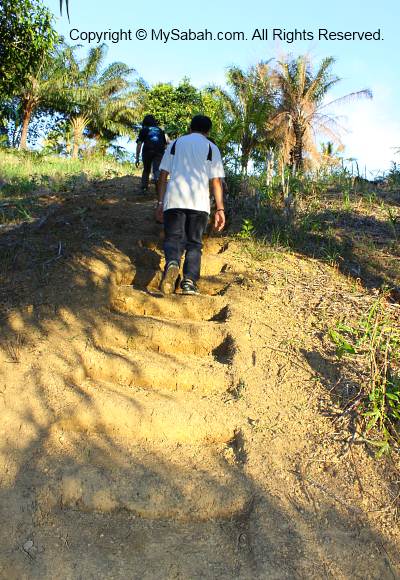 Going up the hill. Do you notice that Chinese like to have their graves on higher point? 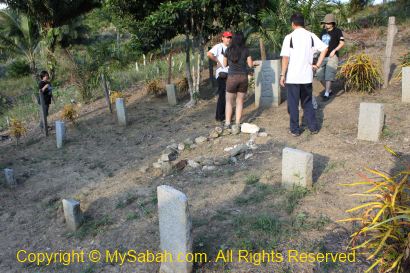 After 10 minutes of walking, we saw the ancient Chinese graves on the slope. Actually what left today is just a collection of about 10 tomb stones. The original graves are already empty because the content was stolen by tomb raider. The nice villagers gathered and fenced all the tomb stones in one spot. 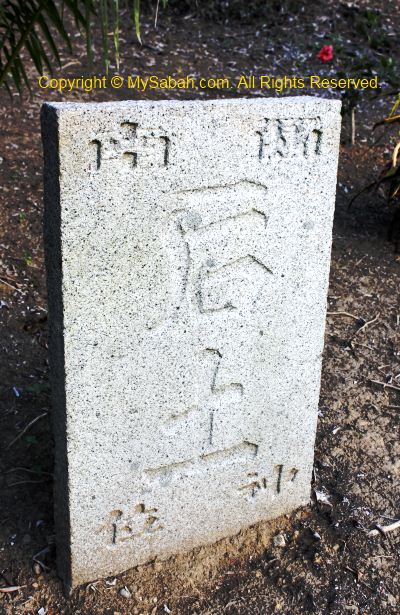 This stone labels with “后土 神位”, look like a signage. I checked the Internet and it says “后土” (Hou Tu) is the 3rd Goddess who created the earth and the world, in China legend. She takes care of ying yang (negative & positive energies) and all living being. She is also known as the mother of the land and Goddess of the earth. This spirit tablet of Hou Tu is for protecting the land and the graves. 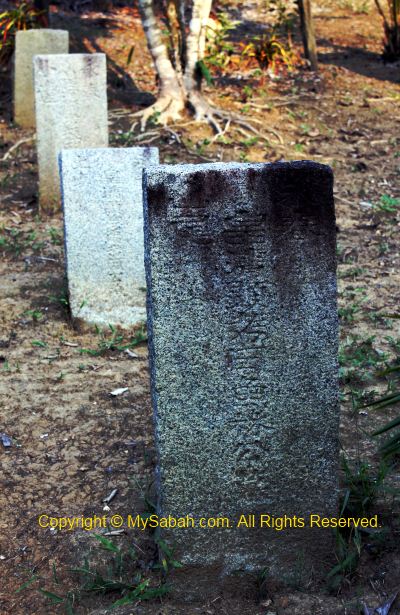 There are some Chinese words written on the tomb stones. I suppose these are the name, date and origin of the deceased. The red ink is gone so it’s very hard to read. 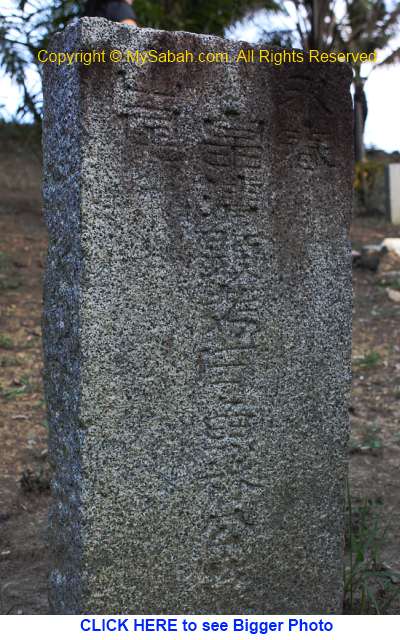 Like this one, I only can see the wording “永春” (Yong Cun of Hokkien province). You can find Chinese family names like Chong (张), Lim (林) and Lee (李) on the stones. Btw, when China was conquered by Mongolia in 14th century, the Mongolians worried that the big population of China could overthrow them easily, so they wanted to reduce the population by massacring Chinese who had one of the five most common surnames, namely, Chong, Lee, Wong, Liew and Chow (张、李、王、刘、赵). This is out of topic, JFYI only.. 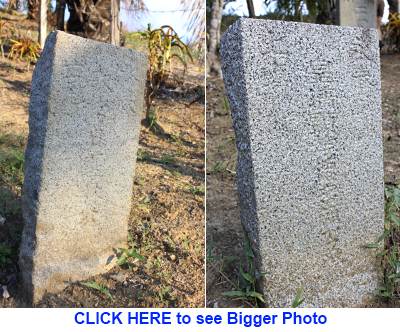 Chinese are very serious about their final home, the graves. Chinese think the deceased will not rest in peace if their graves are abandoned and nobody pay tribute to them, which is a tragedy. If the ancestors cannot rest in peace, they will bring bad luck to their offspring. Few years ago, my uncle dreamed that my late grandfather was complaining about the leaking water on the roof. When he came to his grave later, he found a crack on the grave! Coincident probably.. 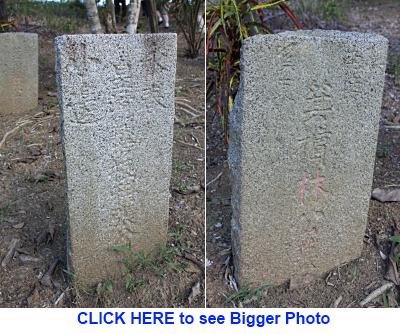 Most graves are belong to early Chinese migrants from Hokkien province of China. Someone believe Silam was once a port for China traders to source for bird nest from Madai of Kunak, which is not far from here. 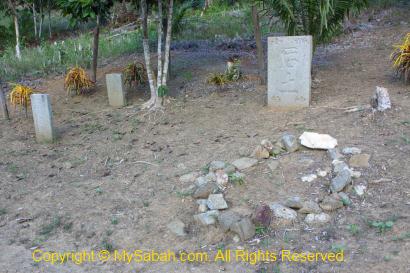 One of the graves is built between 1875 and 1908, during Ching Dynasty (清朝光绪年间) in China. That is more than one century ago. The time China ruled by Manchuria. The men were forced to keep a “pigtail” behind their head. The Manchurian government said, “keep a pigtail or lose your head”. 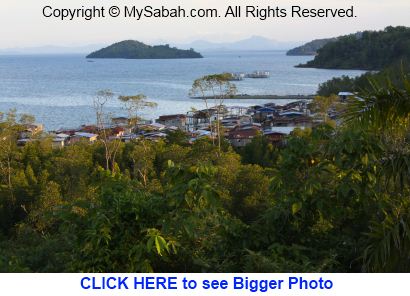 Going further up to the top of the hill and you will get a nice view of sea and hill around Silam. If Silam sounds familiar to you, yes, it was the location once chosen for building of dirty coal power plant. The government might build a 100-Meter observation tower here. That will be a great photography spot in future.

I wonder if these Chinese ancestors always stood on this hill, looked at the sea and missed their hometown? Sadly, after 100 years, none of their stories and history are recorded. It’s Chinese tradition to be buried in hometown, even if they pass away overseas. For the deceased Chinese in this ancient graves, they may have already called Sabah their home 100 years ago.

One thought on “Ancient Chinese graves”