If you drive along the road at Sandakan, Tawau and Lahad Datu, you will see an endless sea of oil palm, instead of scenic countryside covered with lush forest. Funny thing is – Tourism Malaysia setup some ad billboards, right in front of some oil palm plantation, portraying Sabah as the ecotourism destination. The disappointed tourists would ask, “is oil palm your primary forest?” The oil palm plantation is such an eyesore, whenever I know that it is strongly linked to the miserable haze that attacks our land every year. Indonesia has been a lousy neighbour and Kalimantan seems to have problem to stop farmers to clear the land by burning forest. A predict mentions Kalimantan will lose all its rainforest within 3 years. Great! They will have Nothing to burn soon. 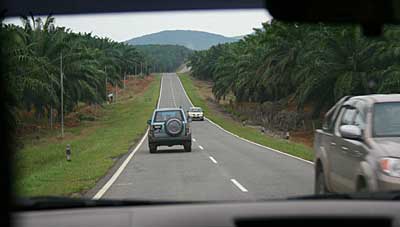 Hundreds square miles of land in Sabah is now an ecology desert. Now this tree is invading area such as Pitas and next to new road from Keningau to Tawau. Trying to fool us that our forest conservation is doing great, government declares 12 new forest reserves earlier. Do you know that our forest reserves are surrounded by oil palm? So these forest reserves do not connect to one another and each reserve becomes an isolated island. Wildlife is locked in small patches of fragmented forest so they can’t move to other reserves for food and breeding. Orang-utan, pygmy elephants and rhino cannot migrate anywhere else. 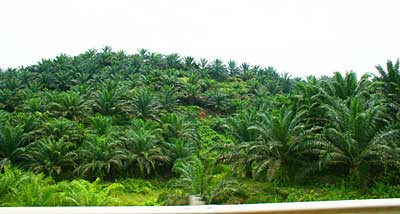 Click Here to read the full article “Borneo’s Moment of Truth” by National Geographic and judge it yourselves.

Some extracts from the article..

From the coal power plant, expensive Mt Kinabalu climbing fee and oil palm cases, by now we should aware that foreigner organisations do not love our land, so we should learn to love our land and protect it ourselves, instead of counting on government who loves those big companies and disregard the warning from citizens and NGOs such as WWF.

Undoubtedly, oil palm plays an important part in our economy. Oil palm itself is not a “sinful” crop. However, it is only the way oil palm companies plant it cause a lot of environmental problems. Hopefully, they will strictly follow the Roundtable Sustainable Oil Palm (RSOP) guidelines to strive for a balance between profit and environment. The western media like to point fingers at the negative impact of oil palm in our country. But they should realise that their countries want cheap palm oil instead of costlier palm oil produced under RSOP. So please stop to be hypocrite. 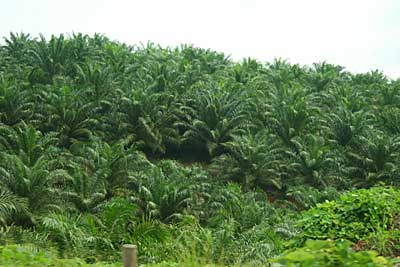 Everyone knows the recent storm “Morakot” flooded half of Taiwan, and landslide killed many people and some area was buried under 4 and 5 floors of soil and rocks! The Taiwan government acknowledges that the disaster was caused by over-development of hill area. Our government attitude is very different though. When over-logging caused flood in Tenom and weak hill structure made whole housing collapsed, they just attributed these as “Act of God”. And as usual, no government officer need to be held liability. When the slope is clear, the rain will wash the soil into the river causing a shallow and narrow river. One day, if the rain is pouring and the developed hill can’t hold the water as effective as hill forest, big flood will happen.

According to State Forest Enactment, any development and farming is prohibited on the slope steeper than 25 degrees I think? However, I saw many many steep slopes are clear for planting of oil palm. Isn’t it illegal? Hill development was asked to be stopped many times. But who are still approving such projects? One day when tragedy like Morakot happens (touch wood!), you will not surprise to hear government says that such man-made disaster is Act of God again. Good luck!

Clearing of forest for oil palm plantation is a win-win situation. Timber companies got their wood, oil palm companies can use this clear land to plant cash crop, and you all know, some politicians and government officers will win fat cash under table. The losing side is the rakyat (citizens), who will get flood and pollution. 90% of workers in plantation are cheap labour from foreigner countries, so this industry does not create many job opportunities for locals like government claims. FYI, the oil palm companies love our rainforest soil, coz it almost doubles the yield of oil palm. 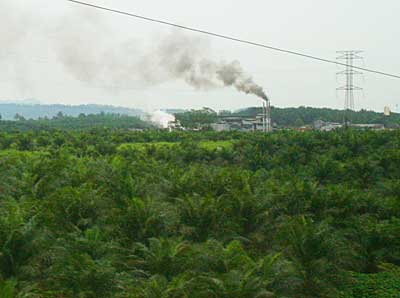 After 308, anyone who still believe Barisan Nasional government is an idiot. Remember Musa Aman asked the plantations, which encroached the river side of Kinabatangan, removed their trees or “faced the music”? He said it twice on the newspapers in 2004 and 2007. But anything happened? No. He was really singing only. The encroaching oil palm are still there. Furthermore, the oil palm mills still dump tons of toxic chemicals into the Kinabatangan River. Many fishes die and the water is getting dirtier to drink, affecting thousands of locals who rely on the river. 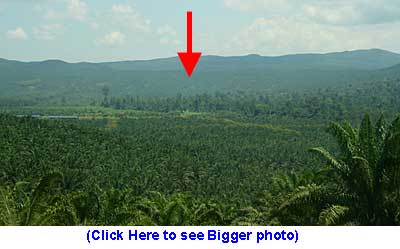 Zoom in the photo above and you will see one of the ocean of oil palm, scary… Sabah is becoming the Land below Oil Palm. This is a common scene in Lahad Datu.

Before the land was clear for oil palm plantation, there are beautiful forest with tall trees like photo above. These trees survive because these trees are in forest reserve, but is nothing if compared to the size of oil palm land next to it. 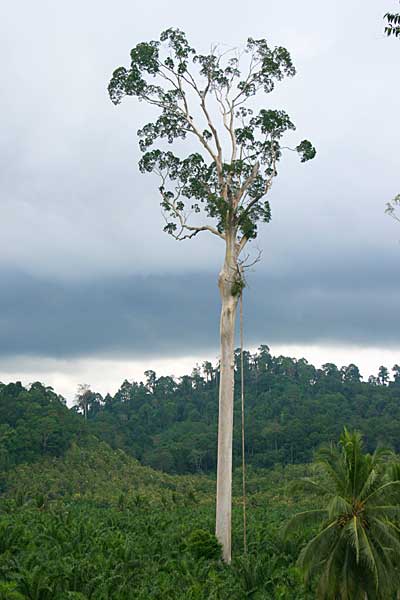 Looking at the photo above, may be you wonder why this tall tree in the oil palm land was not cut down. Usually the oil palm planters will purposely keep a few tall trees in the farm, but not for conservation. This tree is for bird predators such as eagle and owl to rest on, so they can help the planters to control the pest such as rats. What an exploit.. However, this tree does remind us that this land was once covered by many big trees like this. Malaysia Palm Oil Council (MPOC) claimed that no new forest areas had been allocated for planting oil palm since 1990. The photos here prove that they are liar.

The Mania of Flag

13 thoughts on “The Land below the Oil Palm”