I first knew pistol shrimp (aka snapping shrimp), one of the loudest animals on earth, from Discovery Channel, and I was so happy to see this strange animal exists in an unexpected place – Manukan Island (Pulau Manukan) of Tunku Abdul Rahman Park. 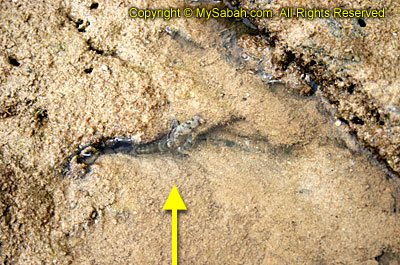 Compared to other islands nearby such as Sapi and Mamutik, the long and white sandy beach of Manukan Island attracts the most number of tourists. After I was done with snorkelling, I decided to check out the rocky shore behind the island. 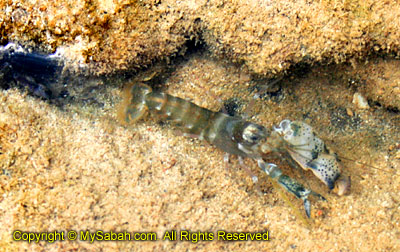 Hearing popping sounds, I knew this fellow was around. I search among the rubble partly exposed on the water. Then I sensed something retreated very fast into a burrow under the water. 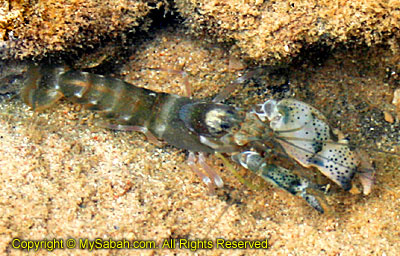 Quickly I stayed motionless next to the small burrow. About 5 minutes later, an 1-inch shrimp came out. My goodness, look at its left super claw. Doesn’t it look like a robot in Japanese anime? It was busy cleaning up the stone in and out of the burrow. 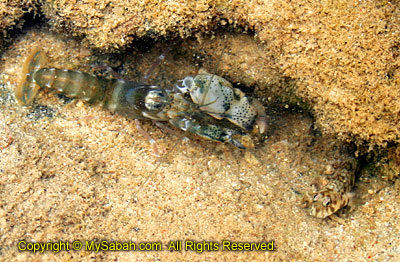 However, its huge claw is more than for display purpose. Pistol shrimp uses this specialized claw to shoot a burst of bubbles to stun its prey up to 4 cm away, and the force is enough to kill a small fish. The explanation of such sonic weapon is quite technical. Basically, this shrimp snaps its oversized claw shut to create a high-pressure cavitation bubble, like a jet of shockwave. As the bubble collapses, the cavitation bubble reaches temperatures of over 5,000 K (4,726.85 degrees Celsius)! FYI, the surface temperature of the sun is around 5,778 K. 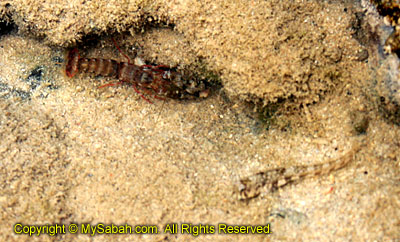 Nature never fails to surprise us. I thought I would only see such phenomenon in “fireball war” in Dragon Ball anime. But our naked eyes can’t see a flash of light as it is very low in intensity. Pistol shrimp does not live in sea only. When you enter a mangrove forest in Sabah, you could hear many loud “bi” and “po” popping sound in surrounding. I contacted the experts and they confirmed these are the snapping sound of pistol shrimps. 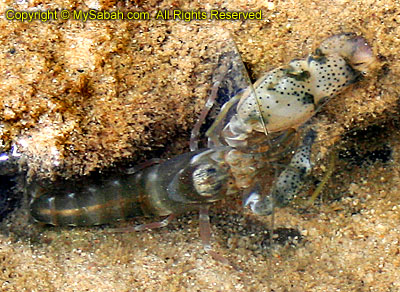 Besides amazing pistol shrimp, there were many sea cucumbers in the water. 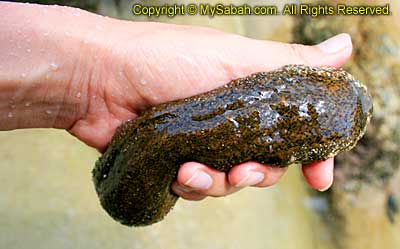 Photo below shows a naked marine creature doesn’t mind living next to a spiky sea urchin. I don’t know what it is but for sure it is not the penis of the urchin. 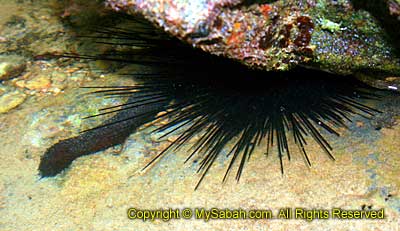 Monitor lizards are abundant along the quiet shore of Manukan. This one is a juvenile foraging for food. 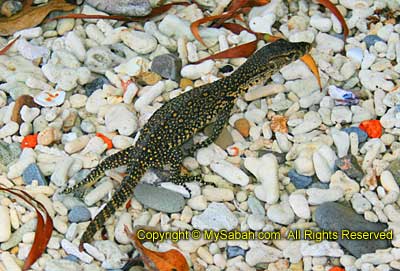 Last week my camera (DSLR) have started to malfunction. I’ve sent it to KL for repair. Hope it will not cost a bomb. Luckily I still have a bunch of photos enough for about 3 to 4 blog. It will be a pain to live without camera for about a month. High-tech devices always don’t seem to build to last.

8 thoughts on “Shrimp that has pistol”