I never expected I would see any sea snake at Sawangan Beach in Kuala Penyu. It all started with curiosity (but about something else). I noticed there were two big rocks, namely, Deer Rock (Batu Payau) and Dog Rock (Batu Kuyuk), about 1 KM away from the shore. During low tide in the afternoon, I could even walk to them.

I thought it would be a good idea to come closer to these rocks, so I could take better photos of their unique shapes. My initial plan was to climb the Deer Rock, coz I saw many sea birds resting on it. I believed there was a high probability that they also built their nest there. Who knew if I was lucky, I could find their baby birds for a photo shooting session.

The sea birds started to make noise when they saw me walking to their Deer Rock. That confirmed my guess was right. See me approaching closer, a group of sea birds took off and flying circled around me, dived down toward my head, like fighter jet, it was quite scary. I even got a 37-sec video clip of those angry birds. 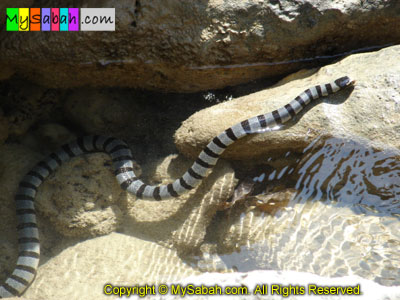 With hesitation, I stopped at Dog Rock first. Suddenly I saw a 5-feet sea snake was about 15 feet in front of me. It also saw me and tried to hide under the rock. Luckily I managed to get a few good shot of it. After a while, it came out from a rock just 5 feet away from me and crawling to my direction, probably it was trying to find the way out. Sea snake is one of the most poisonous snakes in the world and one drop of its venom can kill 3 men, and I was alone, so it is not wise to mess with it. I left the site quickly. Later I learn that it is a Yellow-Lipped Sea Snake.

Guess what? The next day I went back to Dog Rock again. This time I was more cautious and walked carefully. It was quite dangerous coz there were so many rocks, which are the good hiding place for the snakes. Very soon, I found a sea snake under a rock. It didn’t escape. When I walked closer, I found that it was sleeping (note the white eyelid). After observing a few minutes, I was sure that it was sleeping deeply, so I pointed my camera, about 3 feet in front of it, to take its picture.

Then I climbed on top of Dog Rock and looked around. After half an hour of careful search, I found something that really frightening (but exciting). A pile of 3 to 5 sea snakes slept together between the rocks! After confirmed that they were taking an afternoon nap, I moved slowly to a rock near to them. When I took their pictures, my camera was only a few feet away from them. Fortunately I didn’t wake them up. You think I am brave? No… Actually I was really scared but I was more strongly attracted by these beauties. The feeling and experience were totally different from watching it on the TV.

The high tide was coming. I spent too much time on the sea snakes, so I didn’t have time to explore Deer Rock. May be next time then. It is no surprise to find sea snakes there coz Pulau Tiga (Survivor Island) and Snake Island are not far away from Kuala Penyu. You can see more photos of the sea snakes here. 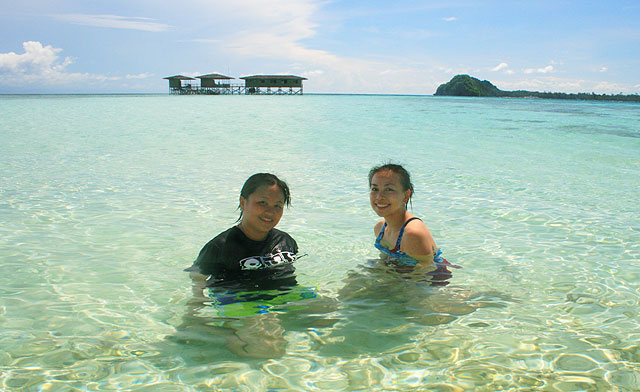 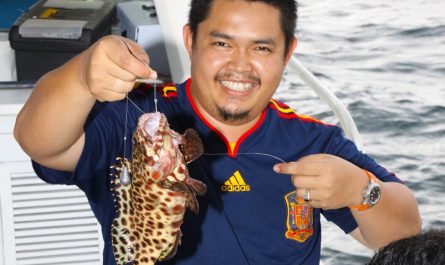 One thought on “Sea Snakes”