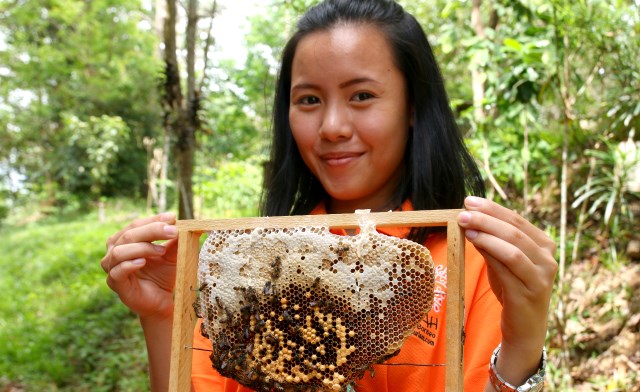 City people will freak out if they see honey bees building a nest under their roof. To most village folks, they are happy to see bee hives, because got honey, got money. However, beekeeping is not really something they do for money initially. In countryside of Sabah, it is fairly common to see one or two manmade bee hives in farm houses. The collected honey is mainly for self-consumption, but Kampung Gombizau (Gombizau Village) has turned honey bee farming into an attraction. 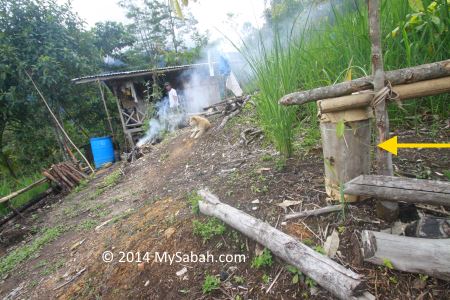 Pic: many village house has a hollow log (a native beehive called gelodog) for beekeeping. 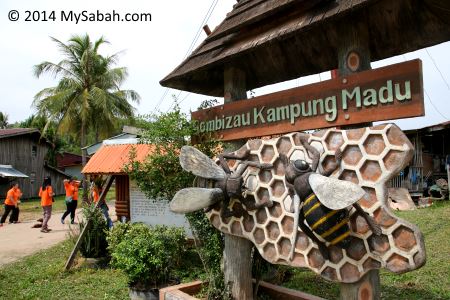 Kampung Gombizau is in Matunggong and about 2-hour drive from Kota Kinabalu City. When you head to Kudat town, you will see a brown signage “Gombizau Honey Bee Farm” at the roadside, about 40 KM before the town. Turn to that junction and you will reach Gombizau (See location map), after driving two minutes on a small paved road (watch out for potholes). 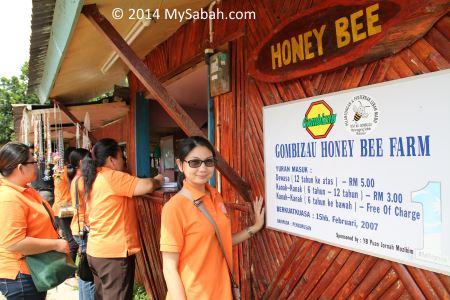 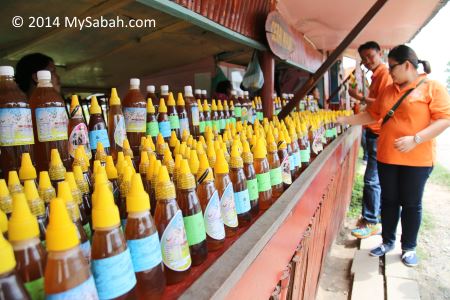 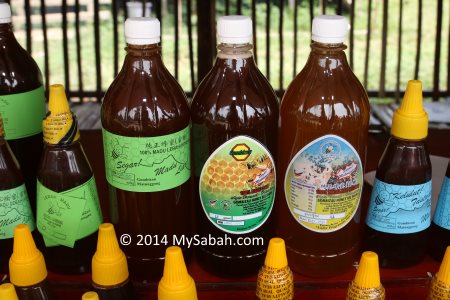 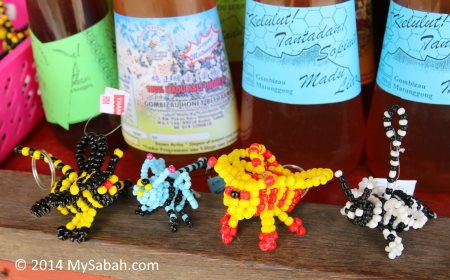 Pic: cute honey bee handicraft made of beads, available for a couple of dollars. The villagers are Rungus people, who are skillful in making beadwork. 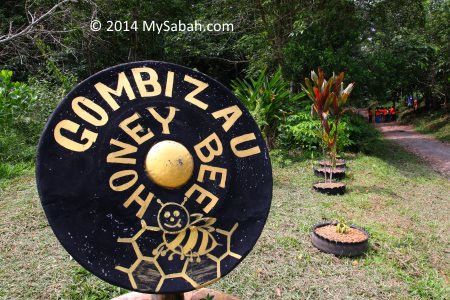 Gombizau is a real village with a population of 260 and not an industrial area. A villager led us to a rubber plantation about 30 Meters behind the village, where the bee farm located. 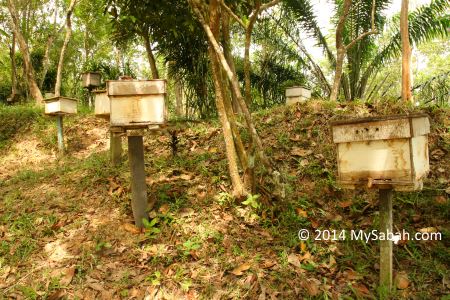 Under the shade, there are dozens of “honey bee hotels”, the man-made bee hives for the honey bees. The most common bee species in honey bee farm of Borneo is Apis cerana (Eastern Hive Bee). 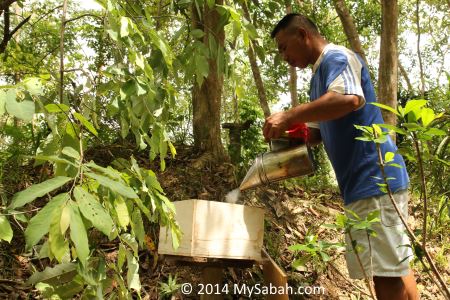 A worker showed us how to collect honey. First he used smoke to neutralize the attack-induced scent (pheromone) released among the bees. 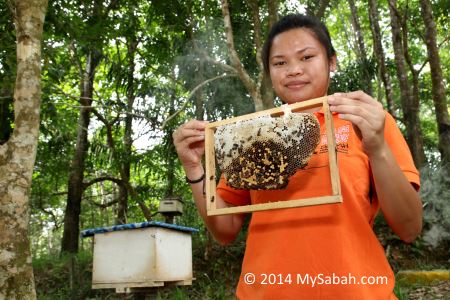 Then he opened the top cover and took out a movable frame hive, to which honeycomb attached. There are about 7 movable frames in a box. This allows the beekeepers to take out the honeycomb, harvest part of it and put it back, without damaging the nest structure, otherwise the bees would abandon the hive. 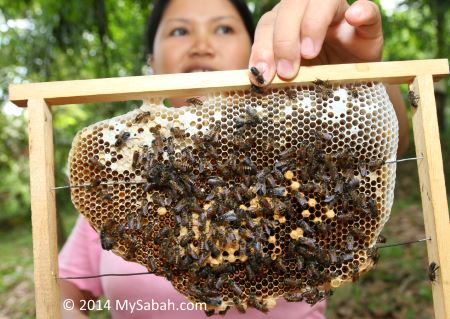 The whitish top portion are honey cells sealed by wax capping. The middle parts are cells filled by pollen, the color is depend on type of flower visited by the bees. Pollen is the only source of protein for feeding the broods. Some cells contain pupae, which is edible and rich in vitamin and minerals. Note the bee on her finger. It’s a drone (male honeybee) without sting. Drone is developed from unfertilized egg (with only one set of chromosomes), a son without a father. All worker bees are female developed from fertilized eggs (diploid). 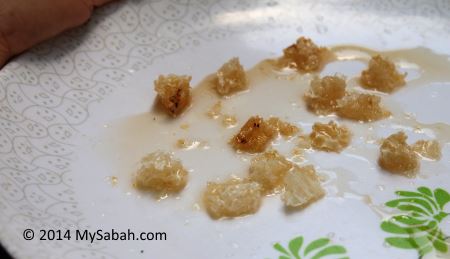 They cut the honeycomb into small pieces and invited us to taste the golden sweetness of raw honey. It’s really sweet, with a flowery aroma that is absent from sugar.

Before I left the village, I would like to buy some honey. I thought there was only one type of honey, then I found out there were 3, each with different price tag. So I asked the villagers if these are due to difference in quality. According to them, farm honey is the cheapest (RM20 per bottle), wild honey is 2nd (RM32), and the most expensive honey (RM38) is from stingless bee (Trigona genus). You had seen the farm honey bee, so what are the other two? 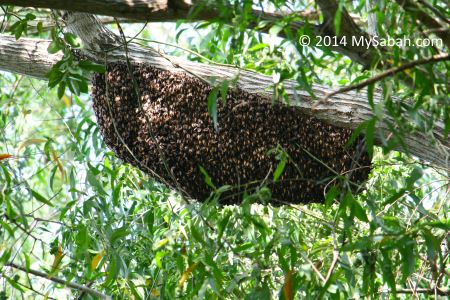 Most wild honey is collected from the nest of Giant Honey Bee (Species: Apis dorsata, Local Name: potiukan). Giant Honey Bee is open nesting bee so you can’t farm it in cavity like other honey bees. Besides, Giant Honey Bee is aggressive and considered one of the most dangerous animals in Borneo, its sting can penetrate fire fighter’s uniform, so honey gathering is carried out at night. They build their hive under the branch of tall tree (over 50 Meters high in many cases), and native honey hunter needs some guts and skill to climb up there in total darkness to harvest it. Each hive stores over five litres of honey and can be sold for RM200 (≈US$62) per litre. 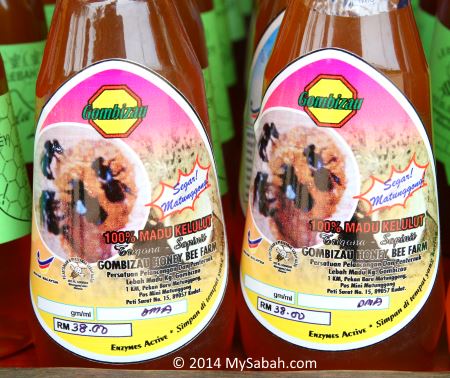 The next honey bee is Stingless Bee (known as Kelulut locally). Its honey is sweet and sour in taste. It is the most expensive because it is the hardest to extract. 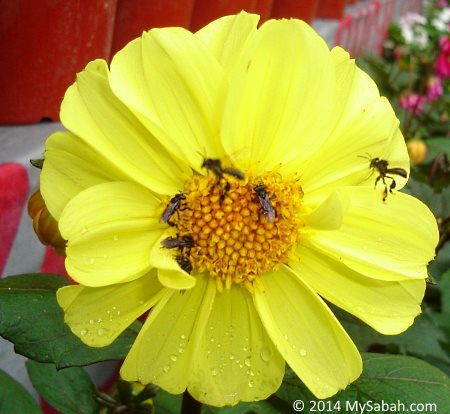 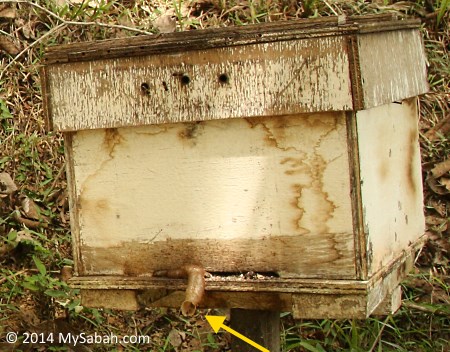 Stingless bees are quite common, even in sub-urban area. You can see them nest in crevice of houses and tree holes. 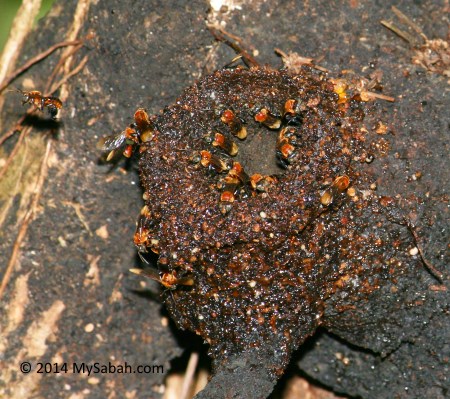 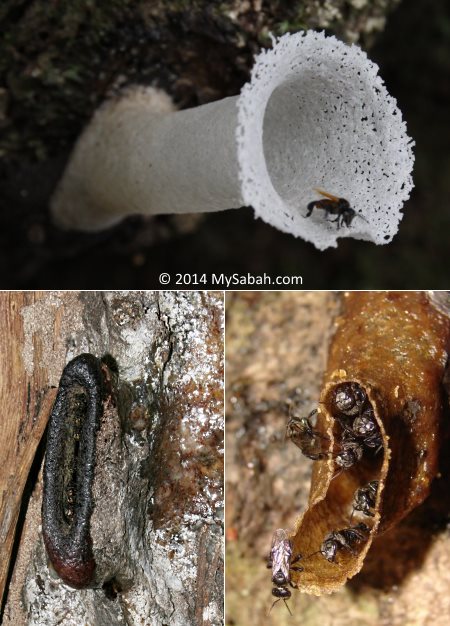 The most distinctive feature of stingless bee nest is its tube-like wax tunnel as the opening of the nest. When I was a naughty kid, I liked to pinch the tunnel to close their “door”. They don’t sting. The only defence they have is to secrete something sticky onto my hair, so I didn’t give them due respect. Now I know that stingless bee is also an amazing bee.

If you want to learn more about honey bees, I highly recommend the book “Honey Bees of Borneo” (by Nikolaus Koeniger et al). A lot of information of this article is from that book. I list a few interesting facts mentioned in the book: 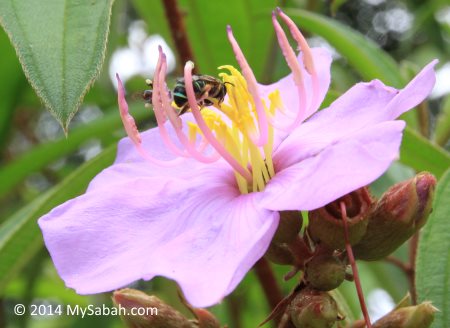 Pic: honey bee and stingless bee on a flower

Between year 2005 and 2009, Sabah imported about 341 tonnes of honey product, which is worth about RM5 Million. During the same period, only 26 tonnes of honey was produced in Sabah State. This means the demand for honey is high, and our honey has big market.

A Need for Standard & Branding

The authors of “Honey Bees of Borneo” also urge for the development of an international quality standard for Asian Honey Bees. Currently the quality standard of honey is based on Western Honey Bee (Apis mellifera), the most researched and farmed honey bee in the world. The biochemical characters of Asian and Western honey bees are different, so the honey of Asian bees would be graded as low quality, if the criteria is based on Western bee standard, it is like comparing orange to an apple. 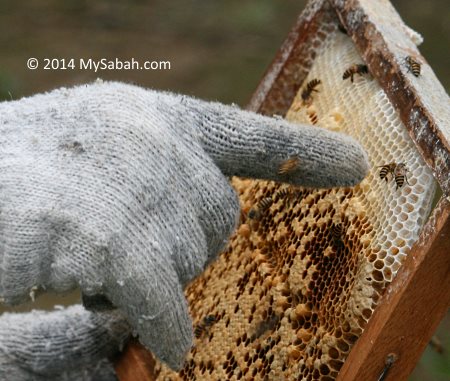 A small bottle of imported honey can be priced over RM50 in the market, but we sell 1-litre of local honey for only RM25. Is foreign honey really SsssOOOooOOo…. much better than our honey? The most expensive honey in the world is ‘Elvish’ honey from Turkey, which costs US$6,800 per Kg, because it is extracted from a 1,800m deep cave. Hey, Borneo is richer in flora (flower & herb) variety and our environment is cleaner. Can’t our honey ask for a premium price too? 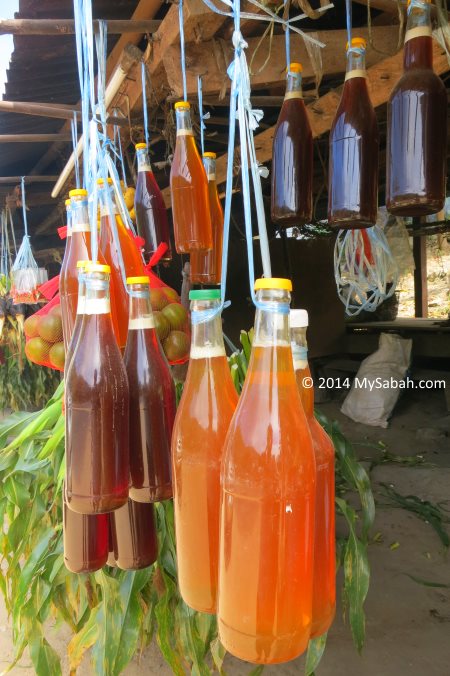 Not only that, our honey is also lack of nice packaging. Most Sabah honey are sold in a glass bottle in the market and roadside without any label or quality seal. Would you pay RM100 per bottle for such presentation? There have been complaints about adulteration of honey too. 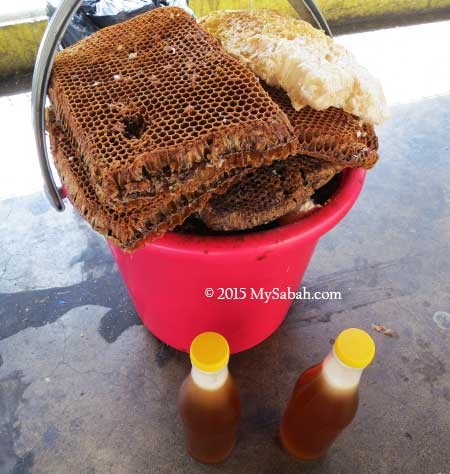 Nevertheless, there are a few local companies try to package and brand our Borneo honey, which is a good move. But we still need an official quality standard for Asian honey, so we can compete with Western honey in international market. Otherwise our local farmers will dump indigenous honey bees and farm only Western honey bee, a more profitable species. 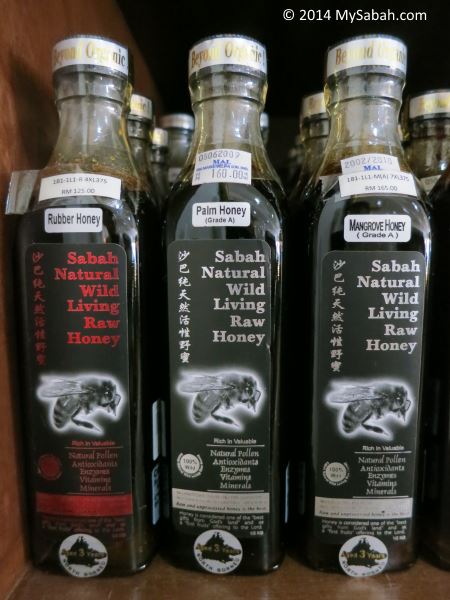 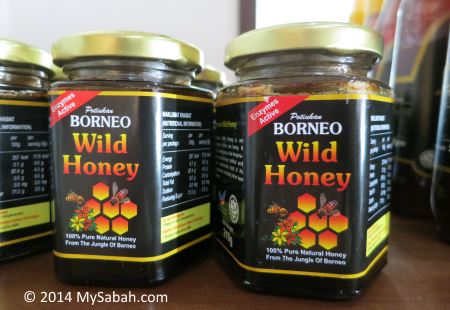 Two months ago, I visited Melita Honey Farm in Tasmania, Australia. The range of their honey products is impressive, you can find ANYTHING related to honey, such as ice-cream, skincare, soap, lotion, candle, mug, candy, toy and medicines, so colorful… The shopping experience was so fun that I bought a lot of things. This is something Sabah should learn from the others. 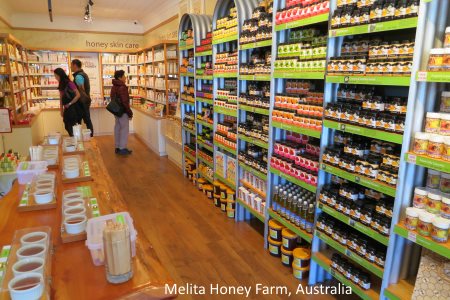 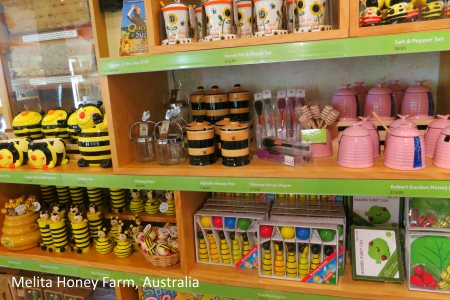 Do you like Sabah honey? Please tell me what you think about our local honey.

Stingless Bees and Other Bees 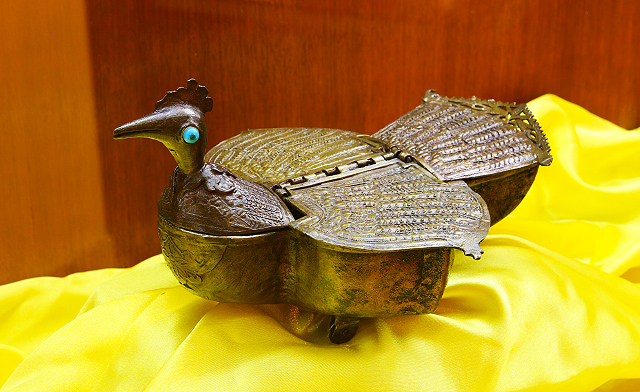 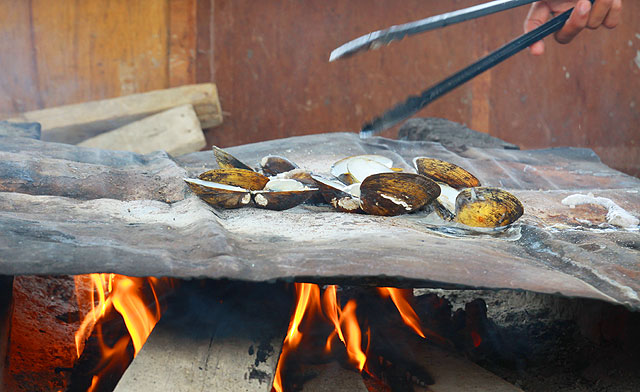 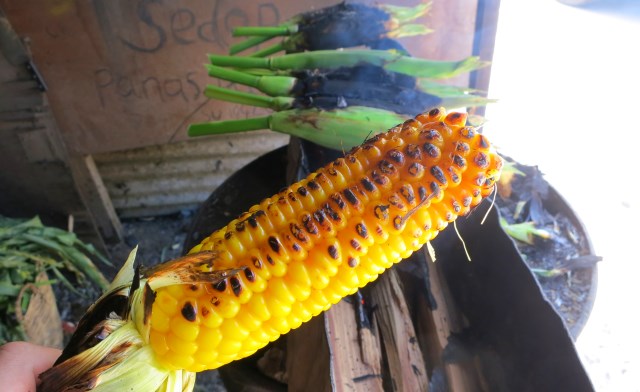