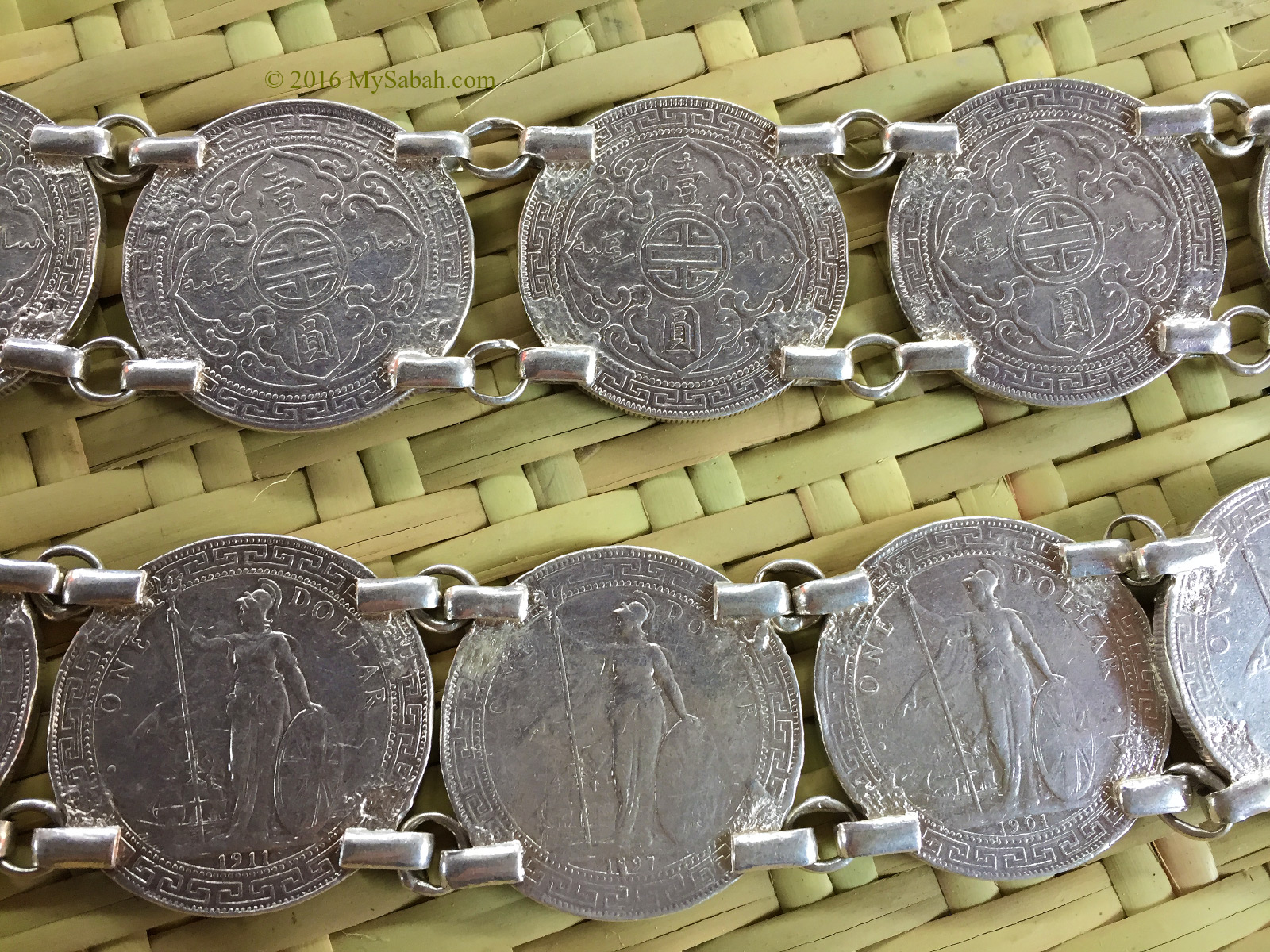 A guy is lucky if he is born with a silver spoon in his mouth. It’s a blessing if a Kadazandusun lady inherits a himpogot from her mother. Himpogot is a “money belt” made of 18 or more British silver coins chained together, and it is the most shiny accessory of traditional costume of Kadazandusun, the largest indigenous group of Sabah.

In old days, wearing precious metal such as silver is a way of showing off a person’s wealth. Now himpogot is a symbol of elegance and classy beauty. The “ori” (original) himpogot means antique silver coin belt passed down (to daughters normally) as heirloom from ancestors and it’s very rare now.

Therefore, due to its rarity, it’s a great pride for a Kadazandusun girl to wear a full set of 3 sparkling ori himpogot belts, which weigh more than 1.5 Kilograms, about as heavy as a big bottle of mineral water. The term Himpogot is derived from the Kadazan word pogoton, which means to tighten the tie.

Himpogot is widely used in traditional costumes of native tribes in Borneo and have different names, e.g. Botungkat in Dusun, Pipirot Linggit in Murut, and Sementing Ringgit in Iban. The way Himpogot being worn is also different among ethnic groups.

The “standard” way of wearing himpogot is usually referring to Kadazan Penampang style. A maximum of three himpogot belts are used, one on the waist and another two, before and after the tangkong brass belts. This looks beautiful with black velvet dress with gold trimmings (siling).

In contrast, Dusun Lotud uses one himpogot together with Lilimbo (Rattan Hip Band), whereas Dusun Tempasuk from Kota Belud will wear up to 3 himpogot on the hip. Kadazan Papar ladies use one on the waist and 2 or 3 on the hip.

Though Iban is considered as a Sarawak tribe, Sabah has some Iban people living around Sipitang and Tawau too. In addition to silver coin waist belts (Sementing ringgit), Iban female also wears the dangling silver coin chains on skirts, hundreds of coins are used, pretty impressive. But Iban has its whole way of using and wearing silver coins, and I won’t cover more.

The prices of himpogot can vary considerably. The “ori” (original) himpogot can cost more than 1,000 Ringgit. The fake or imitation ones usually cost from RM90 to RM200, depending on the quality.

The original Tangkong brass belts also cost a fortune. A complete set of 3 tangkong and 3 himpogot belts can worth over RM15,000 (≈USD$3,750). But these are traditional jewelleries that are seldom available for sale.

Most of the time I only see old British coins used in himpogot. The most common coin being used in himpogot is the British Trade Dollar issued between 1895 and 1937 . This silver coin consists of 90% silver and was used to be a ‘Trade Coinage’ (coins manufactured by one country for use in another country) widely circulated in China, Hong Kong, Malaya, Borneo and Brunei as an international currency in early 20th century.

Now let’s play a game to see if you can identify an original himpogot. There are two himpogot below, tell me which one costs RM3,500 and RM150. Guess. Don’t scroll down too fast for answers ok.

On the coin is the Britannia standing on a shore, holding a trident in one hand and a shield in the other, with a merchant ship under full sail in the background. This coin was known as Ringgit Tongkat (Walking Stick Dollar) and Botungkat (having a stick) in Malaya and some Dusun respectively because of this figure. Britannia is the female personification of the British Isles and she symbolizes unity, liberty and strength. The Britannia side must face outward when himpogot is worn.

Answer: The second (bottom) himpogot is valued at RM3,500, while the one on top is only RM150. Have you gotten the right answer? The average price of each coin in ori himpogot is RM184! I checked eBay and found these coins are worth more than USD$50 each (collector’s quality). FYI, each coin has different value. Anyway, their prices exceeds silver value due to their numismatic (coin collector) appeal.

Look at the photo of RM150 himpogot above. The words and graphics have shallower emboss and the surface is more whitish in color. According to the seller, the shiny surface is a plated silver. Another thing you can see is the year on these coins are all the same.

Now look at the original himpogot above. The British trade dollar coins are naturally worn and have different years. The weight of this .900 fine silver coin is about 26.95 g. Stanis, the seller, says the real silver coins will make crisp ding-ding sound when hit each other, whereas the fake coins will make “ta-ta” dull sound. It’s a fake too if it is magnetic. You can read this article to spot counterfeit British Trade Dollar.

Above are three original himpogot that costs (from top to bottom) RM2,500, RM3,000 and RM3,500. It costs RM9,000 if you want these three belts as a complete himpogot set! On the reverse of the coin is an arabesque design with the Chinese symbol for longevity in the center, and the denomination in two languages: Chinese (壹圓 = One Dollar) and Jawi ( ساتو رڠڬية‎ = One Ringgit). You can learn more about the history of this coin.

Sometimes other silver coins are used in himpogot, like the Mexican coin above and the following copper-nickel 25 Pence in 1977 that celebrated the Silver Jubilee (25th Anniversary) of Queen Elizabeth’s reign, Straits Dollar, and Hong Kong Silver Dollar. Himpogot with coins that aren’t drilled with holes has higher value.

If you want to buy original himpogot, you may look for the stall of Mr. Stanis in Tamu (open air weekly market) in Donggongon town, which is open in Thursday and Friday mornings. His stall is the largest handicraft stall in the middle of tamu.

However, these himpogots are stored in his little treasure chest. You can ask him to show you. You better hurry. Last time I mentioned about his RM8,000 Tangkong and it was sold. Original himpogot is a rare and highly sought-after item, so I’m sure it’ll be gone soon. No, he didn’t pay me any commission or ad fee.

Special thanks to Anne from Chanteek Borneo Gallery for providing a lot of information about Himpogot. 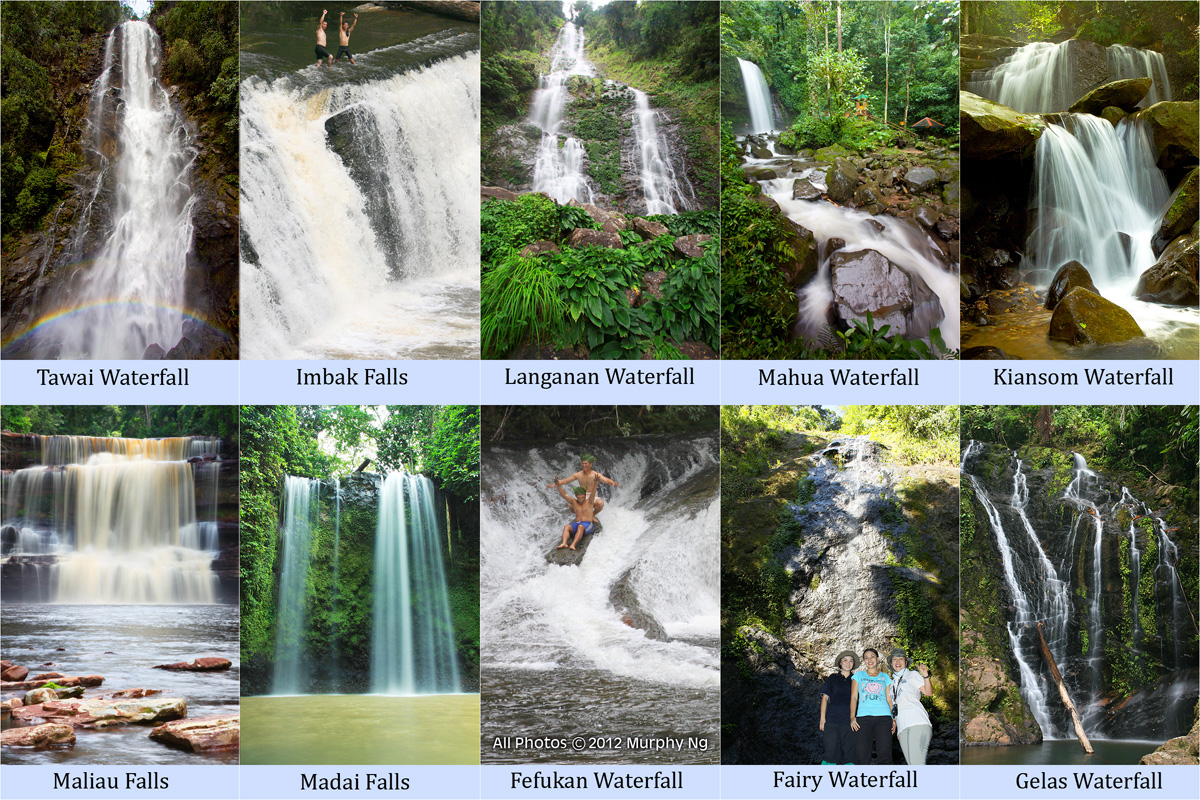 2 thoughts on “Himpogot, the money belt”