The friendly smiles, the rich colours and the interesting display of our cultures will bring you back to Sabah Fest every year. “Harmony in Diversity” is the theme for Sabah Fest 2008. Diversity? Guess how many ethnic groups we have in Sabah? Even Sabah Cultural Board is trying to figure out. We have about 30 ethnic groups. Each ethnic groups also have 2 or more “sub-ethnic”. So… if all adds up, we have over 100 tribes!

Below are two costumes that my camera likes to lock-on. Left is a Dusun Tindal girl. In case you are curious about the two balls at her chest (I mean the silver ones lah). They are small containers that can store small stuffs such as tobacco and betel nut. The right is a Dusun Ranau girl, cute right? 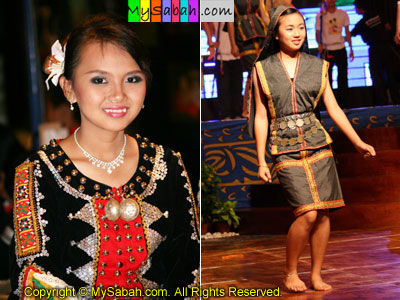 The ticket to watch the 1.5 hours cultural show is only RM30 (less than USD10), which I think is really undervalued. There are lot of beautiful things to photograph. Just press the shutter then you will capture something nice. Many bloggers were there too, most of them gathered at the left side of the stage. I carried a tripod and didn’t want to accidentally step on their bodies, so I was at the right side.

Besides Tagal Murut people from Ulu Berkuku and Ulu Tomani, very interior and remote area of Sabah, another “rare” guest was Cocos people (photo above) from Lahad Datu. They are of Scottish and Malay descent, originated from Keeling Islands (where is it huh?). They are so different from other indigenous groups. Not only their costumes, their Dansa dance and music are like something totally from Europe.

The Igal Tabawan by Sea Bajau was also a pleasure surprise. It is cool to see hundreds of long tin foil nails moving, though I wish they could do interesting formation like thousand-hand Buddha. 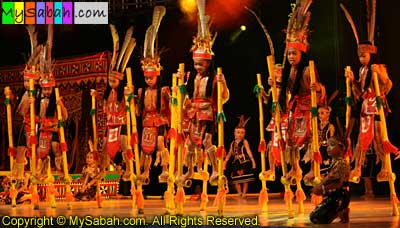 The most impressive and creative dance was the Pangkulian by children from Kiawaian school of Tambunan town. They look so… cute in Murut costume. They used bamboo to create various types of interesting performance, dances and moves. Even the drum players
were the school boys, amazing… I was also so happy to see involvement of young blood in local culture. 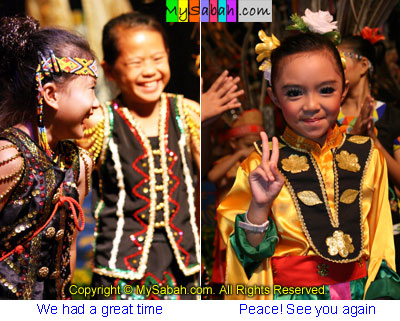 The performers have done their part on stage. Now I am trying to show the beauty of our cultures online. FYI, the high quality photos are in my photo gallery. To make my blog loads faster, I use low quality setting for my photos in write-up here. I took most of the stage photos without flash, but with the aid of tripod and image stabilizer len. I used ISO 800 instead of 1600. Unlike Canon 40D, I find the noise level in ISO 1600 photos of my Canon 400D is not acceptable. Overall the outcome is quite ok. I hope you like the photos. After seeing the excellent photos from other bloggers, I think I can retire liao..