Orangutan in the Swamp

Orangutan is a rainforest animal and it dislikes water, so I was surprised to see an orangutan foraging in swampy area of Kinabatangan last month. Actually this is not the first time it is found wandering in nypa forest, so I’m sure it wasn’t lost. 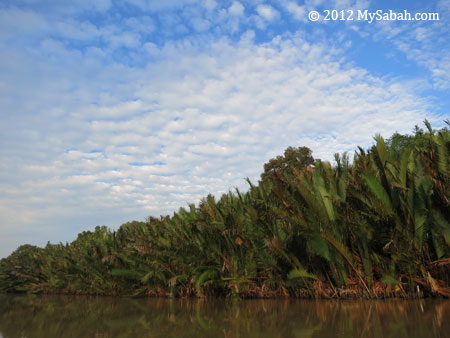 Nypa (or Nipah) palm swamp exists for over 70 millions years and it is one of the oldest forest types in the world. A large and well-preserved area of Nypa palm swamp grows around Abai, along the downriver of Kinabatangan River. 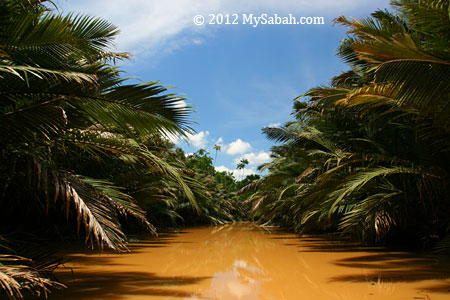 Nypa forest is a swampy area with brackish water. Nobody wants to walk in Nypa forest, as its ground is muddy. Also, the number of mosquitoes there can suck your blood dry. Due to the semi-saline water and seasonal flood, very few plant and fruit species can flourish there. In short, Nypa swamp is a hostile environment to most animals. Egret, heron and wild boar go there sometimes, but they never call it home. 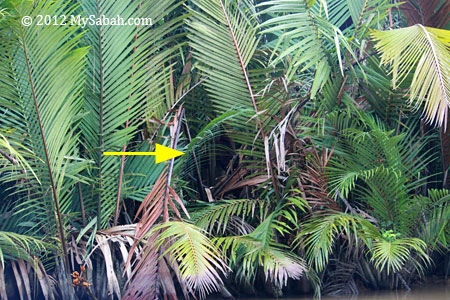 It was a quiet morning. I was on a birdwatching tour with friends in mangrove and nypa zones of Kinabatangan wetland. Our small boat entered a tributary of Kinabatangan River and cruised slowly in dense forest of Nypa palm. Instead of bird’s chirping, we heard loud noise of rustling leaves. We looked at the direction of the sound and saw the palm leaves shaked violently. There was something moving inside, and it was big. 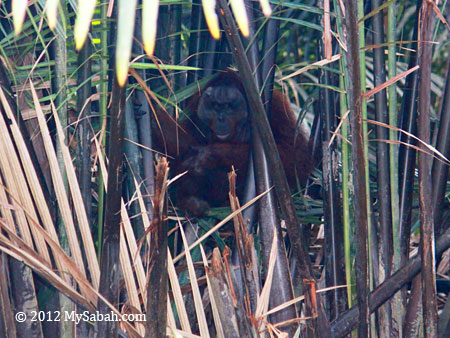 The beast was moving slowly behind the Nypa palm along the river. We couldn’t see it, so we just followed the rustling leaves, hoping that it would show up near the river. After 10 minutes, our patience paid off and we saw it passed by a small opening between trees, for a few seconds. Affirmative, it’s an orangutan. 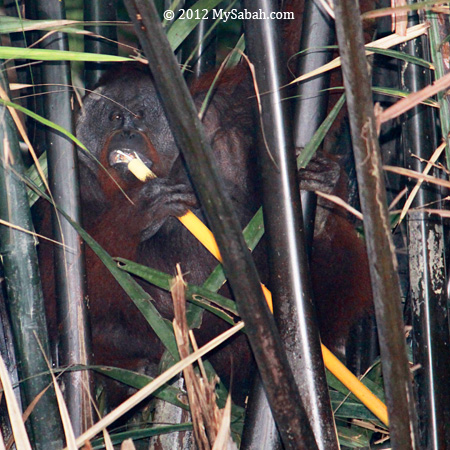 This orangutan stopped a few times to fall the palm trees. The palm is as big as my arm, and this orangutan could shake, bend then broke it easily. After crackling sounds of broken branch, there would be a long moment of silence, but we still could hear that it was munching something crunchy. 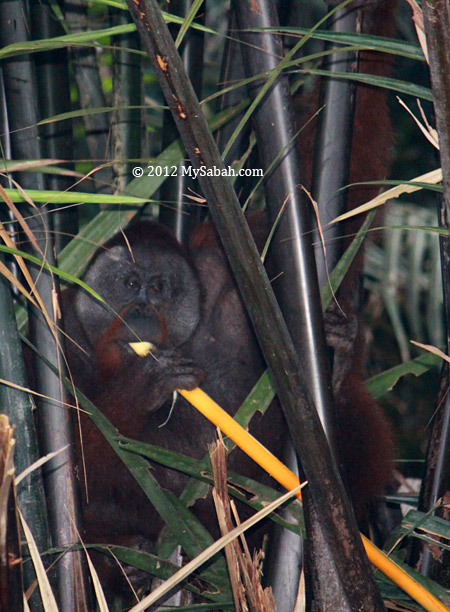 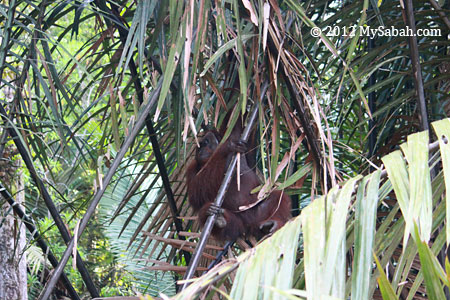 The orangutan noticed us but not quite bothered about our presence. It just continued its food journey, almost breaking all the branches it grabbed. As mentioned, Nypa swamp is muddy and orangutan hates water, so it was climbing from tree to tree, to avoid getting wet in mud. Orangutan is smart. If it has to enter the water, it knows how to use stick to test the depth of water. Someone even saw orangutan eating fish. Probably orangutan knows how to fish too, LOL. 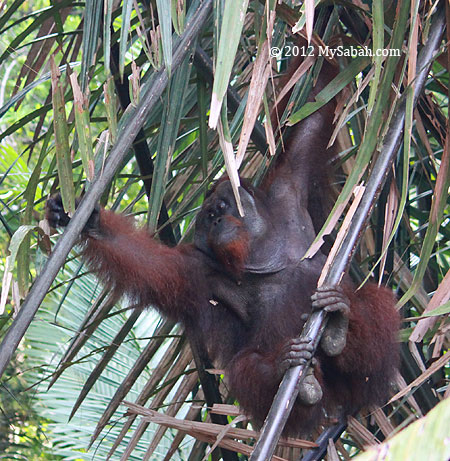 You can tell this orangutan is an adult by looking at its cheek pads called flanges. Unlike other primates, orangutan is a solitary animal and spends most of the time alone.

Below are more photos for your viewing pleasure. Such unusual scene and behavior are not something we see every day. 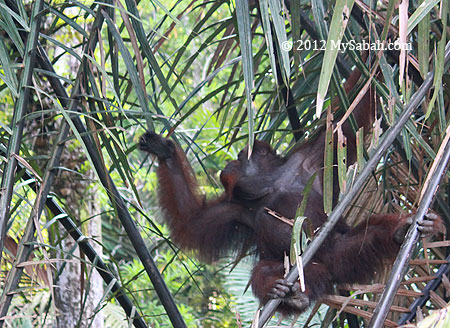 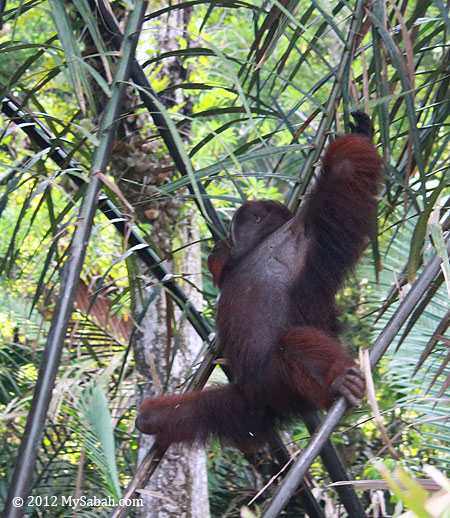 Normal tourists seldom visit this area so we have the cool view all for ourselves. 🙂 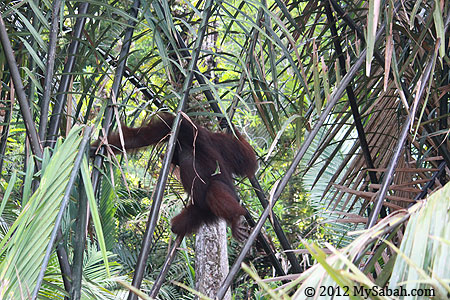 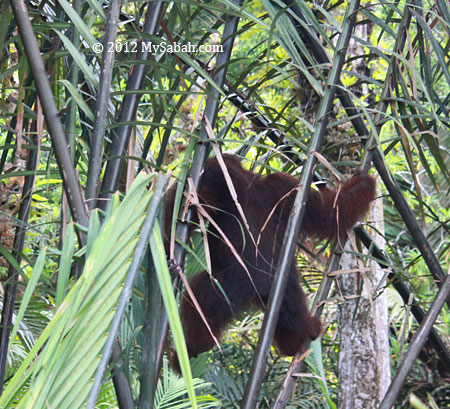 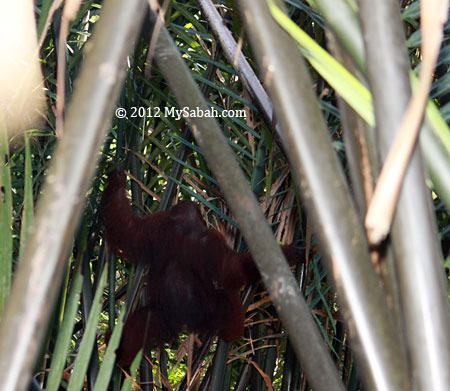 We saw other damaged Nypa palm next to the river and believed these are done by orangutan. 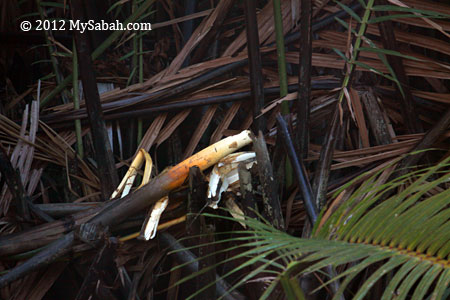 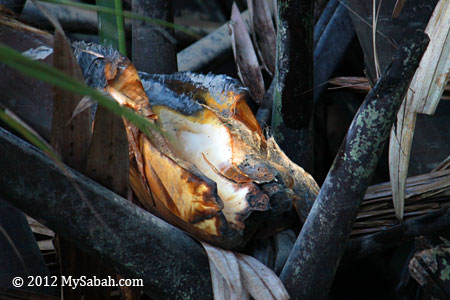 No doubt it was an interesting encounter. However, I’m very curious that why orangutan hunts for food in Nypa palm. Is it because orangutan can’t find enough food in rainforest nearby, or it loves the taste of Nypa palm? I wonder..